For seven years observers have attempted to discern what Barack Obama’s foreign policy is since the closest he has come to articulating one was the inane declaration he made to reporters on Air Force One: “Don’t do stupid stuff.” The result is that the Leader of the Free World has abnegated his responsibility and put America and its allies in great danger.

Mr. Obama viewed George W. Bush as a menace and was determined to show the world he is the anti-Bush. Whatever one may think of Mr. Bush, he was a man of action and his sins were those of commission. Mr. Obama’s sins, however, have been ones of omission. His fear of doing anything stupid has paralyzed his foreign policy for much of his presidency.

Paradoxically, his first foray into foreign policy was did little to inspire confidence. He decided to put Israelis in their place in the naïve belief that sympathizing with the Palestinians would somehow bring about peace. Instead, he succeeded in creating distrust among Israelis, which has only grown worse during his tenure, and the Palestinians made a fool of him by refusing to engage in negotiations and rejecting his envoys’ peace initiatives. Worse, the Palestinian Authority openly defied the president, demonstrating from his first year in office that he was weak.

About the same time, he did something equally misguided by going to Cairo and appealing to the Muslim world to accept his promise that America did not see Islam as the enemy and promised his friendship. In addition to looking weak by reversing his predecessor’s policy and appearing fawning, he made the mistake of speaking in a country run by a dictator known for abusing human rights and muzzling his Muslim opponents. The message he unintentionally sent was that he would be no different than his predecessors when it came to allying with Arab autocrats so long as they were pro-American.

When the Arab Spring shocked the Obama administration, he also did something that Middle East experts knew would be disastrous, namely, siding with the radical Muslims of the Muslim Brotherhood. Mubarak was a terrible autocrat and the Egyptian people deserve to be free. But the Brotherhood is one of the region’s original terror groups and the inspiration for many of the radical Muslims we are fighting today.

While many Americans applauded his evacuation of troops from Iraq, President Obama failed to see the bigger picture in the region. Yes, lives of soldiers were saved in the short-run, but the absence of U.S. forces left a vacuum that is now being filled by Iran, al-Qaeda, ISIS, Kurds, Turks and others. So long as our troops were in Iraq, Iran had to worry about the possibility that they would turn toward Tehran and use force to stop its nuclear program. Once that threat was gone, and Obama’s seeming desperation for a nuclear agreement on any terms became clear, the Iranians knew they had nothing to fear from this president.

The Iranians, the Russians, and the radical Muslims also were quick to fill the vacuum created by the dissolution of Syria. They were emboldened by another demonstration of Obama’s weakness when he announced that the use of chemical weapons by the Assad regime was a red line that would trigger a military response and then did nothing when the evidence of their use was presented to him.

Vladimir Putin took the measure of Mr. Obama, and demonstrated the absurdity of Hillary Clinton’s notion of resetting our relations, when he convinced Mr. Obama to abandon Bush’s plan to build a missile defense system in Europe. Like a grandmaster playing a novice in chess, Mr. Putin checkmated Obama in Eastern Europe and, seeing his naiveté, invaded Ukraine, defended Iran, and is now wreaking havoc in Syria.

Mr. Obama’s most glaring omission was on display in the carnage in Paris. His stubborn refusal to acknowledge that a war is being fought between radical Muslims engaged in a holy war against non-Muslims has allowed this cancer to metastasize around the world. Does he really believe that ISIS won’t come to our shores?

After doing everything possible to avoid entanglement in Syria, and refusing to use America’s might to destroy ISIS, the people of Syria, Iraq and now France have reaped the whirlwind. Even now, Mr. Obama is reluctant to take the necessary measures to defeat not only ISIS, but the Iranian-sponsored Shiite terrorists who are no less dangerous than the radical Sunnis.

President Obama’s policy has been weak and vacillating. It is too late to reverse much of the damage he has wrought.

The killing of Jews in France, Israel, and the West Bank, as well as the atrocities in Paris, are not “random” incidents, they were intentional murders. When Mahmoud Abbas calls on Palestinians to defend the al-Aqsa mosque against the fictional Jewish threat to destroy it, he is inciting Muslims to murder non-Muslims. Still, the president cannot muster an unambiguous condemnation of this evil.

George Bush had a straightforward world view that recognized our enemies. Now we hear the president of France and the Prime Minister of Great Britain openly acknowledge the war with radical Islam. The Pope put it best when he said the attacks in France are part of a Third World War and that the international community would be justified in using force to stop “unjust aggression” by Islamic State militants.

President Obama’s policy has been weak and vacillating. It is too late to reverse much of the damage he has wrought. Nevertheless, he must admit that radical Islam is a threat to our security and begin to fight the world war with all the resources at his command. It is time for the Commander-in-Chief to lead the Free World from the front rather than from behind.

Rabbi Shmuley Boteach whom The Washington Post calls “the most famous rabbi in America” is the founder of The World Values Network and is the international best-selling author of 30 books, including his most recent, “The Israel Warriors Handbook.” Follow him on Twitter @RabbiShmuley. 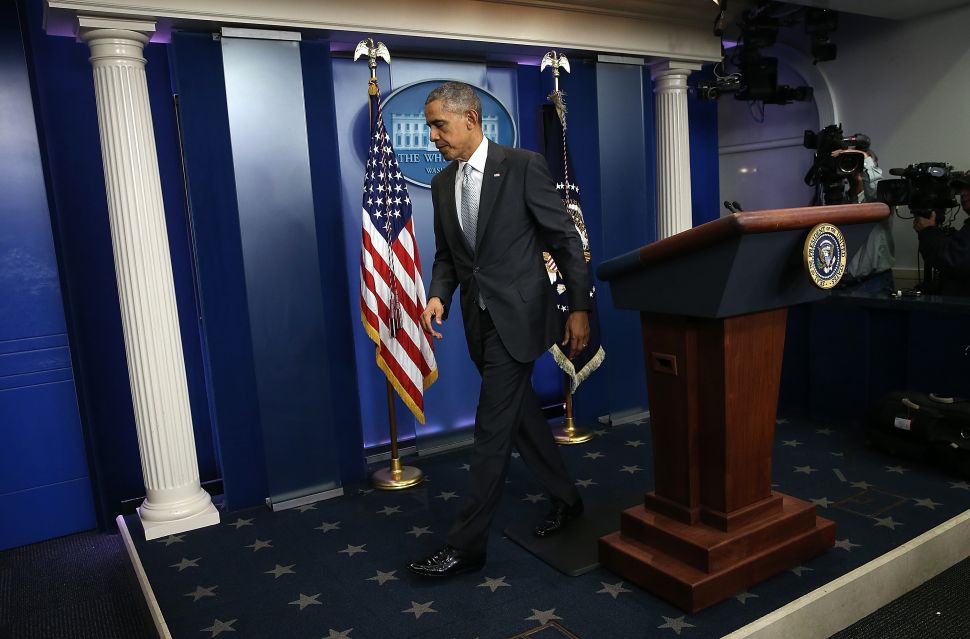