On a winter evening  in 2008, my dachshund Hanno did something  that dachshunds are apparently inclined to do. She crawled inside an American Apparel hoodie tossed on the couch. And she kept crawling—through the sweatshirt, up through the sleeve and out.

Well, not out. Because Hanno got stuck. In the sleeve. Like an idiot. 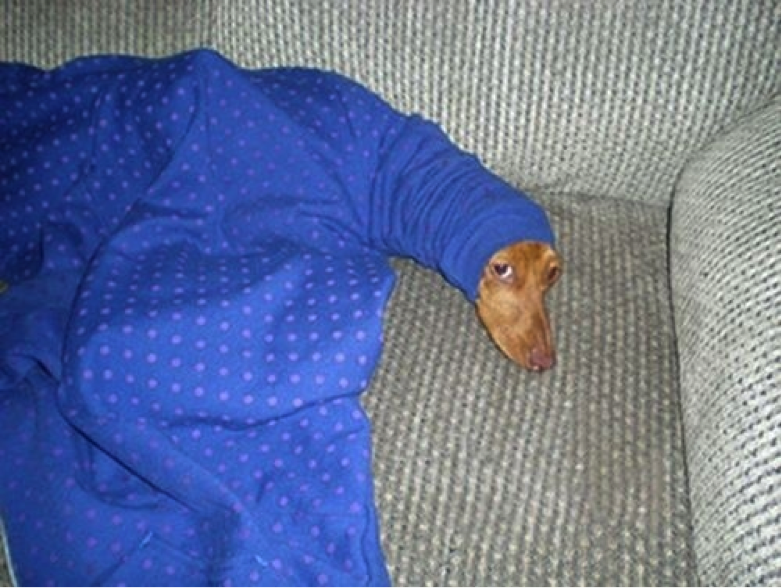 I don’t recall who took the photo, whether it was me or my wife. In any case, it immediately became a hit with our friends (one friend actually dressed up as Hanno-in-a-sleeve for Halloween). And not just our friends. At the time I owned a little website called FailDogs.com—a Tumblr blog that featured pictures of dogs failing in ways that only dogs seem to be able to do. The photo went up there and received tens of thousands of views.

That was pretty much the end of it. I sold the site to Ben Huh, the founder of LOLcats later that year in exchange for a dollar and a certificate commemorating the achievement (it was later rolled into FailBlog.com). I never cashed the check but considered it my first win as a businessman. The time our dog got trapped in a sweatshirt was little more than an inside joke between my wife and I for the next several years.

That is, until about two years ago. My wife sent me an email. All it said was “I can’t believe this. Check #20” and had a link to a BuzzFeed article with the headline: 21 Animals That Desperately Need A Hand.

Number #20 was Hanno. My dog, featured, as ‘This dog who has no idea what happened last night and why he’s wearing someone else’s clothes’. But more frustrating, the link was credited to bunnyfood.tumblr.com.

When one site steals an old photo of your dog, I guess you let it slide. Because after joking about it, we forgot. Besides, it’s not even the funniest example. Sometime after that, our dog did it again. I was in our apartment in New York City working on my book and all of a sudden, I heard a loud thump. Hanno had crawled even deeper in a sweatshirt and taken a nap. Only when she awoke did she realize, to paraphrase Heraclitus, that this was not the same sweatshirt and was not the same (slender) puppy.

Here she is on the floor, having fallen off the couch. She looks like she’s wearing a bodysuit. She refused to move until I fixed this all for her. 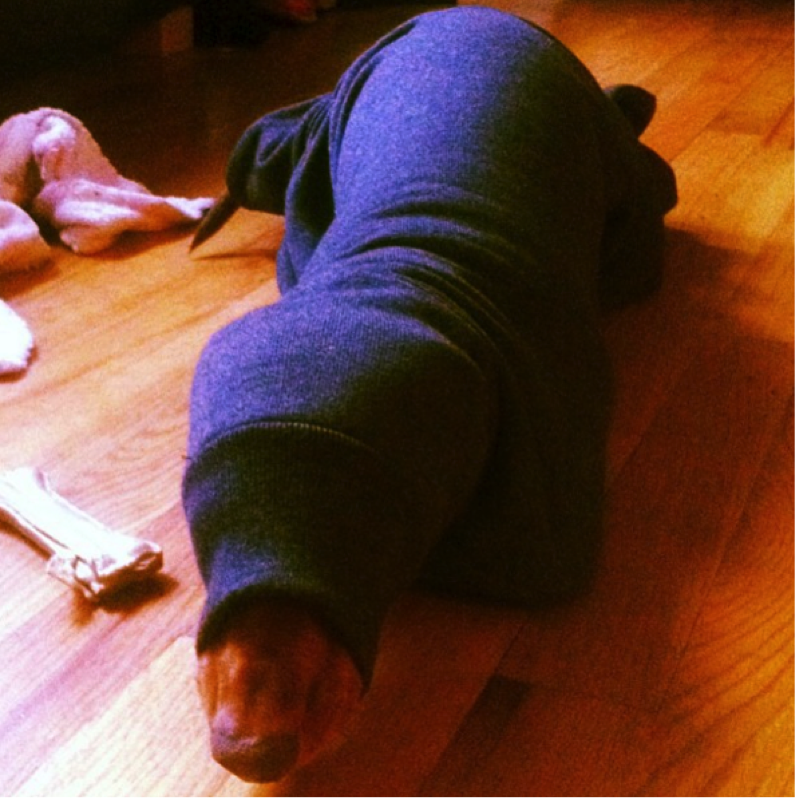 BuzzFeed has a reputation for stealing content. As Maddox, the notorious writer and one of the earliest critics of BuzzFeed has pointed out, entire lists have been stolen without giving credit to the original source. The stolen and preposterously lazy and incorrect attribution of the photo of my dog is proof. But they are not the only thieves—nor the most flagrant.

Over the last few months, I’ve tracked that photo to multiple other sites—was it virality or thieves, stealing from thieves? It’s funny. As a dog owner, I’m thrilled. Who wouldn’t want to see their cute little dog everywhere? (For my part, I have made it a point to include Hanno in my own presentations.) As a copyright owner, well, I’m less thrilled. Who are these people to jack photos and use them however they like—raising millions of dollars on the back of such content? The writer who’d “aggregated it” had gone from a contributor to a staff writer with more than 800 posts to their name. Now, the site, was slowly and covertly deleting embarrassing posts from its history over time, pretending as if it all never happened.

I do write a column about media after all. So I posted a comment on the account asking for credit and explaining that it was my photo. They directed me to another account that they’d taken the photo from. Is this what Instagram is fine being? A depository for stolen memes? I thought the site was supposed to be about photography—not reposting photos that other people took long before Instagram even existed.

Then I decided to reach out to BuzzFeed. I emailed the writer and their editor—I was nice and friendly. I just wanted to know more. How many views had this piece gotten? How did they find it? What kind of effort do they actually go to find the rightful owners? I thought we could have a fun conversation, and maybe I could learn a bit more about the journey of Hanno’s reply.

No reply. I emailed again. I was blown off, the writer told me she ‘didn’t remember much about it’, gave me the statistics on the post, but ignored all my questions. Less interested in having a fun conversation now, I reiterated, asking about their policies on credit and how they have changed over the last two years.

Since I clearly wasn’t going to go away, I was passed to a PR person. They probably googled me. I said look, ‘I’m beginning to feel like I’m getting a bit of the run around on what is a fairly innocuous and fun line of questioning.’ It felt like I was being jerked around. Only then did I get my answers.

My dog’s photo and the post has been viewed some 140,000 times. And as the publicist was nice enough to admit—again the only person involved who treated me with much respect—this was not the only post they used it for. Another piece had been viewed more than 660,000 times!

The Instagram posts by other accounts have gotten nearly 5,000 likes and over 1,000 comments combined. Who knows how many other places have featured Hanno over the years? How many people have emailed the photo or used it in presentations or jokes?

After all this, you wouldn’t have thought I’d have to specifically ask BuzzFeed to properly attribute the images, but I did. After a few days, they did correct it…but only for one of the two posts: (and a side note: Why don’t these writers link to the actual posts, not general Tumblr pages or archive pages? Even when they are giving “credit” they do it wrong). 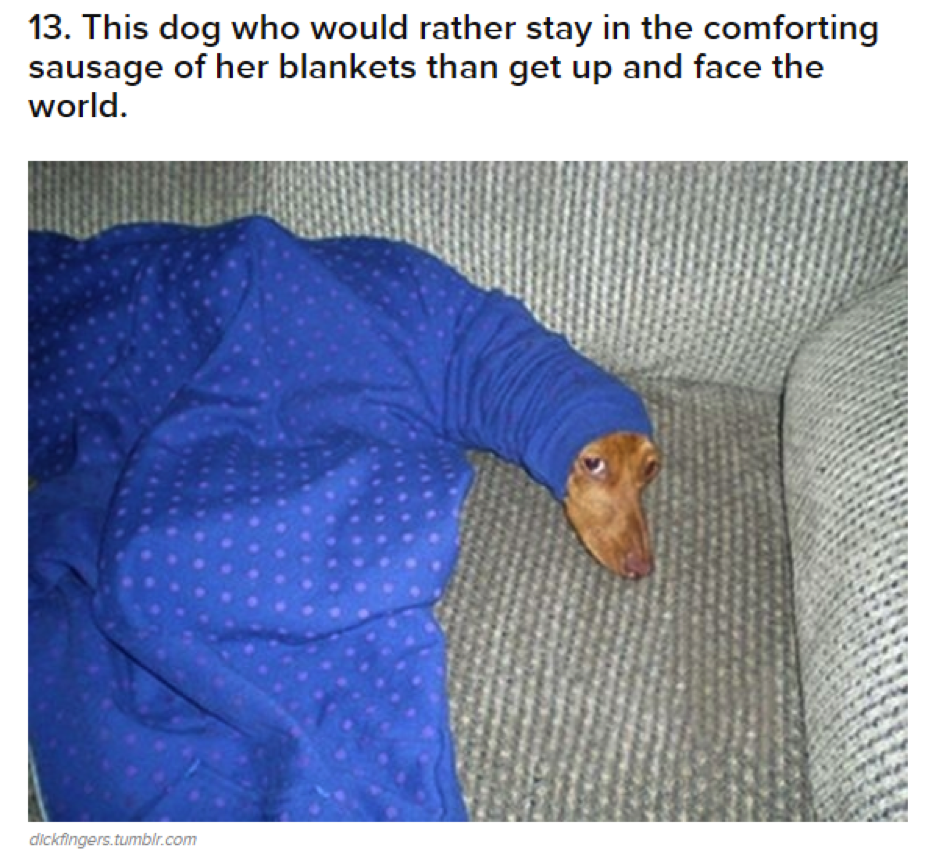 And though she is the one photographed doing something embarrassing, is she really the fail dog here? Or is it the billion dollar web companies who act like they aren’t?

I think the least BuzzFeed and Instagram could do would be to send her a box of treats. 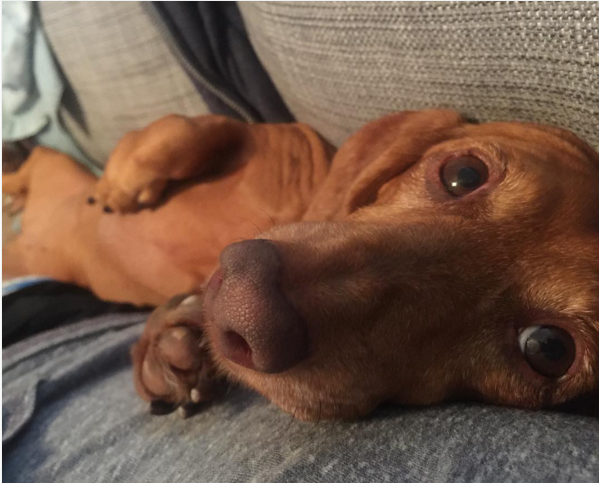