Good morning, it’s Thursday in New Jersey, where Democratic hopefuls are maneuvering for the next gubernatorial contest and state voters wish their U.S. senator will step down.
Quote of the Day: “The media coverage of Mr. Baroni and the bridge scandal is not only widespread, but also sensationalistic and so ‘grossly unfair’ that viewers cannot be reasonably expected to put it out of their minds,” – Michael Baldassare, attorney for former Deputy Executive Director of the Port Authority of New York and New Jersey Bill Baroni, in request to change the venue of the upcoming Bridgegate trial.

Angling for Governor, Sweeney Guest of Honor at Cunningham Fundraiser

Senate President Steve Sweeney is based in South Jersey but it seems that the 2017 gubernatorial hopeful is starting to make inroads in Hudson County.
Alyana Alfaro, PolitickerNJ Read more

Fulop and the ‘Fight for Fifteen’

On Tuesday, the national day of action in the “Fight for Fifteen” movement, Jersey City Mayor Steven Fulop and members of the city council passed a resolution calling on the New Jersey legislature and Governor Chris Christie to bump the state minimum wage from the current $8.38 to $15 per hour.
Alyana Alfaro, PolitickerNJ Read more

As Senator Bob Menendez (D-NJ) continues to face the fallout from a corruption indictment, a new Quinnipac University poll indicates that much of the public is against him. The indictment was based on the senator’s allegedly accepting bribes and gifts from Florida ophthalmologist Salomon Melgen.
JT Aregood, PolitickerNJ Read more

Traier, Yudin to Meet After Thanksgiving to Talk Congress

The process that will decide which Republicans will get their party’s nod in the 2016 congressional contest has get to really begin according to Passaic County GOP Chairman John Traier. Traier said that he and Bergen County Chairman Bob Yudin will sit down after Thanksgiving to come up with a list of potential candidates for CD9 where incumbent Democrat Bill Pascrell currently occupies the seat.
Alyana Alfaro, PolitickerNJ Read more

At the Tuesday council meeting, Hackensack swore in Deborah Keeling-Geddis as the newest member of the council. However, her election may cause a stir among members of the current leadership, according to a source.
Alyana Alfaro, PolitickerNJ Read more

What did you do in the war, Dad?

That was the question that Miss Connor, my 4th grade teacher at PS 277 in Brooklyn,wanted each kid in our class to ask his/her dad. We had an entire sheet of questions that Miss Conner handed out — you know, printed on mimeograph paper that had that rich chemical smell.
Joey Novick, PolitickerNJ Read more

Following Governor Christie’s conditional veto of a bill to offer payment in lieu of taxes to Atlantic City’s remaining casinos, Senator Jim Whelan (D-2) and Assemblyman Vince Mazzeo (D-2) said that they are frustrated with what they called the governor’s lack of clarity.
JT Aregood, PolitickerNJ Read more

N.J. Democrats vow to wipe out Christie veto of bill to boost voting

This week, the Center for Public Integrity released its State Integrity Investigation, a national ranking of state systems to prevent corruption and promote transparency. As the report noted, “No state saw its score fall farther than New Jersey,” which only a few years ago ranked first in the nation as a model for good government and now finds itself at the bottom of the rankings, earning a dismal grade of D.
Paula A. Franzese, The Star-Ledger Read more

Even before he resigned from the Port Authority as the heat over the scandal involving the lane shutdowns at the George Washington Bridge grew, David Wildstein knew he was facing bigger problems.
Ted Sherman, NJ.com Read more

Ever since a video of Gov. Chris Christie discussing how addiction claimed the life of a close friend went viral, the crowds at his Iowa events have grown larger.
Claude Brodesser-Akner, NJ.com Read more

The three City Council members who were provided health benefits in violation of state law said during Tuesday’s City Council meeting that they’ll pay the city back what the benefits cost taxpayers.
Jonathan Lin, The Jersey Journal Read more 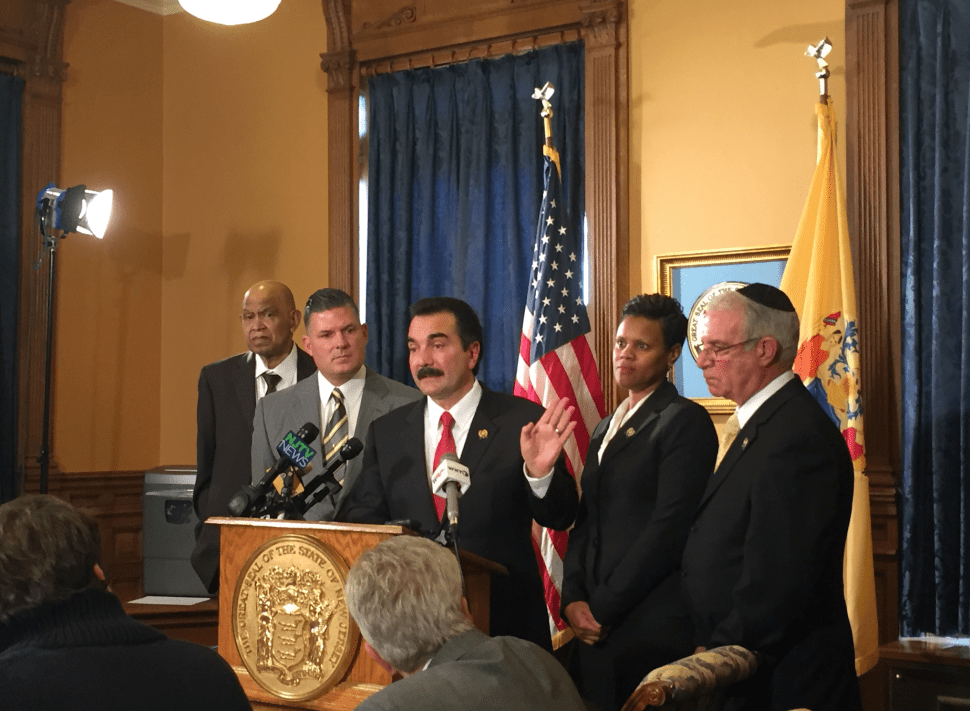