It’s Election Day in New Jersey, where dueling appearance by President Obama and Gov. Christie overshadowed the final day of campaigning for seats in the New Jersey Assembly.

Quote of the Day: “He’s utilizing this event here in Camden, with the Camden police department, or the county police department at this point, to move himself into the White House,” – Republican Camden County freeholder candidate Ian Gill, on Chris Christie’s visit to Camden city.

Obama Pushes ‘Ban the Box’ Initiative to Help Ex-Cons Seeking Jobs
As part of his trip to New Jersey today, President Barack Obama spoke at the Rutgers Newark Law and Justice Center. His main objective was to speak about two initiatives aimed at helping former prisoners “get their foot in the door” and get jobs after they leave the criminal justice system.
Alyana Alfaro, PolitickerNJ Read more

PolitickerNJ Scrapbook: Air Force One Drops in on Butler
It was the ultimate political insiders’ feast on the tarmac in Newark this afternoon as President Barack Obama descended the stairs to come face to face with Mo Butler, the apparent stand-in for an absentee Gov. Chris Christie.
Max Pizarro, PolitickerNJ Read more

The Political Context of Christie’s Love-Hate Relationship with Obama
Three years after hugging President Barack Obama down the stretch of a brutal presidential contest and infuriating fellow Republicans who said the public display of affection hurt GOP nominee Mitt Romney, Gov. Chris Christie has the war paint on as part of own sputtering prez bid, attempting to put exactly the distance between Camden and Newark on display as a show of just how much of a gap exists between himself and the Democratic president.
Max Pizarro, PolitickerNJ Read more

Monmouth Poll: For Christie in New Hampshire, a Sign of Life
Seemingly running in place in many of the summer and fall presidential polls, Gov. Chris Christie now shows at least some forward motion in New Hampshire, that state where the New Jersey governor continues to concentrate his biggest retail presence, according to today’s Monmouth University Poll.
Max Pizarro, PolitickerNJ Read more

Local Republicans Protest at Christie Appearance in Camden
Local Republican candidates gathered Monday to protest an appearance by Governor Chris Christie outside the Camden County Police Department’s headquarters. The protesters claimed that Christie has not done his part to support their candidacies, and was overstating the effectiveness of the city’s overhauled police force for political gain.
JT Aregood, PolitickerNJ Read more

Christie Takes Jabs at Obama, Booker at Camden Sighting
Governor Chris Christie continued his attacks on President Obama at a press conference Monday afternoon, where he said Obama was trying to take credit for criminal justice reforms effected at the state level.
“All these criminal justice reforms he’s talking about, none of them are issues of his. He has been pushed to this by others. And now all of a sudden he wants to take a victory lap at Integrity House? He wouldn’t even know what Integrity House was. Unless Cory Booker told him,” said Christie, referring to the state-funded drug treatment center where Obama was scheduled to meet with Senator Cory Booker (D-NJ) and Newark Mayor Ras Baraka that same day.
JT Aregood, PolitickerNJ Read more

Where Are the Christie Endorsers Now?
It’s been a mere two years since a roster of over 60 Democrats broke ranks and endorsed Republican Gov. Chris Christie.
In that time, many political fortunes – including those of the Governor – have changed drastically. Riding high at the height of his popularity back in 2013 – with some polls having his approval rating at 74 percent – Christie boasted regularly of his Democratic endorsements.
Brigid Callahan Harrison, PolitickerNJ Read more

LD31 Flare-up: McKnight Filing Complaint with Police Against Kopko
An apparently un-competitive election has turned into a crucible of passionate emotions in Hudson county. At issue – the characterization in a cartoon on a handout of a long-shot Republican challenger, who today entered the office of one of two Hudson County Democratic Organization (HCDO) darlings in LD31 demanding answers and getting tossed in the process.
Max Pizarro, PolitickerNJ Read more

In Elizabeth, Street and Sign Wars Erupt in Hours Prior to Election Day
The two sides are clashing hard in Elizabeth, as the forces allied with Mayor Chris Bollwage and state Senator Ray Lesniak (D-20) zapped incumbent School Board Member Tony Monteiro over the weekend with an ethics complaint, while Monteiro’s allies say City Hall is improperly using its power to crack down on their efforts.
Max Pizarro, PolitickerNJ Read more

Secret Independent Influence on Elections at ‘Astounding’ Levels
There is no better illustration of the dominant role in elections undertaken by independent groups in New Jersey than this year’s Assembly contest.
Jeff Brindle, PolitickerNJ Read more

Newark council fuming after being left out of Obama visit
Members of the Municipal Council voiced anger and frustration after they were apparently left out of President Barack Obama’s visit to the city Monday.
Dan Ivers, NJ.com Read more

N.J. taxes second-worst in U.S.: Forbes
New Jerseyans already know it to be true, but a Forbes analysis of state-by-state tax burdens places the Garden State near the top of its “Worst States for Taxes” list.
Samantha Marcus, NJ.com Read more

District 11 Race Ranks High In Political Spending
“I just want to remind you that tomorrow is election day,” with hours to go before polls open, democratic assembly candidate, Joann Downey is making the push for votes in the 11th district.
Briana Vannozzi, NJTV News Read more

Christie’s clear stance on Social Security, Medicare draws non-partisan praise
As he tries to stand out in the crowded field of Republicans running for president, Governor Christie touts his plans to address looming shortfalls in Social Security and Medicare and the projected spike in costs for Medicaid.
Herb Jackson, The Record Read more

Analysis: Outside money may flood 2017 election
For Assembly elections on Tuesday that few New Jersey residents know about or are expected to vote in, special interest groups have so far spent at historic proportions.
Dustin Racioppi, The Record Read more

Former Wall Street Executive Stakes Out Gubernatorial Terrain
New Jersey voters will go to the polls tomorrow for an election that will determine the makeup of the state Assembly for the next two years. But in the hallways of the State House in Trenton, it’s a contest that is still more than a year and a half away that is starting to draw a lot of attention.
John Reitmeyer, NJSpotlight Read more 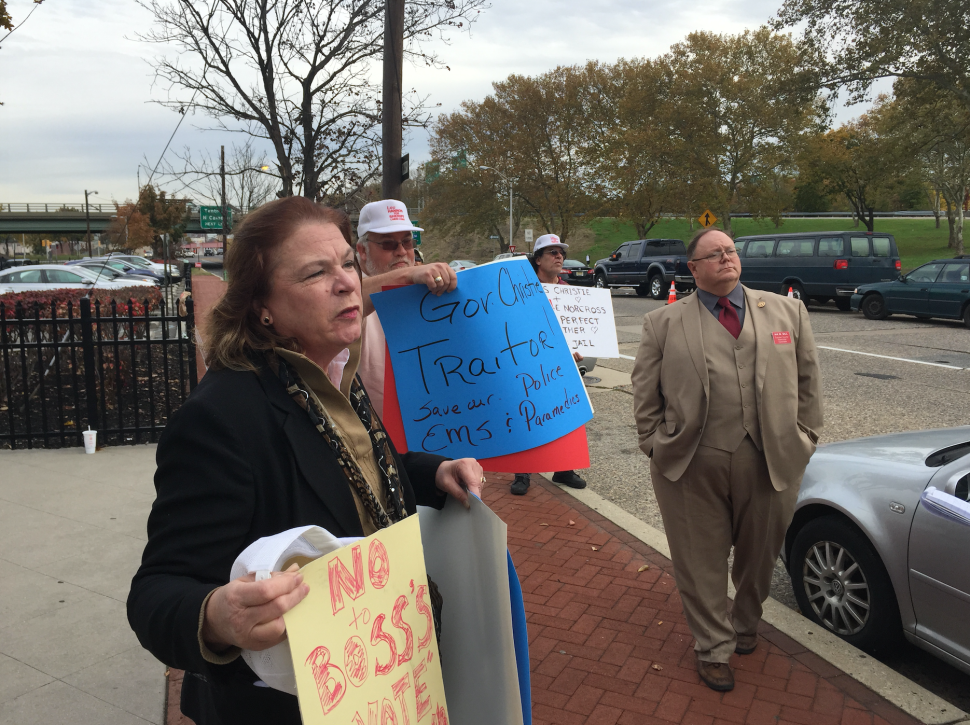