On October 31, President Bill Clinton stood before an estimated crowd of 100,000 in Tel Aviv to mark the 20th anniversary of the death of Israeli Prime Minister Yitzhak Rabin, who was murdered by an Israeli ultra-nationalist. Mr. Clinton was once again urging Israelis to take risks and make sacrifices for peace.

Unlike President Barack Obama, President Clinton’s support for Israel has never been in doubt. But Mr. Clinton has fallen into the traditional trap of envisioning the road to peace as a one-lane highway traveled by Israel alone, while the Palestinians sit on the shoulder creating an inter-generational culture of incitement and terror.

Mr. Clinton presided over the signing by Mr. Rabin and Palestinian leader Yasser Arafat of the 1993 Oslo Accords, an agreement that was to create the foundations for a just and lasting peace between the two sides. More important, no one did more than Clinton to help implement the accords. The hopes for Oslo, however, have evaporated over the years, and some would say predictably so.

Having fled Lebanon for Tunisia, Mr. Arafat used his base there to launch terror attacks on Israelis, eventually sustaining several retaliatory Israeli strikes on his headquarters. Safely ensconced thousands of miles from the front lines of the conflict, Mr. Arafat found himself becoming irrelevant.

In 1988, Mr. Arafat changed tactics, went to the UN and played the peace card. This led to a series of secret negotiations that culminated in the Oslo Accords and resulted in Mr. Arafat’s return to the West Bank from Tunisia, from which he had conducted terror attacks not only against Israelis, but also against Americans.

Months after signing the Oslo Accords, Mr. Arafat stood before a Muslim audience in South Africa and denounced the accords as no different from the agreement Mohammad, the prophet of Islam, made with the Quraysh tribe, an agreement that was made to be broken.

Mr. Arafat back-peddled his statements, but subsequent events would underscore that it was the most honest presentation he made about the Oslo Accords. At Camp David in 2000, Clinton worked tirelessly to bring Israeli Prime Minister Ehud Barak and Mr. Arafat to reach an agreement that would further advance the template set out in the Oslo Accords. Mr. Barak went far beyond his mandate, offering Mr. Arafat over 95 percent of what he had put on the negotiating table.

To the amazement of President Clinton and some of the other parties present, Mr. Arafat followed the time-honored Arab tradition and said no. A year later, Mr. Barak repeated the offer and Mr. Arafat again said no. In 2008, Israeli Prime Minister Ehud Olmert made an even better offer to Mr. Arafat’s successor, Mahmoud Abbas, eliciting the same result: no.

In every single instance, going as far back as the British Mandate of Palestine, whenever the Arabs were offered a state that shared a boundary with a Jewish state, they have had one response: no.

In Tel Aviv, at the commemoration of Mr. Rabin’s death, Mr. Clinton, who knows better, uttered the all too familiar mantra about the Israelis taking risks for peace, seemingly forgetting that the Israelis have taken risks for peace and have gotten neither peace nor recognition in the international community. Instead, they have gotten more terror, whether raining down from the skies of Gaza or from the perpetual culture of hatred and incitement that has led to the current intifada of the knives threatening innocent Israelis, even as Clinton spoke.

If Clinton wants to create a real movement for peace, he would go to Ramallah and exhort the Palestinians to give up the self-defeating culture of violence and terror and embrace the same momentum toward peace that 100,000 Israelis listening to Mr. Clinton in Tel Aviv embraced with their applause and adulation.

When 100,000 Palestinians stand shoulder to shoulder in Ramallah cheering peace, then peace will be something more than a figment of the imagination of Israelis and American diplomats. But as any observer of the conflict knows, it is easier to get 100,000 Palestinians to stand in the streets of Ramallah cheering for those who slaughter Jews for being Jews, than it is to get them to cheer for peace.

That is what has to change.

Abraham H. Miller is an emeritus professor of political science at the University of Cincinnati, and a senior fellow with the Salomon Center for American Jewish Thought. 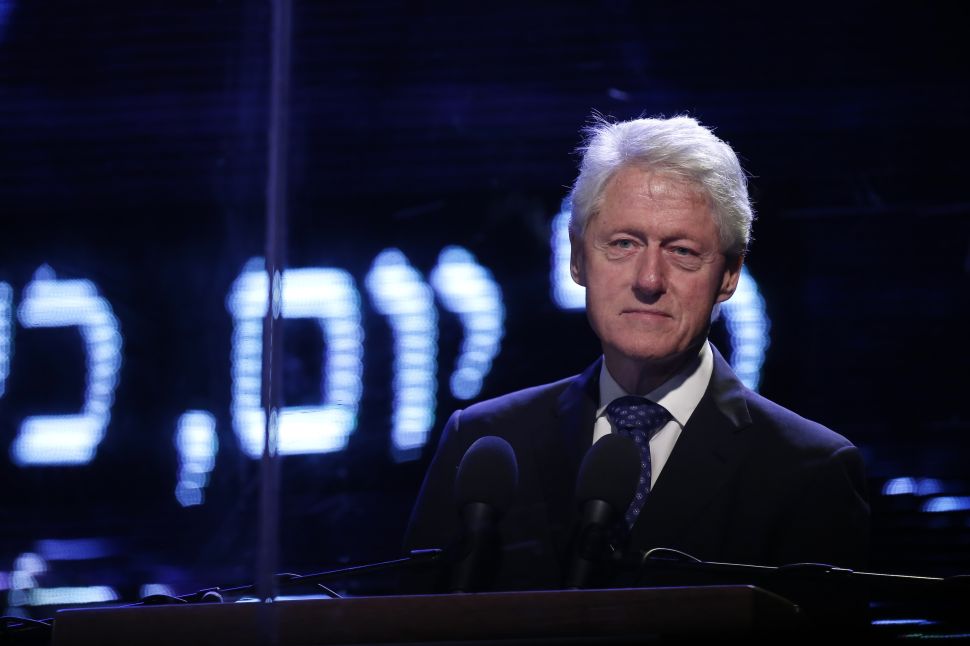