Last week, in the aftermath of the terrorist attack in Paris, Russian Foreign Minister Sergei Lavrov gave an extensive interview with Radio Russia.

With the voice of a chain smoker, Mr. Lavrov carefully curated his thoughts and limited his gestures, resorting to dry humor and sarcasm as he told the world where the Russian red-line-in-the-sand in Syria is—Russian ally Bashar al-Assad is to stay, no matter what they think in Washington or Brussels.

Not mentioning by name his U.S. counterpart John Kerry—who, in January 2014 called Assad “the single greatest magnet for terrorism that there is in the region”—Mr. Lavrov, not without well hidden sarcasm, said that “if we are to follow this logic, it turns out that Assad is not the only magnet for ISIL. Lebanon, Turkey, France and Egypt became magnets for ISIL. And if we are to recall that both France and Turkey have always insisted on the immediate departure of Assad from power, then the ‘Take Assad out and everything will calm down’ logic disappears completely, because ISIL reaches its goals of creating the Caliphate with no regards to what is going on in Syria, with no regards to what and who and how feels about Assad.”

‘Assad represents the interests of a significant majority of Syrian society, and a peaceful solution without him is not going to take place.’

According to the gross master diplomat, Russia’s “Western partners” have realized by now the futility of their attitude that “if Assad goes, all problems will be resolved.”

“The West has said that without Assad’s departure from power the suffering of the Syrian people would only increase. Before that, they [the West and especially the U.S. President] insisted his days were numbered. These days have been numbered for the fifth year in a row. None of the predictions put forward by our Western colleagues—that the people would rise and overthrow him—have materialized. This means one thing—that Assad represents the interests of a significant majority of Syrian society, and a peaceful solution without him is not going to take place.”

The terrorists, according to Mr. Lavrov, were encouraged to come to Syria by outside forces so they could make regime changes happen in the country.

‘Everybody understands that this threat—like a genie out of the bottle—is not going to be pushed back inside.’

“When our Western colleagues and their friends in the region turned away, a huge number of terrorists, extremists and foreign fighters came into the country to solve the problem of overthrowing the regime [in Syria]. At some point in time those who encouraged such a process—as in similar cases in the past—lost control over the situation, and the terrorist instincts of these foreign fighters prevailed. They realized they had a chance to materialize the idea of a so-called ‘Islamic State’ the one that was invented in the middle of the last decade by the guys that Americans released from prisons in Iraq and Afghanistan. And so the process was out of the control of foreign governments and became a self-perpetuating movement. Huge territories have been captured, oil fields have been seized [by ISIL]… and by now, most likely everybody understands that this threat—like a genie out of the bottle—is not going to be pushed back inside.”

“We asked the Americans: ‘Do you want to overthrow Assad and to give Syria into the hands of the terrorists?’ They said, ‘No, not at all, but the solution must be found here that both Assad leaves and terrorists do not come to power.'”

“Terrorist groups do not argue with each other like the West and Russia do,” continued Mr. Lavrov. “They can negotiate things smoothly—’Jabhat al-Nusra’ with ISIL. I am sure they can find agreement with other branches of Al-Qaeda. Our intelligence shows they can. And facing such a colossal and unprecedented threat, as they say in Russian, “to be a coquette” a “skirt-wearing woman” —to put forward preconditions such as regime change in this country or the other, with the goal to consolidate our actions in the fight against terror—is now simply inexcusable.”

‘In the epoch of globalization, in the epoch of mutual dependence, if the U.S. pulls the Iron Curtain down they might pinch something.’

To Mr. Lavrov, fighting both ISIL and Assad at the same time is inconceivable.

“Our Western partners say that when the problem with Assad is resolved, we will organize the coalition to take down ISIL. But then doesn’t it become clear if that Assad is against ISIL, it is necessary to take him out to fight ISIL? Or is ISIL against Assad? And if it is so, by weakening Assad, we play into ISIL. Even John Kerry tells me all the time—and recently repeated it publicly—when there’s no more Assad there will be an effective coalition… But I think that everybody is starting to understand the necessity of more pragmatic approach.”

Such approach means leaving the question of Bashar al-Assad staying in power off the table until ISIL is destroyed in Syria by the (legal) Russian military and (illegal but nonetheless welcomed) Western coalition forces, continued Mr. Lavrov.

He expressed his belief that soon his government’s approach to Assad is going to be shared by the world. The most important thing is what is happening, not what the politicians are saying, said Mr. Lavrov.

He does not think Russia has been isolated politically on the world stage or is facing a new Iron Curtain caused by her actions or policies in Syria, Ukraine or any other part of the world. Mr. Lavrov revealed, “Nobody asks Russian diplomats about Crimea anymore—not our American, German or French partners in the smallest countries of Europe.”

“In the epoch of globalization, in the epoch of mutual dependence, if the U.S. pulls the Iron Curtain down they might inadvertently pinch something to themselves.” He concluded the interview with a smirk. 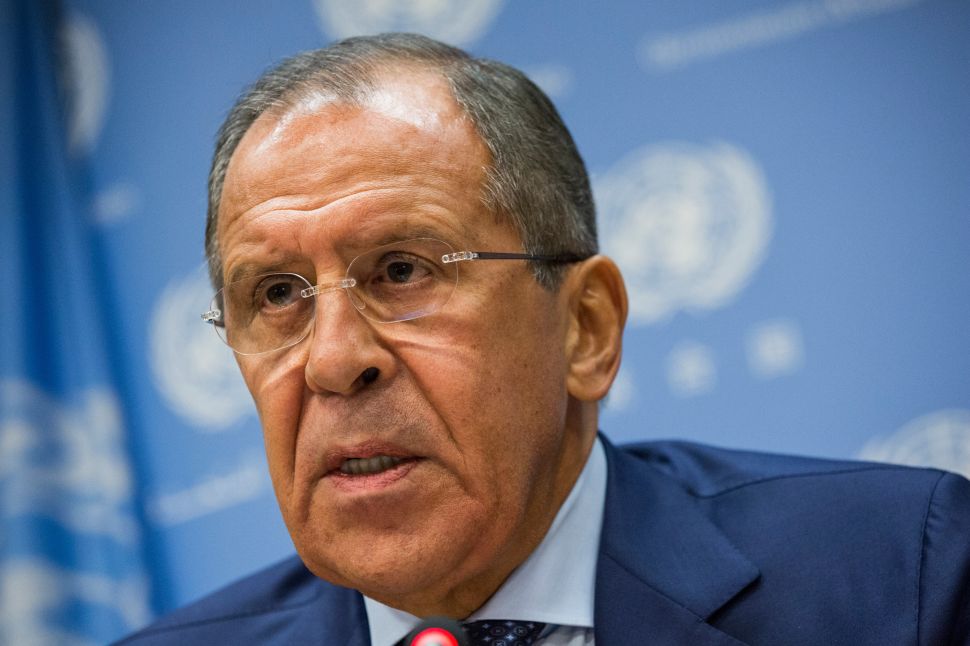