This Week in Olivia’s bloody coat pockets, Susan Ross is full on in love with David Rosen, Jake and Huck disagree about their “guys,” and all Fitz wants to do is cuddle.

In retrospect, very little happened in this week’s episode. That should make you afraid. Very afraid. Shonda Rhimes is nothing if not consistent and knowing her patterns, she’s saving all the goods for next week (the last episode before the hiatus) in order to leave us yearning for more throughout the holidays. For now, she has chosen to appease us commoners with a mostly unnecessary nonlinear timeline. Let’s get into it.

We begin with Olivia in handcuffs and lightly tousled hair, looking less than thrilled about being detained. Fitz enters her cell and asks some obvious questions. Cue: 48 HOURS EARLIER. Olivia and Fitz are at a dinner for a Middle Eastern diplomat (a bone-chillingly fine diplomat) who speaks Farsi and uses a translator, Navid. The dinner is supposed to help sway the Middle Eastern visitors to sign a treaty, but really just serves as an opportunity for the diplomat to low-key flirt with Liv right in front of Fitz. Navid pulls Olivia aside after the diplomat is distracted and he begs her for help. He has information about a secret nuclear facility and he will exchange its location for asylum. Olivia, too busy looking like God herself in a sequined shouldered gown and a smoky eye, considers the agreement. The next morning, Olivia, Cyrus, and Fitz are having their usual morning check-in (during which Olivia, current Leader of the Free world, gives her commands for the day and applies her lip gloss) when Olivia shares that her gut tells her Navid is telling the truth. Her gut, as you may recall from the pilot of Scandal, is “never wrong”, except for the countless times that she has been dead wrong and lives have been lost as result. But I digress. This time she has a feeling, and since Fitz is her adorable puppy, he immediately orders Cyrus to find a way to stall the treaty while OPA investigates the case. After Liv heads back to OPA, Cyrus expresses an interest in investigating the Rowan-magically-out-of-jail situation, possibly with the help of the CIA. Fitz wants no part in it and says he has it being “handled”, which really means Olivia is going to figure it out for him while he writes “Mr. Grant-Pope” over and over again in a journal somewhere.

On her way to handle the Navid case, Olivia is summoned to see Rowan, who is sporting an impressive wool coat and a genuine look of fear in his eyes. Someone is hunting him and, for the very first time, he is terrified that he could be ended for good. “My sons have turned against me,” he tells her, betrayed, with the despair and conviction of Jesus on the cross. He leaves Olivia with a sorrowful farewell, and the reassurance that she is indeed his greatest achievement. As she heads back to her office, Olivia is visibly shaken. At OPA, the team is trying to verify if Navid would be privy to the type of classified information he claims to have been. They rationalize that he probably would, since he mostly translates for the same diplomats and they keep him under lock and key when he is not at work as to not spill their secrets. He gives a location deep in the desert and when Huck looks it up on Google Images, it’s a soda factory. All of OPA immediately jumps to conclusions, Catfish style, and accuses him of lying. He’s not lying, which Olivia should know because of her handy dandy gut, but she second guesses herself.

Somewhere across town, Huck and Jake are having a conversation about the Rowan situation. Huck is concerning Jake’s “guy” is loose, and while normally in popular culture one’s “guy” would undisputedly refer to their penis, in this situation, it refers to their inner, uncontrollable desire to end human lives.  Jake argues that his “guy” is in check, but he also sees a “roach” and desires to stomp on it. Huck claims to be out of the murda game for real this time, and heads back to OPA. After a quick glance at the Google Image evidence, the team is able to deduce that Navid is in fact telling the truth about the soda factory, and Olivia dashes to find Navid and admit her mistake. Its too late, however, since he has attempted suicide in order to escape returning to his home country. Olivia finds him unconscious and gets blood all over her super cute plaid blazer, but he lives so it was definitely worth it. Olivia figures from the fact that he has no emergency contact that he is gay, which was basically a wild. Gay people are criminalized in his country, which is the real reason why he wanted asylum. Olivia grants it to him directly, since she has that ability now. She’s President, remember?

On her way back from her victory, the FBI accosts Olivia. Turns out Cyrus was able to find proof that Olivia was key in freeing Rowan from jail, and she is arrested. We’re now back at the beginning of the episode, with Olivia and Fitz in her cell and Fitz’ lower lip quiver slowly progressing from a level 4 to a level 7. Fitz takes her handcuffs off as he explains that he knows the charges aren’t true, they can’t be, because she wouldn’t do this. She, who stole an election because Fitz was putting it down on her. She, who has yet to report her terrorist mother to the proper authorities. Yes, of course, she is incapable. She rolls her eyes and fesses up, and for a moment, it looks as if Fitz’ heart has broken for good. However, later in The Oval, Fitz demands Cyrus to drop all of Olivia’s charges. He says she told him about Lazarus One, the other Devil after Rowan, and when Cyrus asks whether or not he believes her, all he does is smile. Olivia is out immediately; washing her unrealistically healthy natural curls while Fitz waits for her. When she finishes, she watches as all of her personal belongings (white hats and all) are being loaded into an apartment-sized closet just for her. Fitz informs her that he had all her stuff brought over to her new home, The White House. He kisses her while she looks terrified, like Kim’s face on Keeping up with the Kardashians when Kris Humphries suggested shipping his stuff to her condo. Olivia is not ready for this type of commitment, but Fitz, like Kris, has other plans.

At the end of the episode we see Rowan, predictably in handcuffs as he could only hide for so long. However, its not Jake who has him in captivity, but its….HUCK! Gasp! Look whose guy is loose after all!

And finally, some parting thoughts as we head into next week’s midseason finale:

Join me next week for a classic Huck torture session and some more poorly executed plotting from Fitz! 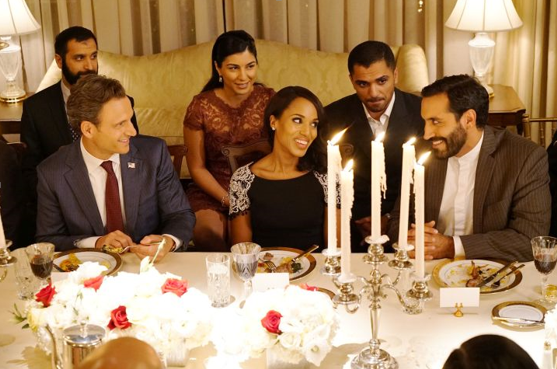