I don’t want to say this was a waste of an episode. I don’t! And really, this week’s episode of Scream Queens wasn’t a waste. It showed me exactly how many logic gaps one single episode of television could contain. And Ryan Murphy, boy did you surpass yourself. This has more logic flaws than The Dark Knight Rises (come on now, how did Batman leave his Middle Eastern well-prison without a passport? And get into a sealed Gotham?) But I digress.

Episode seven, “Beware of Young Girls,” may very well just have been a warning to any and all young girls: watch out, because chances are, you will get murdered. This theme traces through the episode’s two main stories.

The episode kicks off with Chanel #2’s eulogy. Her embalmers appear to have done an excellent job, as although Chanel #2 has been dead and rotting for several weeks, her eyebrows look terrific. Chanel delivers Chanel #2’s eulogy, a speech so offensive to all of my senses that I dare not quote it here. Suffice to say, Chanel claims that Chanel #2 deserved to die, was a bad friend and I believe she’s called a “whore” a couple times. I swear, Scream Queens is just trying to avoid likable characters at this point.

After the funeral, the Chanels try to communicate with Chanel #2 via Ouija board, in hopes they might discover who the killer is. Instead, Chanel #2’s spirit tells the girls that Chad is cheating on Chanel. I’m no expert, but I feel as though spirit–human meetings are rare, and I can’t quite wrap my head around using a brief moment of connection to tell Chanel that her boyfriend is cheating on her. Which everyone knew anyway. In fact, I’m pretty sure that was one of the grievances Chanel listed during her eulogy.

Later, when the sisters revisit the Ouija board, Chanel #2 claims that Chanel is the killer—causing the other Chanels to panic, and plan to murder Chanel themselves. Chanel #2 appears to Chanel as a ghost, warning her of the plans of her demise in an attempt to make amends. To be fair, she only does so as an attempt to make it to heaven—she’s tired of “getting motor-boated by Adolf Hitler.” I just…who writes this? I hate that I had to type that. No one should ever type that.

In a slightly less repulsive plotline, we finally get the backstory of Dean Munsch’s husband. What’s that? You didn’t care? Oh, and it’s not relevant to the plot line? At all? How funny. Well, since no one asked, here it is. Dean Munsch’s husband, Dr. Munsch (Philip Casnoff), fell in love with student Feather (Tavi Gevinson), a KKT sister. Gigi (during one of the more awkward daughter–dad’s girlfriend bonding moments I’ve seen) recommends Pete and Grace ask Feather for more information about Dean Munsch.

After talking to Pete and Grace, Feather arrives home to find her lover Dr. Munsch decapitated. It’s unpleasant for everyone. Dean Munsch is imprisoned in a mental institution; however, a bologna sandwich (yes, really) turns out to be her saving grace, as the DNA on the sandwich matches the DNA on Feather’s toothbrush.

In a completely unsurprising turn of events, the Dean was, in fact, guilty of the murder. In her infinite wisdom, she decided to capitalize on the flurry of murders to commit one more. What, you may ask, does this have to do with discovering who the Red Devil is? The answer, of course, is nothing.

I can’t quite make up my mind as to whether this episode was a filler, or whether they felt bad for the writer of the script and decided to make it—to give him a little confidence boost. Either way, I’m not impressed. Here’s to my (withering) hopes that Scream Queens next week’s episode is stronger—or at least more relevant. 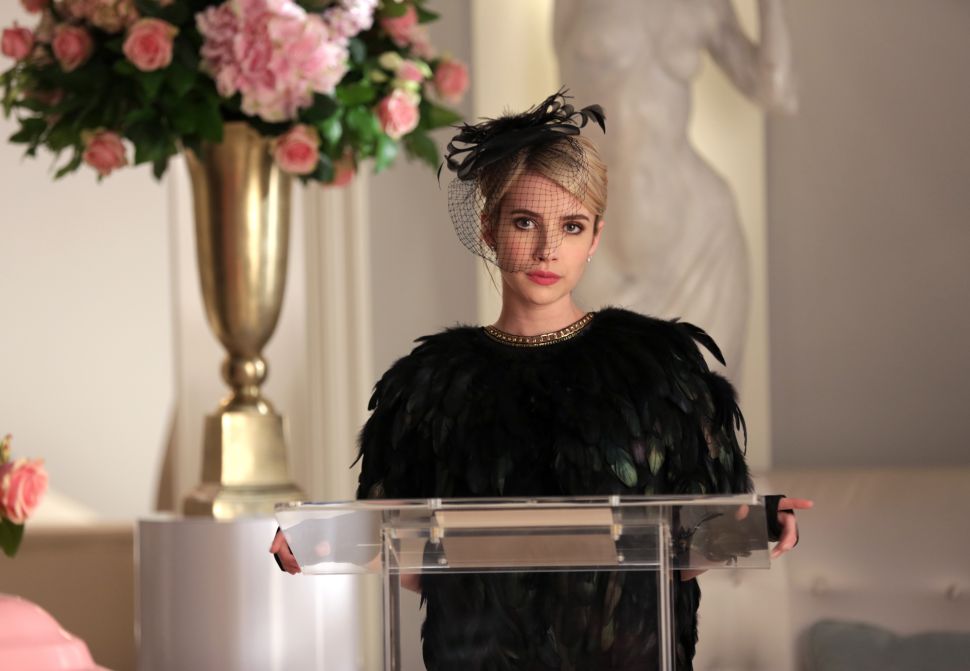