Good news! I found a plot! A real–life, actual plot! There might be hope! I think exclaiming “there might be hope!” in the middle of a show recap might be a little like yelling “fire!” in a movie theater: it causes so much unnecessary excitement and bustle, and can be disappointing (especially to all of the arsonists out there).

Speaking of arsonists, guess what Wes is? That’s right, Grace’s father is an arsonist. (Side note, I could not be prouder of my introduction and transition into arson. My English degree is doing wonders.)

But I digress. This episode revealed some major plot lines—namely, we finally discover who Grace’s mom is. Remember the Kappa president who was strangely obsessed with TLC’s “Waterfalls” in the pilot episode? Well, it’s her. The night the bathtub baby was born and its mother died was also the night Grace’s mother met her father. Dare I say, this show gets more romantic by the episode.

You might be wondering, “where is the arson! Orly, you promised me arson!” Well, Grace’s mother didn’t take to the death of her sorority sister and her accessory in murder lightly. She quickly disintegrated into alcoholism, theft, and meth dealing (the last one was a bit much Ryan Murphy, leave the methamphetamines to Vince Gilligan). She eventually died in a drunken car crash, leaving Wes to pick up the pieces. Or, in his case, set fire to his entire house, in hopes of destroying any evidence Grace might have of her mother. “I was protecting you!” he growls. “I committed arson for you!” There it is. That’s my favorite line of any show. Ever.

As Grace storms out, Gigi calmly enters, suggesting that perhaps the strain of college and you know, serial killers, has been too much for Grace’s fragile disposition. Maybe, Gigi notes, Wes should commit her to a mental hospital.

At the very least, Wes could trust Gigi’s intuition: after all, she too spent time in a mental hospital. Grace and Pete visit the institution that housed Dean Munsch last episode, remembering a patient that painted everyone who entered the hospital. Sure enough, they find a painting of a young Gigi, cradling two infants. Perhaps there’s more than one bathtub baby? I hypothesize the two babies are Pete and Boone—they gel their hair so similarly!

The news of Grace’s mom, what truly causes Grace to unravel, comes from Chanel, who has detectives dig into Grace’s past when Chanel suspects her of being the killer. Chanel also tries to accuse Zayday of being the murderer, but lacks the evidence. However, just as soon as Jennifer (that one pledge who’s obsessed with candles) insults Zayday does she turn up dead, at the hands of the Red Devil.  Coincidence? Maybe. Probably not. Who knows. All I know is when Jennifer’s body is discovered, it’s covered quite artfully in melted wax. I don’t condone murder, but I do appreciate someone who takes pride in their craft.

However, that wasn’t the only Red Devil appearance. The episode begins with an attack on Dean Munsch, who handily takes on three attackers. Two are dressed as the Red Devil, but one takes on a more political approach by dressing as Supreme Court justice Antonin Scalia. When Boone is shown suddenly to us as a gym rat, sporting a fake beard (“I think that’s Joaquin Phoenix!” says one excited bystander), he reveals that he is one Red Devil. Gigi sported the Scalia mask, leaving one Red Devil to piece together.

So yes, we’ve got two out of the three killers. But we certainly don’t have a motive, and we don’t have an explanation for why Abigail Breslin can’t deliver her lines without an intense amount of vocal fry. These are the questions. 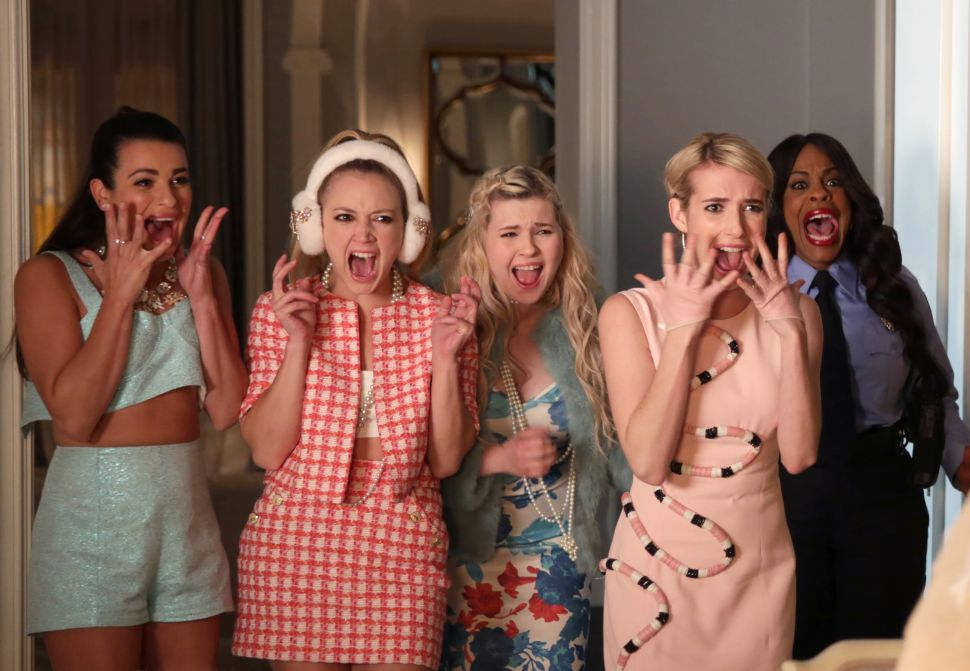