There are countless reasons why Senator Bernie Sanders is a superior presidential candidate to his rival, Hillary Clinton. The second Democratic debate further highlighted this.

Ms. Clinton’s biggest gaffe of the night was a nonsensical tangent about 9/11 and her female donors, when confronted on her ties to Wall Street. Her divergent tactics were poorly executed and embarrassing for the Democratic Party as a whole. Some of the biggest donors to the Clinton Foundation include the largest banks in the country, such as Citigroup, Bank of America, and Goldman Sachs. Despite both Mr. Sanders and Ms. Clinton spending the majority of their careers in public service, only Ms. Clinton has used it to make several million dollars for herself, and she has done this, in part, through political favors to large banks and corporations.

Her ties to Wall Street were further exhibited in an interview between Senator Elizabeth Warren (D-MA) and Bill Moyers in 2004. Ms. Warren explained how, in the 1990s, Ms. Clinton influenced her husband, Bill Clinton, to veto a bankruptcy bill that favored creditors over consumers—later to vote in favor of it herself when she became a U.S. Senator.

Hillary Clinton’s corruption isn’t limited to Wall Street. The Chair of the DNC, Debbie Wasserman Schultz, was also Co-Chair of Ms. Clinton’s 2008 campaign. Ms. Wasserman Schultz strategically limited and scheduled the debates to protect Hillary Clinton as Barack Obama defeated her through confronting Ms. Clinton on her inconsistent political record. Still it continues, as the second Democratic debate of the 2016 election cycle was the only one to take place in Iowa, and was scheduled on a Saturday night when the Iowa Hawkeyes—who have been undefeated this football season—played nationally ranked Minnesota.

Voters become disenchanted with the political system because of people like Hillary Clinton. Her complaint to Mr. Sanders during the debate—in response to discussing the corrupt role money plays in politics—that he was trying to “impugn her integrity,” might be true if she had any integrity to impugn. As Mr. Obama pointed out in his 2008 campaign against her, Ms. Clinton flips frequently on issues to whatever stance wins her greater political favor. There is no case in which she has changed her mind or stood her resolve on a controversial issue based on principles like Mr. Sanders did in his opposition to the Iraq War, despite nearly unanimous favoritism by congress and the public at the time. Ms. Clinton admitted making a mistake in voting for the Iraq War, but the American public cannot afford another mistake like that from future presidential administrations.

‘While there are some differences in financial policy between Ms. Clinton and Mr. Sanders, as a practical matter they’re trivial.’

Lies and exaggerations were a significant part of Ms. Clinton’s rhetoric during the second Democratic debate. She touted that the majority of her donors, 60 percent, were women. She failed to mention her opponent, Senator Bernie Sanders outnumbers her in overall small donor contributions, including from women. Ms. Clinton lied again when she said, “I have hundreds of thousands of donors, most of them small.” Only 17 percent of her donors give contributions of $200 or less, compared to 74 percent for Mr. Sanders.

While debating minimum wage and economic policy, Ms. Clinton bragged about Princeton economist Alan Krueger supporting her minimum wage proposal of raising it to $12 an hour, yet in a New York Times op-ed, Nobel Prize winning economist Paul Krugman acknowledged it doesn’t matter as long as a Democrat wins the presidency. “If a Democrat does win, does it matter which one it is? Probably not. Any Democrat is likely to retain the financial reforms of 2010, and seek to stiffen them where possible,” he said. “In other words, while there are some differences in financial policy between Ms. Clinton and Mr. Sanders, as a practical matter they’re trivial.”

What Ms. Clinton also failed to mention is Bill Clinton’s former Secretary of Labor, Robert Reich, is a strong supporter of Mr. Sanders over her, including on economic policies. In an interview with Democracy Now, Mr. Reich described Ms. Clinton’s economic policies as “a step in the right direction, but not far enough.” Mr. Reich also explained Mr. Sanders is right to support re-establishing Glass-Steagall, and has come to the Democratic Candidate’s defense when The Wall Street Journal and The Washington Post published articles criticizing his policies. Like Mr. Sanders, Mr. Reich also supports raising the minimum wage to $15 an hour, as does New York Governor Andrew Cuomo, and several other Democrats.

It is unfortunate that, because of Hillary Clinton’s influence on the Democratic Party—who have treated her as not only the front runner, but as their nominee throughout the campaign—Bernie Sanders faces an uphill battle. Not only must he convince voters to support him, but he also faces a strong Democratic establishment geared toward his defeat because of his integrity in favoring principles and what is best for the American public over party politics and what unifies Democrats. 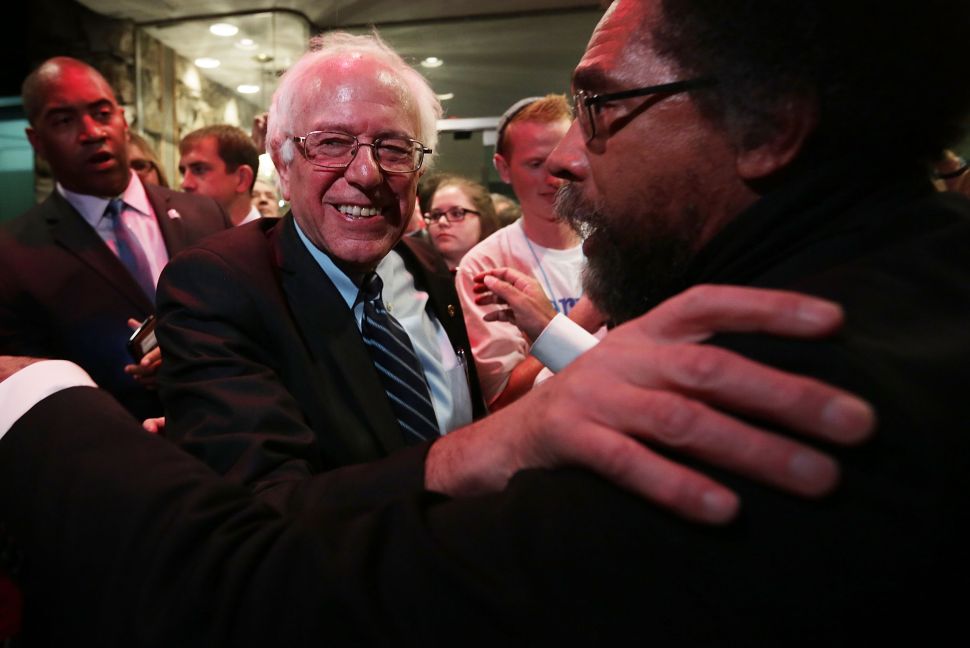