Don your diamonds and open your checkbooks. This Thursday, the Salon of Art + Design returns to the Park Avenue Armory for its fourth year, with 55 exhibitors, many of them showcasing full-scale period rooms and six-figure wares.

What makes this art fair different from so many others the city hosts is a global inventory of goods spanning decades (the accent is on French) and a wily and weird mix of fine art, designer furniture, glass and ceramics.

Jill Bokor, executive director of the show told the Observer. “It’s inspiring to see the new paired with the most classic vintage pieces—it helps us break out of old ways of thinking and keeps us fresh.”

So what’s everybody bringing to the fair, which runs Nov. 12-16 at 643 Park Avenue? Here’s some highlights:

Following on the heels of Sotheby’s and Christie’s explosive sales of Italian art in London last month, Robilant + Voena, which hails from the English capital, presents several Lucio Fontana 1960s canvases. The dynamic Concetto spaziale, Attese, which is baby blue with four rhythmic slashes, was painted in 1967, the year after Mr. Fontana was awarded the First Prize for painting at the Venice Biennale.

Richard Nagy Ltd., also of London, offers a strong selection of drawings of women by Gustav Klimt, Egon Schiele and Alfred Kubin. Mr. Klimt’s Seated Semi Nude with Spread Legs, a colored pencil drawing on paper from 1909, is powerful in its jovial nature and simple rendering, while Mr. Schiele’s Woman Hiding her Face from 1912 is raw and direct in its portrayal of a reclining femme fatale. The gallery specializes in Austrian and German Expressionist works.

Another gem of a gallery, this one with modernist furniture from the 1960s and ‘70s, is New York’s Demisch Danant,  which has something very special planned: their elaborate booth re-creates a Paris apartment of the 1970s.

“The Salon is a perfect venue for ’27 Rue de Grenelle,’ our latest exhibition in our ongoing series devoted to postwar French design of the pioneering figures of the 1960s and 1970s at the fair, Suzanne Demisch shared with the Observer.

Friedman Benda from New York presents “Artisanal,” a living room installation of furniture designs by Brazil’s fabulous Campana Brothers (at about $18,000 and up). This solo booth features their Bolotas Armchair, an amusing accumulation of big sheep’s wool pillows on a steel armature with exotic wood legs,and Ofidia Side Table, a snaking arrangement of rope that was later cast in bronze.

“As eclectic and ubiquitous as the Campana Brothers are, it is rare to see such a focused display,” Marc Benda told the Observer. “Their work has matured since we exhibited prototypes and works-in-progress in the “Concepts” show at the gallery in 2013. We wanted to show the results to a large, concentrated audience such as at the Salon.”

“We have found that the global collector really loves and responds to unique handmade objects,” Zesty Meyers, co-founder of R & Company, said to the Observer.

Berlin’s Galerie Ulrich Fiedler, a specialist in vintage modernist furniture, has a show of tubular steel tables and chairs from the 1920s and ‘30s by Marcel Breuer, Le Corbusier, Hans Luckhardt and Mies van der Rohe. Mr. Breuer was the first designer to employ tubular steel when he was still a student at the Bauhaus and the gallery has one of his initial designs—a set of four nesting tables with tubular steel legs and lacquered plywood tops.

Seomi International, which has spaces in Los Angeles and Seoul, offers a new bentwood chair made with walnut by Bae Se Hwa, a futuristic metal bench by Jim Sang Hoonthat’s titled Phenonema 2015-001 and the new “Bada” series of quirky tabletop sculptures by Lee Hun Chung, who also makes ceramic furniture that has been exhibited worldwide.

London and Paris’ Carpenters Workshop Gallery, which just opened a branch in New York in the penthouse of the Takashimaya Building on Fifth Avenue, presents an overview of the young furniture and lighting designers it represents. Sebastian Brajkovic’ s Fibonacci chair, a lounge chair that morphs from the classical to the eccentric, is as sculptural as it’s functional.

That’s our picks, but yours may be different. And there are six new galleries this year, beefing up the categories of mid-century Italian, 60’s and 70’s French, and modern European ceramics.

When we asked Ms. Boker what she was most excited to see, she said, “That’s pretty hard considering all the treasures coming our way.  I would have to say that I’m looking forward to seeing the one-man exhibition of Henry van de Velde at Yves Macaux, new work by Niamh Barry at Todd Merrill and the luminous Ak Ikat weavings in fiber optics and yarn at Maria Wettergren.”

Finally, on view at Galerie Berès, there’s a little ostrich by Giacometti—it’s blue chip, whimsical, and appealing—much, we hope, like the Salon itself. 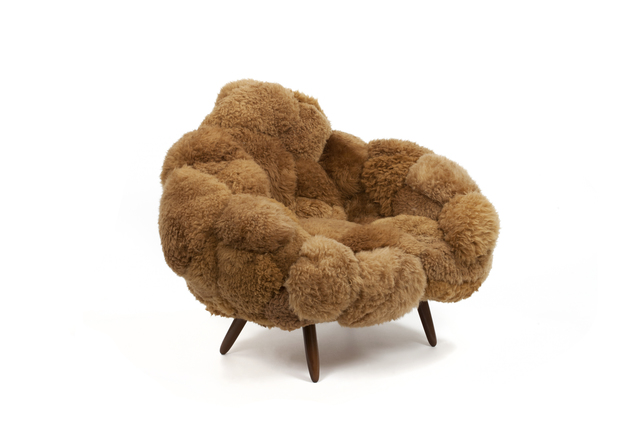