Ex-Assembly Speaker Sheldon Silver—who for decades was one of the most powerful men in the state—was found guilty on all counts at the conclusion of a corruption trial in a Manhattan federal courthouse this afternoon.

“Today, Sheldon Silver got justice, and at long last, so did the people of New York,” U.S. Attorney Preet Bharara said in a statement—using just 16 words to sum up a high-profile case that has rocked New York State politics.

Mr. Bharara had Mr. Silver arrested in January on charges of extortion and several kinds of fraud. The hard-charging prosecutor asserted that the Lower Manhattan Democrat had “monetized” his powerful perch in Albany by using it to pressure organizations with business before the state to make use of two law firms that paid the legislative leader more than $4 million in referral fees.

Mr. Silver, 71, a Democrat, led the Assembly for decades—and, after he’d quashed attempts to unseat him, most politicos assumed he would lead the chamber for years to come. The powerful position meant Mr. Silver was one of Albany’s “three men in a room”—along with the governor and the senate leader—who set the state budget and hammer out deals behind closed doors.

The charges against Mr. Silver upended the status quo in Albany, and were followed in short order by the indictment of another one of the room’s three men, former Senate Leader Dean Skelos. Mr. Skelos, a Republican, is on trial just across the street from the courthouse where Mr. Silver has sat for the last few weeks, also brought up on corruption charges by Mr. Bharara. The dual trials have had a tremendous impact on the workings of Albany, casting a pall over the idea of business-as-usual in the capital—which is what Mr. Silver’s lawyers have maintained was going on, despite prosecutor’s insistence the conduct was illegal— and slowing down negotiations over the budget late last year. The proceedings have also included plenty of testimony about the third man in the room, Gov. Andrew Cuomo.

The trial was expected to last up to six weeks but instead wrapped up in just over three weeks, heading to the jury early last week before a break for a long Thanksgiving weekend. The deliberations, which lasted for three days, were marked with drama—one juror begged on the first day of deliberations to be removed, and today another revealed they had discovered a potential conflict of interest only this weekend.

Prosecutors had charged Mr. Silver with two distinct schemes. In one, he was alleged to have funneled public money into the Mesothelioma Center at Columbia Presbyterian Hospital, after the director of the center at the time had requested that the speaker’s law firm Weitz & Luxenberg donate to the facility. No donation from the firm was forthcoming, according to former director Dr. Robert Taub, but state financing was—and the cancer researcher testified that he referred patients to Weitz & Luxenberg while getting the money, a favor he otherwise reserved for attorneys who had contributed directly.

The former Assembly leader was also accused of, in a separate scheme, leaning on two developers seeking lucrative tax breaks from the state, purportedly urging them to employ his friend and former counsel Jay Goldberg as their tax attorney. Mr. Goldberg then shared the resulting fees with Mr. Silver, even though the politician was not an employee of his firm.

Lobbyists for one of the developers, Glenwood Management, testified about the efforts both Mr. Silver and their company made in order to hide the dealings—which they stated made them and their boss, Leonard Litwin, “uncomfortable.”

The Justice Department alleged that the speaker disguised the spoils of the arrangements as legitimate income from legal work, and sank them into investments in Albany-run projects upstate. In the process, he used the U.S. postal service and other lines of communication, leading to charges of mail and wire fraud.

Mr. Silver had pleaded not guilty, and his lawyers repeatedly sought to get the charges thrown out, without success. The defense had sought to undermine Dr. Taub’s testimony by pointing out he has a non-prosecution agreement, and had argued none of the speaker’s activities actually constituted a criminal quid quo pro, or direct “this for that.”

Mr. Silver’s arrest resulted in him stepping down as speaker, allowing for Carl Heastie to ascend to the position. Menawhile, Long Island State Senator John Flanagan succeeded Mr. Skelos as the head of the State Senate. Mr. Silver had remained an assemblyman but, following his conviction, will be expelled from the legislative body.

Mr. Silver faces up to 130 years in prison on the seven counts. Judge Valerie Caproni will set a date for his sentencing. 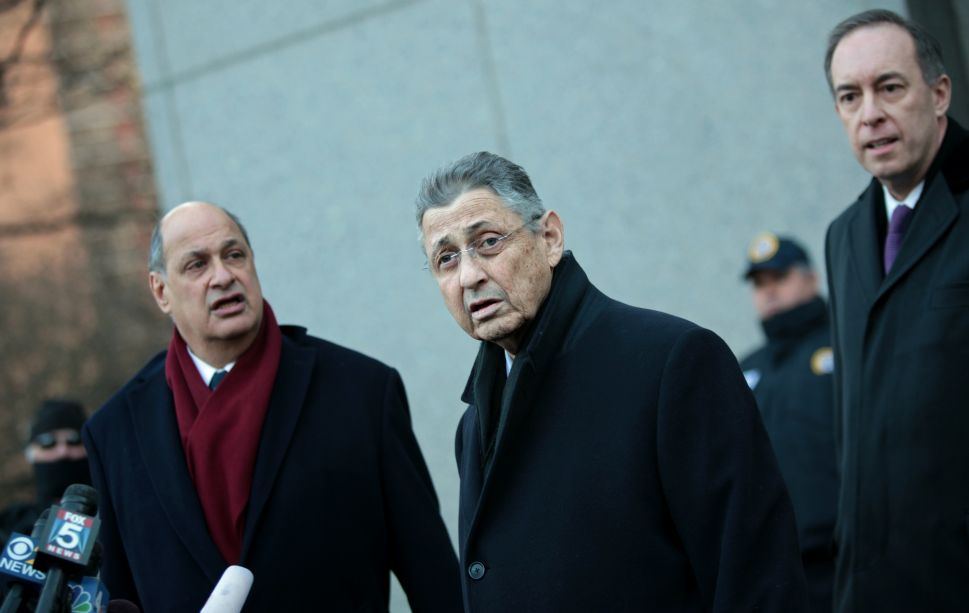