ATLANTIC CITY – Under the leadership of Bergen County Democratic Chairman Lou Stellato, Democrats in New Jersey’s most populous county had an all but sweep this Election Day—the freeholders kept their majority and Democrats decisively won in the supposedly competitive LD38. Today, Stellato packed the Borgata’s Izakaya restaurant, demonstrating his ever-strengthening position as a leader in the state’s Democratic party.

Among the guests was Jersey City Mayor Steve Fulop, a Democrat and likely gubernatorial candidate in 2017. According to Fulop, the connection between Hudson and Bergen—as well as with Passiac and Essex Counties—is strong and important when looking to the state’s future.

“The work they are doing in Bergen County is unprecedented and Chairman Stellato has done a fantastic job of taking a party that clearly had some challenges and making a strong statement in the largest county. It is strongly blue now,” Fulop said. “Hudson, Bergen, Passaic and Essex continue to have a great relationship and we support each other.”

While Fulop would not confirm his much-speculated 2017 gubernatorial ambitions, he underscored the connection between the two counties as being critical. He continued: “The relationship between Hudson and Bergen is tremendously important. There has been overlap on state senators there has been overlap on congressional districts. There are a lot of people from Hudson County who have moved to Bergen County so there is a lot of shared history there. Those are strong bonds.”

Stellato—who said that the 2017 gubernatorial contest is “three lifetimes” away and that he had no allegiances thus far—agreed that the multi-county connection is important.

“We made a quad-county alliance between Hudson, Bergen, Passaic and Essex,” Stellato said. “The problems and the struggles of the people in those counties are very similar.”

Fulop and two other likely Democratic gubernatorial candidates Former Ambassador Murphy and Senate President Steve Sweeney have all been making the rounds in Bergen lately as they strengthen ties ahead of 2017. Murphy also attended Stellato’s event today.

Though Election Day was just two weeks ago, it seems that Stellato could play a critical roll in helping the eventual Democratic candidate for governor in Bergen in 2017. 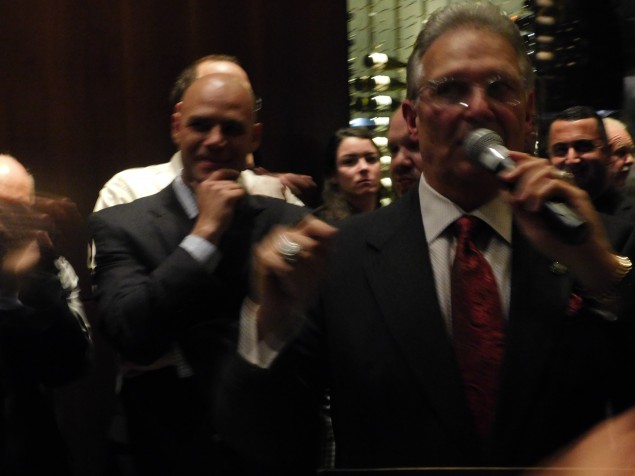