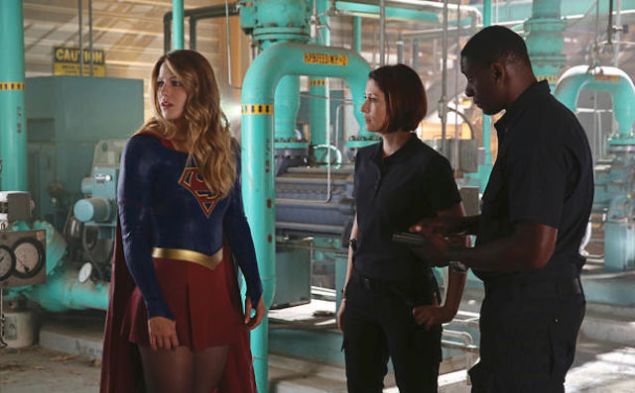 The MVP of “Stronger Together,” who I kind of suspect will be the MVP of the entire series, is Cat Grant. Seriously, I would watch an entire hour each week of Calista Flockhart doing her best Devil Wears Prada impression while occasionally dropping feminist truthbombs on everyone. She is just great. And I don’t really think her character is portrayed particularly realistically — the head of CatCo is going to personally interview Supergirl? She’s not going to just send one of her hundreds of employees to do it for her and then reap the benefits? But this is a superhero show, so the realism is not exactly the point anyway.

No, the reason I love Cat is because she is really good at what she does — better than she realizes, even. Now that Supergirl’s limitations have become obvious (“You’re relying on your strength without technique,” Alex tells her), Cat has taken it upon herself to “take charge of Supergirl’s narrative.” She does this in two ways: asking James to use his connections with Superman and The Daily Planet to score an exclusive interview with the new hero of the hour, and telling Kara that Supergirl would best be served by starting with smaller feats of strength and building her way up to saving the world.

That first point is a bit awkward, because James already has an uncomfortable history of mixing friendship and business. He admits to Kara that his own career has been shaped less by his own accomplishments but instead by his proximity to Superman’s. Now that he’s working at a new publication, he wants to make his own name for himself. Still, once he understands that the interview really will help Supergirl’s image in the public eye, he works with Kara to make the interview happen.

The second point was, of course, unintentional. When Cat confides in Kara about her lack of confidence in Supergirl, she has no idea that she is actually talking to Supergirl. But Kara takes her words to heart. Alex, James, and Winn have become an expert team of trainers, and she spends much of the episode honing her natural abilities so that she can actually use them to the benefit of others. Without even realizing the extent of her impact, Cat truly has taken control of Supergirl’s narrative. She’s come a long way from her start as Perry White’s gossip columnist.

The dynamics between Cat and Kara / Kara and James / Kara and Alex are key to making Supergirl work as a show. Which is good, because so far, the villains are frustrating and not particularly interesting. Astra’s plans are spelled out so plainly that it’s hard to feel threatened (or even invested) in the henchmen of the week. This isn’t about them at all. And I’m not even sure we’re meant to care too deeply about Astra’s larger plans, because she’s not interested in a slow, methodical build. She reveals herself to Kara in this episode, eliminating weeks of tension that many viewers probably anticipated. Now Kara knows that it’s her mission to fight her aunt, and given how quickly she’s mastered every other task put before her, it’s not going to take long for her to figure out how to do it.

Unless, of course, Astra is not the real villain of the season. At this point, we don’t know much about DEO head Hank Henshaw (AKA David Estes! Remember him, from the not-awful parts of Homeland?). We know that he’s lost some of his family, we know that he is skeptical of Supergirl being an asset to his agency, and we know that he has deep professional respect for Alex. That’s mostly it.

Oh, one other thing — we know now that, sometimes, Henshaw has glowing red eyes.

If you, like me, were surprised by Henshaw’s glowing red eyes toward the end of the episode, then you, like me, have probably not read many comics! (I mean, I’ve read a few. Get at me if you wanna talk Alison Bechdel.) Limited research tells me that, in the DC Universe, Henshaw has been an enemy of both Superman and the Green Lantern, and he was later reintroduced as “Cyborg Superman.” So the glowing red eyes that we see ever-so-briefly in this episode are…cyborg eyes, perhaps? Is there an allegiance between Henshaw and Astra that we have yet to see? Or is the DEO a cover for a larger operation to destroy all alien life on Earth, Kara Zor-El included? My instinct is to say that it’s far too early to tell, but given the quick pace at which this season is already moving, I wouldn’t be shocked if some of these questions are addressed as early as next week. Stay tuned. 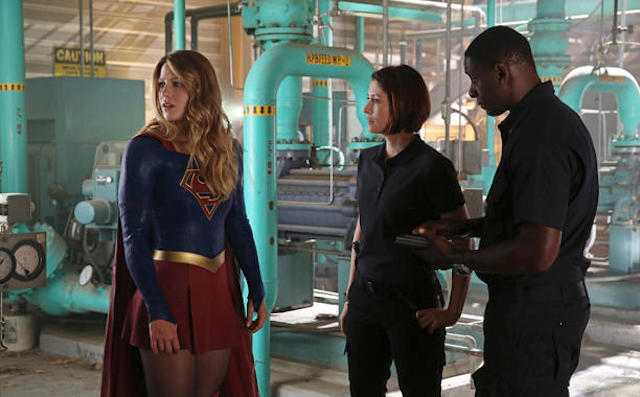