It’s a little hard to believe that it took the people of Metropolis and National City this long to figure out that Superman and Supergirl are related. If nothing else, there must be a few Internet nerds in the DC universe who have figured out that the “S” is not an “S” at all but the family crest of the House of El, right? Still, even if they had, the connection between Kara and Kal-El wasn’t going to make headlines until Kara confirmed it. Which she did—by accident—during her exclusive interview with Cat Grant.

The slip came in response to a “Gotcha!” question from Cat, who clearly had not been expecting Supergirl to have such strong interview stills. “Any plans to start a family?” she asked, looking for a reaction.

“Nobody asks my cousin that question,” Supergirl shot back, blowing her cover while becoming the new spokesperson for the #AskHerMore campaign. By morning, CatCo’s control of Supergirl’s narrative has been reduced to that single soundbyte, with everyone in National City considering the implications of this news.

(I want to pause for one moment to acknowledge that, as brilliant as Cat is, she is the only person who has seen Supergirl in the flesh and not figured out that she’s Kara Danvers. The glasses and ponytail are pretty deceptive, I guess.)

The question of this week’s episode boils down to this: can Supergirl hold her own without Superman, or is she going to rely on him when the going gets tough? While Kara’s abilities have clearly shown immense promise, and her dedication to helping the people of National City is indisputable, Cat is concerned that she really has what it takes to reach legendary status.

Cat’s critique of Supergirl—which the audience is meant to view as unfairly shortsighted—is a thinly veiled send-up of the endless think-pieces that older journalists write about millennials. Cat even pegs Supergirl as a millennial, titling her article, “Millennial Falcon: Every Generation Gets The Superhero They Deserve.” Her hypothesis is that, just as millennials are stereotyped as relying on their parents for financial stability and personal validation, Supergirl will run to her cousin whenever she encounters an enemy too strong to destroy on her own. Why, then, should National City count on her? Shouldn’t they continue trying to court Superman to leave Metropolis and be their savior?

And it’s not only Cat who sees Superman as the infallible hero to whom Supergirl is still struggling to measure up. Without meaning to, James let Kara see his confidence in her waver. When Kara is sent to save Attractive Rich Guy Maxwell Lord from the grips of Reactron, this episode’s awfully named Villain of the Week, she passes out, leaving James to call in Superman as back-up. When Kara wakes up and sees Lord on TV, thanking Superman for saving his life, she’s devastated that one of her closest friends—and the guy she is pretty clearly crushing on—has doubted her.

It’s not so simple, of course. James points out that everyone needs help sometimes, and he was genuinely worried about Kara’s safety. Still, he recognizes that his impulse is to call Superman whenever he’s in crisis, and it’s time to break that habit. So the next time Reactron shows up in an attempt to kidnap Lord and kill Kara, she turns to her mortal friends—James, Henshaw*, and Alex—to help her utilize her own powers to save the day.

In a twist ending—James is dating Lois Lane’s sister, Lucy? Or, more likely, they split up when he moved to National City, but things are still, in social media parlance, “complicated,” with them. This is throwing a wrench in Kara’s plan to ask James out on a date, and she is not seeing Winn as a viable substitute at this point. (And, really, good for her—James is way hotter.) But there’s reason to believe that Lucy might soon create a whole lot of complications for Kara: in the DC universe, Lucy eventually becomes Superwoman. Considering how Kara struggled to accept the “girl” suffix in the pilot, I anticipate that encountering a new hero, dubbed “woman,” will be difficult for her to swallow. I’m excited to see how Lucy’s involvement in the show develops, and what impact her relationship with Kara will have on Kara’s arc.

*Henshaw is maybe not mortal? We don’t know yet. This episode didn’t answer the question about his glowing red eyes. Now, however, he also seems to have some sort of telepathy which allows him to sense when Alex is up to no good (read: using DEO technology to help Kara against Henshaw’s direct orders). But, in the end, he helped in defeating Reactron, so there is no real reason to suspect that he’s a bad guy just yet. Maybe he just wears funny malfunctioning contact lenses? 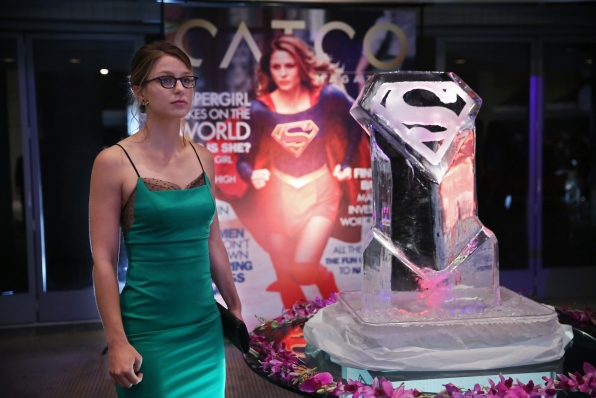