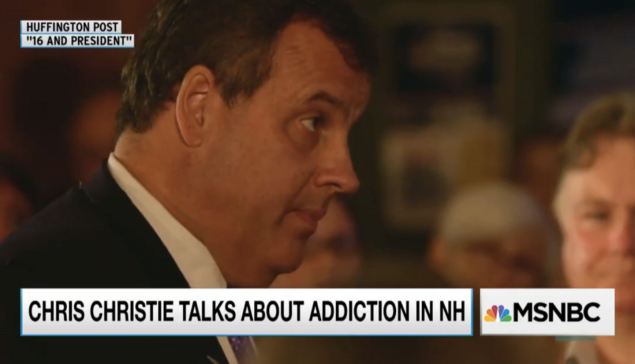 When Rachel Maddow is at her best, her MSNBC show TRMS is enlightening, direct, fair and thought-provoking. It sure was Tuesday when she showed New Jersey Governor Chris Christie talking with The Huffington Post about his mother’s death from lung cancer.

Mr. Christie’s poor poll numbers have knocked him off the main stage for the next Republican Presidential debate on Fox Business Network next Tuesday. But he spoke from the heart in this personal matter in an interview recorded in October.

“She was addicted to nicotine,” Mr. Christie said of his mother. “No one came to me and said, ‘Don’t treat her because she got what she deserved.’”

Family stories like these—dare we call them evidence of “Compassionate Conservatism”?—have poured forth from Republican candidates recently as the campaign conversation turns to the return of the heroin plague and to the damage done by mandatory sentences to people for non-violent drug crimes.

His mother wasn’t denied chemotherapy or radiation treatment, Mr. Christie said, because she got herself hooked on tobacco as a teenager. But people strung out on drugs or alcohol are thought of differently and that bothers Mr. Christie.

“Yet, somehow, if it’s heroin or cocaine or alcohol, we say, ‘Bah! They’re getting what they deserved,’” he said.

Mr. Christie said he is “pro-life” and that means more than opposing a woman’s right to choose abortion.

“You’ve got to be pro-life for the whole life, not just for the nine months you’re in the womb,” Mr. Christie said. “They haven’t done anything to disappoint you yet… the 16-year-old teenage girl on the floor of the county lockup, addicted to heroin… her life is just as much a precious gift from God as the one in the womb. And we need to start thinking that way as a party and as a people.”

Another candidate speaking in this vein is Ted Cruz, who appeared with Jake Tapper on CNN Thursday night to discuss, among other things, the death through drugs of his half-sister.

“It’s a horrible disease,” Mr. Cruz continued, speaking of drug addiction. “She struggled her whole life with drug and alcohol addiction… she was living in a crack house.”

Mr. Cruz said he financed the military-school education of her sister’s son, who tried to visit her.

“She overdosed,” Mr. Cruz said. “Joey came to the apartment and found her dead.”

A third candidate speaking freely on this theme is Jeb Bush, the former governor of Florida, who told how his daughter, Noelle, succumbed for part of her life.

“She went through hell,” Bush told The Huffington Post. “And so did her mom and so did her dad… I don’t know what it’s like to lose a daughter. But I almost did.”

A fourth candidate in the conversation is Carly Fiorina, the former businesses executive who discussed during a recent debate the loss of a step-daughter to drugs.

Ms. Maddow—summing up Mr. Christie—said you have to praise the New Jersey governor for his skill at communicating an important message, “whether you like Chris Christie as a candidate or not, whether you like him as a politician or not.”

Maddow called the viral video “off the radar of the Beltway press” but it didn’t take Fox News long to catch up. Two nights later, Fox’s Megyn Kelly—Maddow’s direct competitor—ran the same video with the words “breaking tonight” flashing under Mr. Christie’s face.

But Ms. Kelly had no time for a fresher story about a new book about former President George H.W. Bush (41), a Republican whose son—Former President George W. Bush (43)—invaded Iraq. The elder Bush is highly critical of Dick Cheney, vice-president for the second President Bush, and Donald Rumsfeld, the secretary of defense for his son.

This is interesting in light of Mr. Hannity’s track record. When George Zimmerman killed Trayvon Martin in Florida, Hannity took up Mr. Zimmerman’s side and brought him on as an exclusive guest when the white Mr. Zimmerman faced allegations of racism.

And when Cliven Bundy and his gun-wielding supporters threatened to go to war with the Federal government over a land-use fee out in Nevada, Hannity turned him into a celebrity—until the day Mr. Bundy went on and on about how African-Americans were better off as slaves.

But Mr. Clarke is down against black-on-black crime and he sees no police brutality that involves race. These issues drive Mr. Hannity’s agenda. So when Geraldo Rivera of Fox brought up police brutality on Tuesday, the lawman let him have it with both rhetorical barrels.

“I want to correct Geraldo, something he said about police brutality, as it’s being defined,” Mr. Clarke said. “It’s not a pervasive problem in America, Geraldo. You know better than that.”

Mr. Clarke then elevated his target to President Obama.

“He is hallucinating if he thinks he’s improved race relations in America,” Mr. Clarke said. “He’s delusional if he really believes that.”

Mr. Clarke is a striking screen presence. He wears a thick and trim salt-and-pepper beard with mustache and glares at the camera with a stern stare. His words come in clipped burst like Jack Webb on “Dragnet”—except that Mr. Clarke carries a meaner mien than old “Joe Friday.”

In Wisconsin, Mr. Clarke has shown up at public events in a cowboy hat, riding a horse. He has threatened to run for mayor. He wears a deep blue uniform with four stars on each shoulder and, on his chest, a bunch of shiny things including an American flag pin and a five-point star badge.

The Sheriff told Mr. Hannity that race relations are a healing “scar” left over from slavery and said Mr. Obama “came along with sandpaper, rubbed it raw and then poured salt in it to inflame it for political gain.”

When Mr. Rivera began a response with, “I think that’s too harsh,” the Sheriff soon interrupted and said, “Deal with it.” When Mr. Rivera persisted, the Sheriff interrupted him again and said accounts of police brutality and racism are “emotional and anecdotal.” He scoffed at “this ‘driving while black’” belief.

Sheriff Clarke even said with a straight face that “gun-control has its roots in racism going back to the 1700s, Sean, when it was unlawful for a black person to possess a firearm to guard against mob lynchings and kidnapping.”

He referred to Hillary Clinton as “Mrs. Bill Clinton” and said “she’s just pandering” on the race issue by visiting families of young black men killed by white cops. Ms. Clinton also spoke of gun safety regulation. This is frowned upon by Mr. Clarke, a celebrity in the National Rifle Association.

“Look, this is a winning issue for Republicans if they would just get their arms around it and take ownership of it,” Mr. Clarke said of gun “rights,” as some read the Second Amendment. “Don’t back up, don’t back off, on this issue of gun control.” 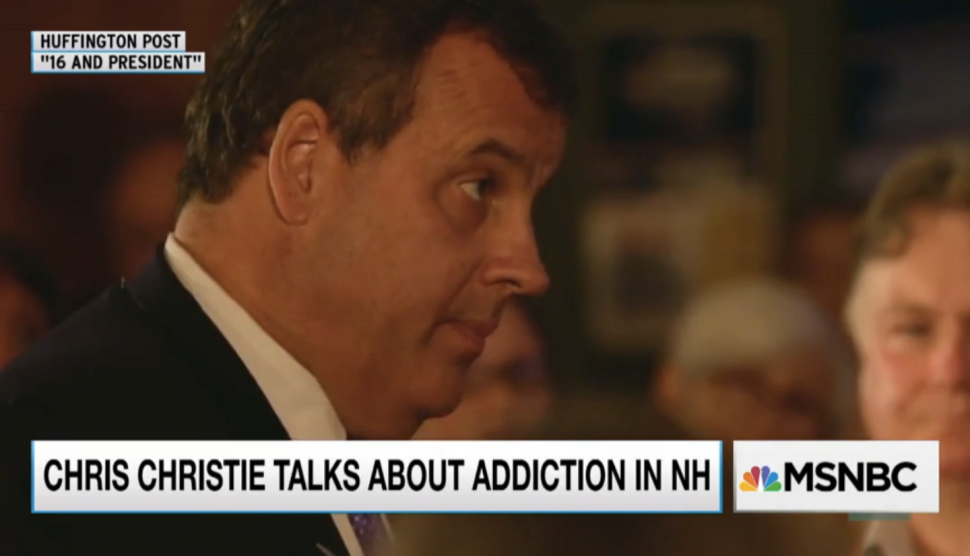