Back in the 1970s, Robert Kupperman, former chief scientist for the U.S. Arms Control and Disarmament Agency, wrote two classified papers on the prospect of a mass terrorist attack on American soil arguing that terrorism was neither static nor an irrelevant mode of warfare. His advice was ignored.

America’s counter-terrorism policies, then as now, have been based on the misconception that the future is the present, only more so. Life is a linear equation where change is a matter of degree, not kind.

This is the comfortable myopic thinking that dominates bureaucracy, the kind of thinking that caused Henry Kissinger to opine that the State Department should be closed down because four years spent in its conformist atmosphere so atrophied one’s brain that creative thinking became impossible.

The future as the present guided American counter-terrorism policy even after the 1993 attempt by radical Muslims to bring down the World Trade Center. Old mantras die hard. Closed minds die off before they open.

The reality of terrorism is that while we are mired in our narrow thinking, terrorism has continued to become more audacious, more creative and more innovative.

These are the guideposts of counter-terrorism thinking before 9/11 and what made 9/11 so shocking. Terrorists were not suicidal. With the exception of the European nihilists and the Japanese Red Army, terrorists were rational actors. They hit largely random symbolic targets and their prime concern was access to the public agenda through publicity and a seat at the negotiating table. Airline hijacking was a means to generate publicity.

Muslims in America presented no threat. They were largely middle-class members of their communities and were more concerned about socio-economic advancement than breeding some crackpot version of Islam. Besides, as some authorities noted in classified lectures, Islam abhors suicide.

As a scientist, Kupperman understood that equations are not necessarily straight lines; they can double back on themselves. Systems do not stay in homeostasis; their boundaries can rupture.

He told a bureaucracy whose mind was closed, whose comfort zone was thermostatically controlled, that terrorism would be innovative. The future will look nothing like the present. The dramatic event, a mass murder that will eclipse the attack on Pearl Harbor, is in the offing, probably out of Islam.

He said the things those in power did not want to hear, challenging the bureaucracy’s mantra that getting killed by a terrorist was less likely than being struck by lightning. Those terrorist organizations that were sufficiently adept tactically at conducting an attack on American soil were sufficiently sophisticated politically not to do it. They understood both the political and military costs of American retaliation.

Indeed, the quintessential dismissal came from the State Department bureaucracy.

While much of this thinking started with the Jimmy Carter administration, the reality of Washington is that while administrations come and go, the bureaucracy is there forever. Its mindset really is etched in stone, and this was the mindset of an increasingly liberal bureaucracy.

Terrorism was theater—an irritant, not a serious problem.

In 2002, David Abshire, the founder of Washington’s Center for Strategic and International Studies, noted that 9/11 might have been prevented if we had listened more closely to Kupperman’s incessant warnings.

The reality of terrorism is that while we are mired in our narrow thinking, terrorism has continued to become more audacious, more creative and more innovative. We continue to be reactive while terrorists push the boundaries of warfare. And worse, as we closed our minds to the possibility of a different form of terrorism before 9/11, our minds are still closed.

Through every horrific act of terrorism, including the one this week in Paris, President Obama is incapable of mouthing the words “radical Islam” and “terrorism” in the same sentence. Meanwhile, every single initiative Mr. Obama has tried in the Middle East has failed utterly—Libya, Egypt, Israel, Iraq, Iran, Syria, Yemen and more. Yet, Democratic presidential candidate Bernie Sanders thinks—as does Mr. Obama—that climate change is responsible for terrorism. State Department spokesperson Marie Harf thinks the lack of job opportunities has helped create the Islamic State. Hillary Clinton, following Mr. Obama’s example, cannot find the words “Islam” and “terrorism” in the same sentence.

Mr. Obama is more concerned with resettling Syrian “refugees” at a time when the Islamic State openly boasts that it has thousands of fighters among the refugees, and true to its boast, one of the mass murderers in Paris was a Syrian refugee. Pictures of the refugees storming Europe show young men of military age absent women and children, the strangest face of refugees in recorded history. And it is fair to question the president’s priorities. With infinite demands on his time, one wonders whether he has devoted enough of it to fighting terror.

As retired Gen. Jack Keane (a New Yorker who was the subject of a terrific book on changing military strategy) said on Sunday TV, this was a well-planned attack. He noted that rather than spending three years negotiating with Iran, we should have been developing a strategy for Isis. The Sunnis will never let the Shia dominate them; the local Sunnis support Isis, and our allies Saudi Arabia and Kuwait are the bankers of Isis.

The attacks in Paris required military-style coordination and access to weapons prohibited under French gun control regulations. The attackers had to have people inside Paris to do surveillance and plan the attack and people outside to procure weapons and smuggle them into France. The idea of a coordinated attack at different locations is a tactic previously used many times, including in Washington, D.C., during the Hanafi Muslim terrorist attack in March 1977. It is a textbook example of how to overwhelm a city’s ability to defend itself in the short run and provide immediate tactical advantage to the terrorists.

The dissection of the Paris attacks will show that this is a harbinger of things to come on American soil, for as ISIS has said, American blood is the sweetest. In the meantime, the terrorists will become more creative and innovative while we stumble over what descriptive semantics will give the least offense and once again fail to comprehend the seriousness of the problem.

America is about to become a society under siege, and when the inevitable happens we will find ourselves like other Western democracies confronting a new balance between the age-old conflict between freedom and order. It presents a difficult set of choices, and the experiences of other Western democracies that have faced those choices do not provide clear examples. Panic often extinguishes the torch of liberty. Yet, a society under siege cannot operate like a society that is not facing mass murderers whose only concern is heightening the casualty rate and lacerating public sensitivities.

New York City actually provides a beautiful example that it doesn’t have to be this way. New York benefits from the remarkable way in which the Arab community has become a central part of our city and its economy. Our best line of defense is the Arabs who live here, since, unlike in Paris, there is a fairly well integrated, diverse Arab middle class. In fact, New York might be the only major city on earth in which Jews, Christians, Buddhists, Muslims, B’hai and Hindu live side by side, do business with each other and without ongoing conflict based on religion.

Lord Shackelton, who authored Britain’s draconian Prevention of Terrorism Act, said that the basic freedom of British subjects was to leave home every morning without feeling they were going to become casualties of terrorism. Without the right to life, all other freedoms pale.

Of course, not everyone even in Britain agreed with those sentiments. Either way, we Americans need to have that discussion. We cannot begin to engage in it as long as we are more concerned about using words that some might find offensive rather than confronting the reality of the threat of radical Islam and the continuing prospects of mass casualties on our home soil. 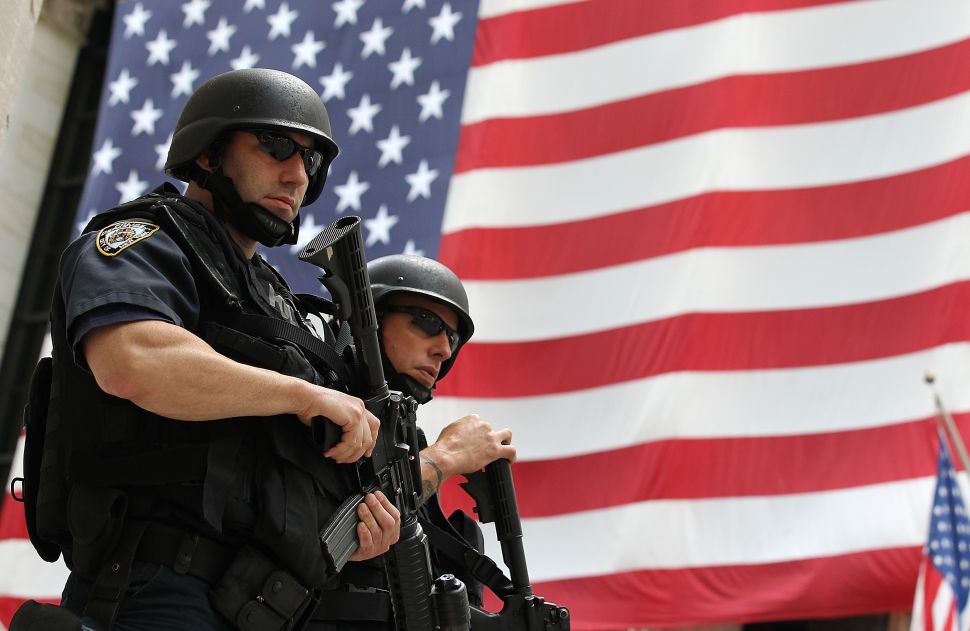