Is it December already? Traditionally eggnog and mistletoe dominate this month, but, for New York’s art worlders, champagne, beaches and fine art have become synonymous with this time of year thanks to a Swiss art fair.

Art Basel originated in the strategically placed city of Basel in 1970, but the Miami edition wasn’t born until 2002. The concept belonged to a previous director named Lorenzo Rudolf but his successor, Sam Keller, was instrumental in turning this once-insular trade fair into the global lifestyle brand that it is today. This presence has only expanded under the leadership of Global Director Marc Spiegler and the newly appointed Director of the Americas Noah Horowitz.  But despite all the glitz and glam that has surrounded the fair over the years, the team has never forgotten to vehemently cultivate Art Basel’s main ingredient: fantastic art.

The 2015 edition of the show is bigger (267 galleries) and stronger than ever, and we’ve selected 7 booths that you should make sure to check out during your rounds.

Rosalyn Drexler at Garth Greenan, Art Basel, Survey
Acclaimed novelist, Obie-winning playwright, former professional wrestler and pioneering Pop artist Rosalyn Drexler clearly doesn’t need our accolades, but she’s going to get them anyway. Her noirish mass media representations have always charmed by tapping into Italian neorealist film styles, crime dramas and a host of other 20th century representations from theatre and film. All the while, Ms. Drexler has continually drawn inspiration from her “paint and cut paper” fine art predecessors, such as Matisse and Motherwell. Considering her track record, she’ll probably take home some sort of booth prize for this solo effort so make sure to catch it.

Egan Frantz at Michael Jon Gallery, Art Basel, Nova
Egan Frantz is a very unusual guy, and we like him that way. He’s used some odd items in his previous work: baguette pans, carpet foam and even his laundromat receipt, but there is a method to his madness, and that method usually revolves around wordplay. This booth will offer a fresh batch of works, including some new gridded “toilet paper works” that cannily reference everything from Agnes Martin to mythic scrolls. Mr. Frantz then uses his bicycle tires to draw gestures onto this lowly substance, creating marks that resemble the basics of a primordial language while also creating some tasty puns (skid marks on toilet paper, get it?) Few young artists today have managed to formulate surprising immaterial armatures for what is often deemed “conceptual” work, but that is exactly what Mr. Frantz has done, and done well. Don’t sleep on it.

Henry Darger, Susan Te Kahurangi King, Martin Ramirez, Judith Scott, Eugene Von Bruenchenhein, and Adolf Wölfli at Andrew Edlin Gallery, Art Basel
This is basically an All-Star team of outsider artists, brought to you by the leading New York gallery for this genre. It’s impossible to pick a favorite, but It will be particularly exciting to see more works by the enigmatic Susan Te Kahurangi King, who had the town talking in 2014 about her gorgeous show at this gallery that year. The New Zealander stopped speaking around age four but started drawing prolifically into her thirties. Then, suddenly, she stopped completely. Almost twenty years later in 2008, she started making art again—right where she left off—without explanation. Her drawings weave all-over tapestries of illustrated body parts together, using Donald Duck’s bill along with fishes and fairy tale girls to make a glorious jumble of color and line. They will fit right in with the rest of these master artists.

Louise Nevelson at Pace, Art Basel
Born in 1899 outside of Kiev in the former Russian Empire, this daughter of lumber merchant ended up doing quite well for herself, yet she always stayed close to what got her there—a love of wood. Today Louise Nevelson’s elegiac freestanding and wall-based shelf works (which are always monochrome and often black) are well known and almost taken for granted. That’s why Pace’s booth at Basel will be such a treat, as it will feature, aside from her large-scale reliefs, her collage works from the 60s and 70s and her rarely exhibited assemblages. On top of that, the gallery will feature works that fall under “her sphere of influence on post-war and contemporary art” from a diverse group of artists that includes Tara Donovan, Kiki Smith and Maya Lin, among others. I think it is safe to say I’m pumped.

Emily Sundblad at Algus Greenspon, Art Basel, Nova
This saccharine Swede makes delectable quotidian paintings of things such as flowers, taxis and even oversized invites to her own shows but always with the deft and sexy paint-handling of a full-blooded dandy (or perhaps, dandette.) In true dandy form, Ms. Sundblad has also tried her hand at other inclinations, such as co-owning a gallery (the beloved Reena Spaulings Fine Art in the Lower East Side of Manhattan) and singing (along with guitarist Matt Sweeney). Oh, and she was also selected to be part of the 2014 Whitney Biennial (along with collaborator Loretta Fahrenholz) for her 2011 film Que Bárbara. Clearly she’s never bored, and we’re sure you won’t be if you happen to wander into her solo effort at Art Basel.

Zilia Sánchez at Galerie Lelong, Art Basel, Kabinett
Cuban-born, Puerto Rican-based artist Zilia Sánchez will raise a few eyebrows with this gallery’s presentation of her recent and historic paintings and works on paper. Ms. Sánchez’s stretched topographies, which contrast geometric forms and subtle color shifts with shaped and protruding stretcher elements—had rarely been seen outside Puerto Rico until her exhibitions at Artists’ Space in New York in 2013 and then at Galerie Lelong in 2014. While the repetition in Ms. Sánchez’s work is clearly connected to the American Minimalism movement (she graduated from Pratt Institute in Brooklyn in 1970), feminine curvatures and mythic references in her work also connect her to the Brazilian Neo-concrete movement of the 60s and 70s. With 2015 marking the beginning of a new era for Cuba and the US, Ms. Sanchez is sure to receive plenty of attention—both locally and from abroad—for her refined creations.

“You Must Go On. I Can’t Go On. I’ll Go On.” at Dominique Lévy, Art Basel
Endgame strategies take the floor in this power-packed booth installation, curated by Ms. Lévy and gallery director Begum Yasar. Here you’ll find seminal works by American artists such as Frank Stella, Agnes Martin, Andy Warhol, Yayoi Kusama, David Hammons and many, many others. Inspired by Samuel Beckett’s 1953 revolutionary novel “The Unnamable”, this museum-worthy booth correlates the novel’s meditation on the nature of its medium to postwar painting’s boundary-pushing strategies. In some sense, it’s a “greatest hits” album of postwar art, but one that is illuminated through an absorbing curatorial frame. It should be a treat for scholars. 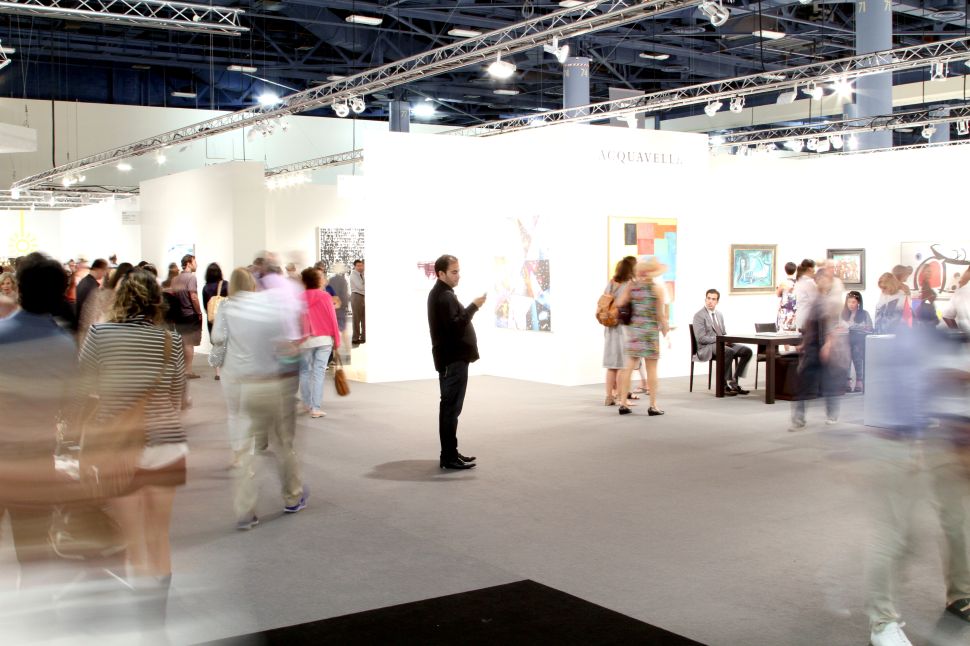