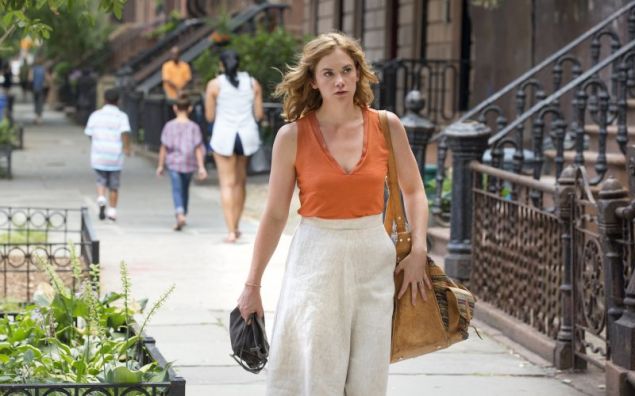 Alison (Ruth Wilson) goes to Brooklyn on The Affair. (Showtime)

So, what exactly is The Affair about again? I’m sorry, I seem to have forgotten. You know, memory can be a bitch, four sides to every story, yada yada yada sink back into the etc etc.

Is it still a mystery? Not really. The murder-y aspects of The Affair seem to have diverged to the Lost path,  where an entire episode will be unconnected mumble-mumbles until, in the last minute or so, the writers will be like “But how about this clifffffhangerrrrrr? *bwum*” Look, there’s like five people on this show who have a great reason to have killed Scotty Lockhart, depending on your idea of a “great reason” to kill someone is. Alison or Cole, Noah or Whitney, maybe even Luiza – one of them did it, and the rest know something about it based on one and a half season’s worth of knowing, sideways glances. So there’s no real “mystery” here, just more little layers that make ya go “huh, well that’s certainly a development.”

This week: Big Douchey Oscar showing up as The Affair’s version of Biff from Back to the Future. Remember? How Biff went from a pretty blatant attempted rapist to washing cars? Well Oscar went from Big Douchey Restaurant Owner to Big Douchey Waiter, and he’s just handed John Gotlief evidence that will apparently incriminate Cole or let Noah off the hook. Knowing the collective brainpower of Noah and Oscar, it will probably be the first draft of a book titled How To Totally Not Be A Murderer (by Noah Solloway).

Again, sorry, what is The Affair about these days?

Is it just a series of metaphors for…something? Like, Alison being forced to sign a series of rejection letters had to be a metaphor for, I don’t know, her severe lack of self confidence and worth? Or, Alison weirdly trying to ride her bike without hands HAS to be a metaphor, right? For, just like, I don’t know, lost innocence? Failure to be independent? A lack of balance? This is me literally throwing metaphors at the wall. And I do mean literally. I have an “Affair Metaphor” dartboard. I threw ten times before and ended up with 4 The Affair spec scripts. (And, weirdly, 3 / 4 of a The Leftovers episode).

Is The Affair even still about an affair? Not really. I mean, the affair happened. This is more like The Affair-termath. Although this show does exist in a weird universe where everyone is either on a second marriage or currently and/or recently in the middle of an affair. But right now, it’s mostly people pissed about a past affair. This did lead to Helen, much less high than last week (or maybe more high?) laying the absolute smack-down on Alison when she showed up at Helen’s brownstone. “One day someone is going to show up at your house, thinking they fell in love with the greatest guy on Earth.” Damn girl. That would be a 10/10 burn, but it’s knocked down a peg because at what point at any part of this show has Noah seemed like the greatest guy on Earth to anyone he came in contact with?

Is this show just an assembly of people who are awful at their jobs? Apparently. I mean, we now know Noah’s editor is terrible at his job, because he continues to gush over Noah’s book while leaving in lines like “”She was sex, the very definition of it. She was the reason the word was invented.” And Alison, who admittedly is supposed to be a terrible assistant, but man come on. She wasn’t even trying. I think we’re supposed to think her boss is being unreasonable, but if I hired an assistant and she spent half the time forgetting to make the hotdogs I clearly asked for, and the other half giving my husband exercise boners, I’d probably let that assistant go, too.

Special shout out to Luiza, the worst bartender at The End. If I owned a bar cryptically named The End, and one of my bartenders spent her entire night paying 100% of her attention to the smelly, bearded and possibly homeless taxi driver that wandered into the bar, I’d probably let that bartender go as well.

I guess, based on this episode, we could call The Affair a romance. But like, the grossest romance possible. A romance between this weird orbit of people who have no business together. A romantic link between men and women that, by all counts, should despise each other, would be totally justified doing so. Alison has no right to ask Cole to trust her again, and Cole doesn’t have a right to make her apologize, either. So what else is there to do than embrace in their old marital bed? It’s the reason Noah and Alison, two people who have negative amounts of chemistry, are together. It’s why Helen flew from Noah to Max. Because all these characters should go live on their own island in the middle of the ocean, but can’t, and each one is drawn to the other’s inability to be alone. The Affair is the slowest moving, most disgusting romance on TV.

Or MAYBE it really is about multiple dimensions. And aliens. Or maybe when Alison said “Sometimes I worry I’m not a real person,” she was alluding to the fact that The Affair is actually a ghost story. Ohhhh. Have you ever thought of that? How about that clifffffhangerrrrrr?

The Affair might be the fastest moving showing about romance as a metaphor for demonic possession on television today! (Outside of, you know, Ash vs The Evil Dead.) Because that IS what this show is about, right…how love can make your head spin (a full 360 degrees) while you barf up green pea soup while shouting “Let Noah Holloway and his Jesus complex fuck me!”

That’s certainly how Alison was feeling this week, after being treated like the Help (not The Help, obviously) and coming to learn that all of Montauk thinks she’s the biggest whore since Mary Magdeleyn. It’s never struck me as particularly believable that Alison “just has that kind of effect on men,” as Yvonne’s creeper husband puts it after getting a cripple’s boner during their “physical therapy” sessions. (And I called that, didn’t I?) Alison is subdued, quiet, and for all the sex we’ve seen her have with Noah and Cole, oddly devoid of any sexual energy.

I’ll point to the most obvious example I can draw: I accidentally watched the first season’s fifth episode this weekend instead of the current one–watched it all the way through, in fact, till I realized my mistake–and had the one (ha!) implausible part of this show answered for me. Why would anyone hire Alison to take care of their crippled husband without it being totally condescending? We know Noah has all these class issues that made him begrudge her for taking the position, but the eagerness with which Alison took the job belied a different answer: d’uh, the lady was a nurse.

Not only a nurse, but once upon a time, a nurse who had dreams of becoming a doctor. That’s why she tends to the crippled like they were her own precious Gabriel, though ostensibly with less baby boners. Alison is a creature of compassion: she tends wounded, injured things, which is what solidified her and Robert’s bond two weeks ago, when he was unable to put down his direwolf doggie.

But the sex demon that Noah has portrayed in his book, from which Yvonne eagerly read Robert portions of (in bed, because Noah’s book is going to be the next 50 Shades of Grey), does not resemble the person that Alison sees when she looks in the mirror. Obviously, it’s the Alison Noah “sees,” and that we as viewers also have to “see” every time we get Noah’s POV: a lustful, bawdy beer wench whose siren call tempts him away from his marital obligations. Boo-hoo, now we have to watch another hour of too-much coitus.

I almost thought that the lack of Noah this week meant that we’d finally have a reprieve from seeing Ruth Wilson’s sex face, up until those final moments in Cole’s narrative where the two stories finally intersected. Interestingly, and I hope this is something the show does more often, we didn’t have to see the scene through Alison’s eyes with slightly different details: instead we saw Cole’s day of sexual loving, ending with his ex-wife lying prone and helpless in his bed. We know, from first seeing the events of Alison’s day leading up to this, why she’d be particularly vulnerable to Cole’s advances, having been fired from the big house and unable to reach Noah after reading his manuscript painting her with a big scarlet letter. But Cole, having been thwarted during intercourse with his own version of Yvonne, and unable to seal the deal with Scotty’s Luiza, is actually seeing Alison through the lens of pure carnal interest, which gives the context of their sex scene more nuanced and complex than the Rashomon paint-by-numbers mess we usually get.

Yes, Alison, all the rich people in town consider you and your ex-husband nothing more than a sexual safari. Noah thought it, Robert thought it, Yvonne thought it, Helen thought it, that lady Cole was fucking and the husband that caught them mid-coitus thought it. Hell, probably the direwolf thought it as well.

As for the show’s central mystery: yes, we now know that both Cole and Oscar had motive to kill Scotty Lockhart: Cole because of his familial grudges with his younger brother (which may or may not include Luiza, but who are we kidding, will DEFINITELY include Luiza), a stolen business plan and the fact that Scotty could blackmail him (and Alison! Who now Officially Has a Motive!) with their sexcapades behind Noah’s back; and Oscar, who found his upward mobility permanently stunted when the Lockharts bought his Lobster Shack right out from under him.

Poor Oscar. If only he hadn’t called the Lockharts chicken. 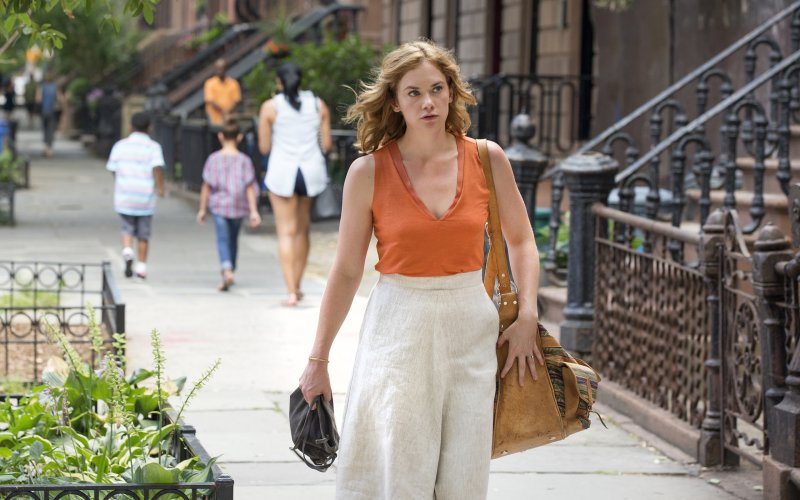