I’ve never attended a book reading. If you asked me why, I wouldn’t really have a great answer for you. Maybe it’s because standing in line to hear some goober read his or her book is just unappealing to me. (I’ve met a lot of authors. Most are total, Noah-level goobers.) Maybe I don’t fit into literary crowds. Maybe I’ve been suppressing a memory until just now, oh God, of my dog dying during Goodnight Moon story-time when I was five, and being read to leads uncontrollable sobbing. Oh, God.

Either way! The point is, never been to a book reading. So, since The Affair presented us with two wildly varying scenarios set at the big, college Descent-a-palooza, I’m going write down for clarity’s sake what last night’s episode taught me about the DO’s and DONT’s of book reading etiquette.

DO: During the Q&A portion, ask the author deep-level existential questions over the legitimacy of love or the reality of a higher power. Do this, despite the fact the author you came to see has written two books, one a failure and one about fucking his mistress in a Montauk shower. Extra points if you shout “DOES GOD EXIST?” without even being called on, as the moderator clearly stated there was only time for one more question.

DO NOT: Think too hard about any and all metaphors the author chooses to make, perhaps comparing love to a triangle, and accept that it makes sense. They are the author, after all.

DO: Use the Q&A to question publicly the talents and relevance of the author, whom you most likely just paid upward of $30 to watch read their book out loud. This one actually makes sense to me. I used to cover soccer as an undergrad for the Rutgers University newspaper. One time a marginally successful professional player showed up to one of the games, and I told him his “corner kick game was weak.” Worth it.

DO NOT: Throw down your phone number and basic level knowledge of The Great Gatsby like a fucking mic drop. Even in Noah’s shaky recollection of his own life, that seemed a little forward.

Even though I just spent maybe waaay too long making fun of this show, this was probably my favorite episode of The Affair’s second season. For one, it finally went back to what made last season interesting in the first place. It offered two vastly different viewpoints, which deepened our understanding of two different characters, as opposed to the show being like “here’s some sad people now.”

And it’s interesting, because more and more when we see Noah’s recollections opposed to someone else’s, he always manages to come off as more of a scumbag in his own memory. Helen’s memory was downright nostalgic, filled with pleasant strolls down snow-covered memory lanes and grudging but genuine admittances that she’s proud of what Noah achieved. It says a lot about her — Helen is the only character that looks willing to move on from, albeit slowly, from Montauk.

Noah, on the other hand, is never going to leave Montauk. I mean physically, yes, he’s on a book-tour because hot undergrads across America need to tell him how well he writes women. But mentally, everything is about Montauk. He wrote the thinnest of thin-veiled fictions about it, and not only got away with it but took it all the way to the bank. He still thinks he’s that guy. He can drunkenly attack 19-year-old book critics and barely pay attention to Skypes from his fiance and he can hook up with his publicist because he’s not the meek failed author anymore, he’s motherfucking Noah Solloway, literary powerhouse and affairmaster. And no one, not even the great  Bruce Butthole, can tell him otherwise.

For those fans playing The Affair Drinking Game (Tagline: “The least fun you’ll have with that sad bottle of Chardonnay you’ve been nursing all weekend!”) at home, you will have gotten sloshed last night! Haha, not as sloshed as Noah though, when he tried to punch a college kid–a black college kid (Jordan Carlos, aka Stephen Colbert’s “black friend” Alan for the win in that role!)– and ended up as the literary scene’s new “bad boy.” After getting passed over for the PEN/Faulkner Awards, no less! Does The Affair solely exist to bring us biting satire on the echo-chamber of privilege that is the New York literary scene, as these past two weeks (and season premiere!) suggest? Or is our collective ego just a casualty of war on this show?

Either way, here’s some reminders of the Drinking Game Rules. (I put mine on a Post-It Note and slap that little guy right on top of my case of 2013 Landmark Vineyard. Feel free to send in suggestions!):

Drink: Every time Noah says something so clueless that it grounds the whole show to a halt as we stop to question how this guy managed to write a book. Let alone a shortlist finalist for the PEN/Faulker Awards, Jesus Christ. (When he doesn’t win, Noah pouts–IN NOAH’S OWN RECOLLECTION, HE POUTS!– “I’m a victim of affirmative action. As a straight white man. I’m disqualified from those awards.”)

Drink: Every time Noah Solloway name-drops Franzen or one of Franzen’s books. (To contextualize the last idiot turdlet he shat up on Helen: “The Corrections lost to Bel Canto.” To which she correctly replies, “But I loved Bel Canto!”)

Take another shot: For all the subsequent times the show asks you to suspend your disbelief that the Noah Solloway we know would have written anything that could have been shortlisted for the PEN/Falker Awards. (Tonight’s reading provided ample, Franzen-esque paragraphs that are astonishingly well-written, considering Dominic West seemed barely able to keep his accent in check whilst reading:

“Three feet further and he wouldn’t live there anymore. The wild girl he’d fallen for all those years ago was standing behind him in the brown stone hallway. Her ring, the one he sold his Fiat for, now sat twisted off her finger, and accusing him atop the radiator.

And through the doorway, above the tea set she’d liberated from a little Moroccan pension (SP?!) where they spent their honeymoon, hung a portrait she developed of Whitman as a baby. The winter three blizzards hit the city in quick successions, and the pipes froze then burst in their fifth floor Harlem walk up.

That was the winter he decided to accept the loan from her parents. He could live without comfort, perhaps forever, but he couldn’t stand to see her afraid. By the time the snow finally melted, they had purchased the brownstone he was now leaving. What has become of her, that bold unafraid girl?  What had become of him, who had worshipped her?

Three feet became two, two became one, and then he was gone.”

On the other side of the house, surf broke, and clung to the shore. She unclasped her top and walked backward into the steam of the outdoor shower. A pit opened in his stomach. Without breaking his gaze she reached down and stepped out of her bikini.

“Are you coming?” she asked, as if he was already inside her.

What?? This is in the same book? Is Noah’s real crime plagiarizing that one Franzen book nobody read? I mean, throw in a couple of bird references, and you’re basically there.)

Take some amphetamines: Every time a snarky student–minority or otherwise!–manages to not only publish notable book reviews (sorry: “literary novel reviews”) but has already sold his memoir, making Noah (and the audience of the show) feel incredibly inadequate. All while still managing to bolster Solloway’s tyrannically racist and sexist literary worldview, so that’s the upshot! And it’s time for you to take a double shot!)

Do a bump: Every time Whitney makes the least right decision and is tacitly encouraged by Helen and Noah’s bourgeois liberal guilt.

Shoot some smack: Every time Noah’s publicist can only explain her job in terms of what it won’t entail. (This week: “I don’t mix work with this kind of pleasure.” OKAY, MILLENNIAL! Get your pumpkin spice half-caf soy venti and take a hike!)

Murder Your Fiancee’s Ex-In-Laws: Haha, just kidding. Come on guys, Noah didn’t kill Scotty. Resist the parallels that Sarah Treem drops all over the place: we are not, in fact, watching Purity: The Mini-Series. (Though that would be great! Hey guys, remember when Noah Baumbach was doing The Corrections for HBO and Ewan McGregor was going to star in it? Is there a way we can vote for HBO to put that back ON the docket?) 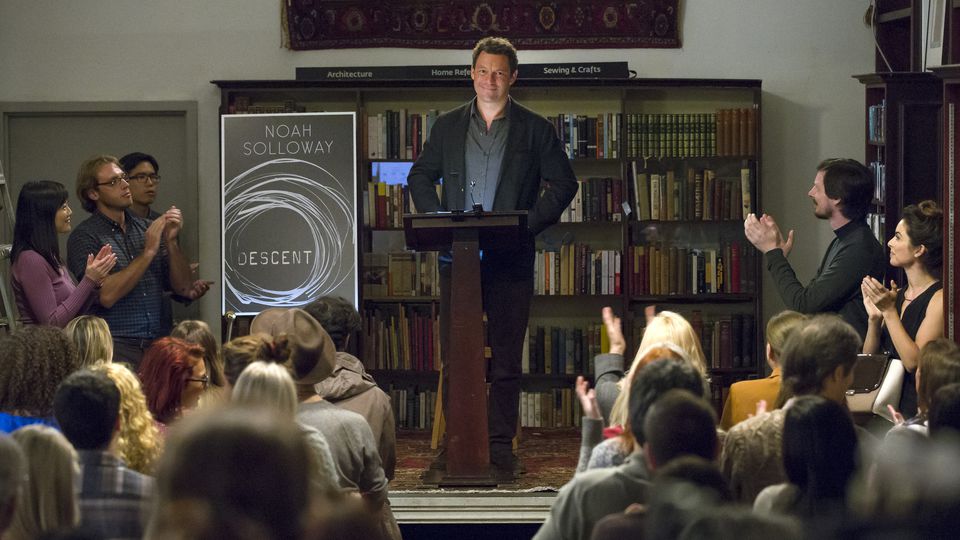