It’s not every day you’re invited to take a trip to Iceland—it’s been a dream of yours for such a long time, can you really say no?

Known for its gorgeous landscapes, geothermal pools, fish (and ice), Iceland also has an incredible music scene. Icelandic artists like Björk, Sigur Rós and Of Monsters and Men play to sold-out crowds in the U.S., however, there’s another band that’s just as popular in Reykjavik, but hasn’t fully broken out in the U.S. yet—Barði Jóhannsson’s Bang Gang.

Bang-Gang doesn’t tour often; this rare concert in Reykjavik was very special to the community.

During my trip, I stayed in Reykjavik, where it was almost impossible to go into a store and not see a Bang Gang record on display. On the first night of my stay, I experienced a rare performance from Bang Gang at Gamla Bíó, and after chatting with Icelandic concertgoers outside the venue, it was clear that Jóhannsson’s fanbase in Iceland (and the U.K.) is just as large (if not larger) than Sigur Rós’ following. The show was to celebrate Bang Gang’s album release for The Wolves Are Whispering—the band’s first record in seven years. Jóhannsson doesn’t tour often; this rare concert inReykjavik was very special to the community.

Despite Bang Gang’s cult following overseas, a U.S. crossover has remained elusive. That, along with Jóhannsson’s talent, made me even more interested in getting to know him and how his music has been driven by the Icelandic landscape and community. At Hotel Alda in Reykjavik, Jóhannsson opened up about his longtime musical project, the Icelandic music scene and the grassroots background of his music.

[youtube https://www.youtube.com/watch?v=N_NiTYqbaDM]
Observer: You’ve been a musician for a long time, and Bang Gang has been around for a while. Has your goal been to be solely a big Icelandic artist? Do you want to break out into the U.S. music scene?

Barði Jóhannsson: I’ve never thought about any of this, but being an artist in Iceland and doing indie music, there are not enough people to live on it. There are 360,000 people here now, and if you’re indie, you’re indie for 360,000 people. I’ve wanted to expand, but I’ve never had a business plan where I really want to be “this” or “that.” It happened accidentally. I’ve kind of been an outsider in the scene here. I have friends in all genres, but I also didn’t play by the rules.

I’ve done basically everything more or less by myself, which can make managers look bad. I’ve never had a manager. I had a radio show and I had a TV show and all of them were not supposed to be popular, but they became popular. It was basically anti-radio. At the time, people really needed that. I did [radio] for about a year.

‘Maybe we’re magicians from Iceland. We’re so mysterious coming from this island.’

When I do TV interviews, I am myself and hosts are not really used to that. Interviews have been quite funny because hosts end up looking fake and I’m being myself. Sometimes, if I’m asked a stupid question, I answer like I’m asked. For example, a host asked me how much money I made, so I asked him back. He didn’t want to tell me, so I didn’t tell him. I don’t like to participate in fake things.

What has been the biggest challenge for you breaking out of the Icelandic music scene and into the U.S. music scene?

I just don’t think too much about “breaking into something.” What I think about is, that it would be great to have a release in the U.S. and get some cool people over there listening so when I do my indie stuff there are more possibilities of people listening to it. I really don’t think about it. I’ve never seen myself as someone who is a rock star or something.

You can see sometimes in bands that people are imitating something they’ve seen and who they want to be. I’ve never wanted to be anyone—I’ve never seen myself as any kind of rock star. I just want to make music and reach people who would possibly like it. That’s my plan.

When I was starting, I didn’t have any expectations of any airplay on the radio. When I started, I never thought about a music career or anything. I did two songs and I didn’t even have a band name when I was signed in France on Warner Bros. I suddenly had to find a band name and released one seven-inch with my friend Hendrik under the name Bang Gang. When I had a record deal, I was like, “oh shit, I need to find a name for this band.”

There has been no strategy, and that’s also why there’s a long time in between records. Sometimes I want to do film scores or classical albums or a score with an Icelandic hard metal band. I did a score with an Icelandic metal band for a gay soccer movie. The sillier the ideas, the more likely I’ll say “yes” to it. I’ve done a surrealistic opera in France with dancers, a choir and an orchestra. If I really had thought I wanted to break my band into the market, I just would have focused on my band. It would be boring to just do one thing, for me at least.

‘I’ve never seen myself as a rock star…I’ve never wanted to be anyone.’

A lot of the music that comes out of Iceland is magical to some degree. Why do you think that is?

I don’t know—maybe we’re magicians from Iceland. We’re so mysterious coming from this island. I have no clue what it is. There aren’t too many things to do in Iceland. During the week, there’s nothing to do, so we’re a lot of times by ourselves. I think our music, even though it sounds very open—it’s really introverted. I think when it comes to writing music we are honest and give a lot of ourselves in it, but we can also have humor about it, too.

What artists influence your music and your latest release specifically?

I would say there’s nothing specific, but my music taste has been really weird since I was 15 or 16. I was one of the first people to listen to hip-hop. My friend had a cousin who worked at Sony in the U.S. so we got the first Spanish Cypress Hill album. He would get a lot of the first hip-hop records. We would put on a ghettoblaster and play basketball, and there would be 100 people in Iceland listening to hip-hop. At the same time I would listen to death metal and also buy Janet Jackson CDs. I just remember going to the record shop and buying Leprosy and The Best of Janet Jackson. Then I had a Sonic Youth, Doors and Burt Bacharach period. I don’t like opera, so that’s why I wanted to do one. Most people, when they say they don’t like something, I think they have to do something. I tried to make an opera I liked. And free jazz. I can’t stand free jazz.

‘I did a score with an Icelandic metal band for a gay soccer movie…The sillier the ideas, the more likely I’ll say yes to it.’

How did you end up collaborating with JB from AIR on Starwalker?

We met twice briefly, but we have a common friend in Paris and she proposed that we have coffee. We had coffee and then we made one song and liked it. Then we made more songs and then we had an album.

What can we expect from your upcoming Starwalker album?

It was ready quite a while ago and we were listening to it and thinking that it’s really cool. I think it’s just the two of us having fun. It’s dreamy, intimate and fun. It’s something that we’re really proud of.

Why not? I don’t see a reason why they shouldn’t. I’ve become more and more direct on my albums. My first album is describing me, but when I was 20 I was really reserved with how I felt. I would never tell anyone how I was feeling. Little by little I was more and more open. Now, I can be really direct in telling people how I feel, which is projecting in my music. I think sad music can make you happy. I think my [latest] record can do that. I think when people feel something, they think that they’re the only person in the world that feels like that. I think when you’re younger, you feel like you’re the only one who feels like that. Also, people don’t realize you can do dramatic music but you can be funny, too. If you’re depressed and you can joke about it, then you’re working on it. I think when you feel really bad about something, going through a breakup or something horrible is happening, sometimes if you can look back on it and find it funny, it helps. 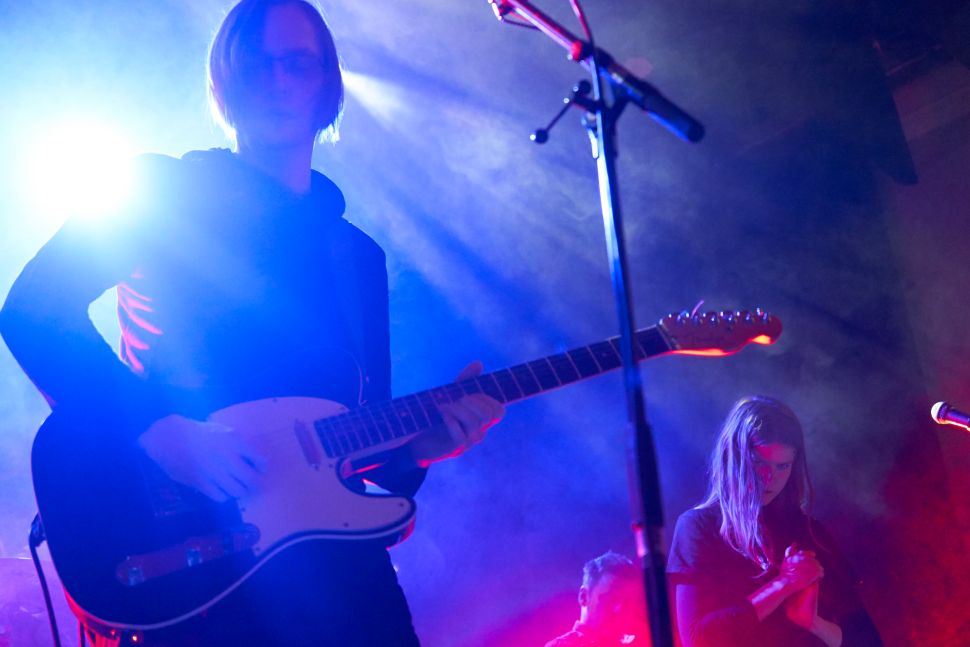