The world watched in horror as ISIS attacked Paris Friday night. When the carnage ended, over 120 people were dead and hundreds more injured. Since that tragic evening, nearly a dozen more have succumbed to their wounds, and the civilized world is in mourning, justifiably outraged.

Meanwhile, at exactly the same day and time, 2,500 miles away, ISIS was murdering men, women and children in the Iraqi town of Sinjar, scene of the infamous Sinjar massacre 15 months earlier, in which 200,000 Yazidis were driven from their homes and 50,000 fled for their lives to the Sinjar Mountains.

According to Matthew Barber, a scholar of Yazidi history at the University of Chicago, as many as 5,000 Yazidi men have been killed by ISIS, and by conservative estimates the same number of Yazidi women and children may have been captured. The United Nations confirmed that 5,000 men have been executed and as many as 7,000 women and girls have been made sex slaves by ISIS. Stories of beheadings, rape and children dying of starvation and dehydration are common among eyewitnesses.

While the West has arguably been reluctant to confront ISIS in a manner befitting a terrorist group that rapes and murders children, burns captives alive and throws homosexuals off of rooftops, Yazidis, with support from Kurdish military groups and US- and British-led coalition air strikes, are fighting to take back their homes and indeed their lives from the Islamic State.

Koly Mato Joko was a 35 year-old father of six whose wife, four sons and two girls are Yazidi refugees living in a tent camp that will not be disclosed for safety reasons. On Friday night he was fighting ISIS in an effort to take back Sinjar. He approached a house to check for ISIS fighters and booby-traps. When he opened the door, a suicide bomber greeted him—detonating his vest and blowing up the home.

The father of six was immediately killed—his body launched far from the burning wreckage.

A few days earlier, I was with Joko’s cousin, Adoul Kejjian. This beautiful young woman was attending an event in suburban Chicago sponsored by the pro-Israel organization StandWithUS, which has been working with a cross-section of religious communities to bring awareness to the plight of the Yazidis.

“I was born in a displaced persons’ camp in Germany to teenage Holocaust survivors. From my earliest recollections, I’ve heard stories of the desperation and the abandonment and the silence of the world, so when I heard the Yezidi story, I could not be silent,” said Peggy Shapiro, Midwest Coordinator for StandWithUs. “The Yezidi plight is the plight of my my people with superficial changes of places, players’ names, and clothing. The desecration of Yezidi religious sites recalls the destruction of Jewish synagogues, the burning of Assyrian churches, and the holiest of Hindu sites which were left in ashes. It is the story of a people under siege.

‘It doesn’t matter if they call themselves ISIS or ISIL, Boko Haram or Hamas, Hezbollah or the Muslim Brotherhood. The enemy is the same and the way to defeat the enemy is to be united. And in our unity we will prevail.’

Ms. Shapiro continued, “It doesn’t matter if they call themselves ISIS or ISIL, Boko Haram or Hamas, Hezbollah or the Muslim Brotherhood. The enemy is the same and the way to defeat the enemy is to be united. And in our unity we will prevail.”

Ms. Kejjian has been leading efforts to rescue her Yazidi community for well over a year. A trained pilot, she has been organizing rescue missions to save men, women and children running from ISIS in northern Iraq.

As the world waited for updates from Paris, Ms. Kejjian would learn that her cousin was dead and his wife and children are in dire straits.

“We all are heartbroken over this. My poor mom has not stopped crying since yesterday. We are very worried about her health. We tried to avoid telling her but we could not contain it with everybody calling to help,” Ms. Kejjian explained to the Salomon Center. “My cousin was fighting for freedom and peace for all of us. He was one of the few thousand people who took the fight to ISIS’s doorstep, not to “contain” but to destroy them. Thanks to the many like him who made the sacrifice, the Yazidi Sinjar City is free now.  But it will be a long time before people can return to their homes and rebuild their lives.”

Ms. Kejjian continued, “We cannot suspend our work because one of my family is dead. We, the Yazidi activists, must continue to raise awareness and funds for the thousands that are displaced.”   Currently tending to her grief-stricken parents, Kejjian plans to resume rescue missions in the immediate future.

The liberation of Sinjar has led to the discovery of multiple mass graves, including one that contained nearly 80 executed Yazidi women. 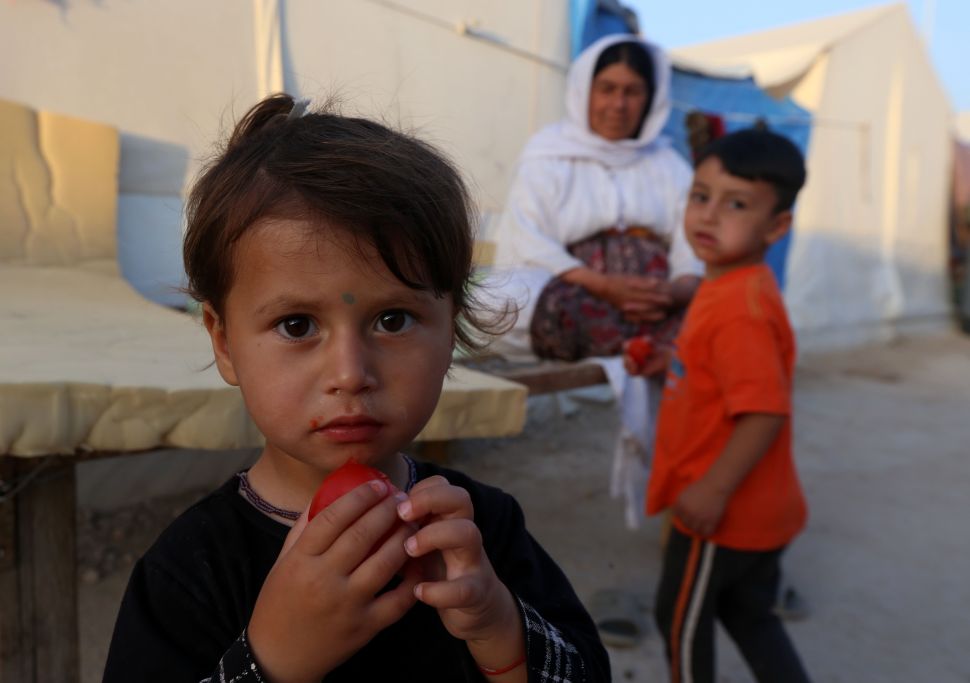