You might pretend that you’ve never worn a Juicy Couture tracksuit (as there was no Instagram around to document Juicy-emblazoned derrieres during their peak), but the Victoria and Albert museum won’t let you forget your fashion faux pas. In the early 2000s, nothing was quite as ubiquitous as that terrycloth precursor to athleisure. Before Lululemon was the official uniform for boutique gym classes and everyday errands, there was Juicy. Now, The Victoria and Albert Museum is hosting this time machine tracksuit, best paired with a Louis Vuitton Stephen Sprouse graffiti purse and pink Uggs.

While it’s more often considered loungewear, the iconic sweatsuit is part of an exhibit called Undressed: The Brief History of Underwear. Within the exhibit, Juicy is represented by a perfectly preppy pink and green number, embroidered with “Love P & G.” It’s a not-so-subtle nod to founders Pamela Skaist-Levy and Gela Nash-Taylor, who launched the brand almost two decades ago.

According to the museum’s website, the show’s aim is to explore “designers who argued for the beauty of the natural body, as well as entrepreneurs, inventors and innovators who have played a critical role in the development of increasingly more effective and comfortable underwear.” Viva La Juicy, the brand’s tagline which is often emblazoned on pink pom pom purses, seems apt, as the former celebrity favorite lives on.

Juicy Couture prides itself on being a “glamorous, irreverent, and fun lifestyle brand for the decidedly fashionable, bringing LA style and attitude to girls all over the world.” While flared sweatpants have been displaced by Lulu leggings in the same way that Paris Hilton has been dethroned by Kim Kardashian, it remains in the collective memory of stylish women who adored their comfortable and cute (at the time) daywear. The fall of Juicy’s track terry was almost as fast as its epic rise to cult “couture.”

Before booking a flight to London, consider breaking out the Juicy cashmere cargoes that you secretly use as sleepwear. Or, if you’re truly ashamed of your past sweatsuit obsession, visit Kohl’s, where the once-glam brand also resides. While all things nostalgia are making a triumphant return, Juicy suits aren’t officially back—but their London appearance is the perfect excuse to hop across the pond. 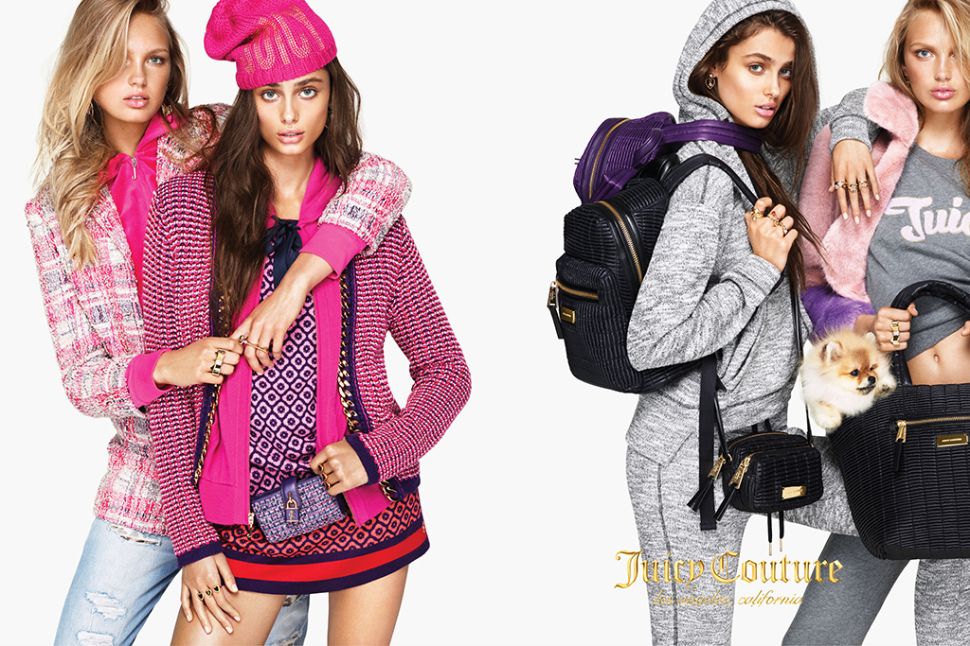