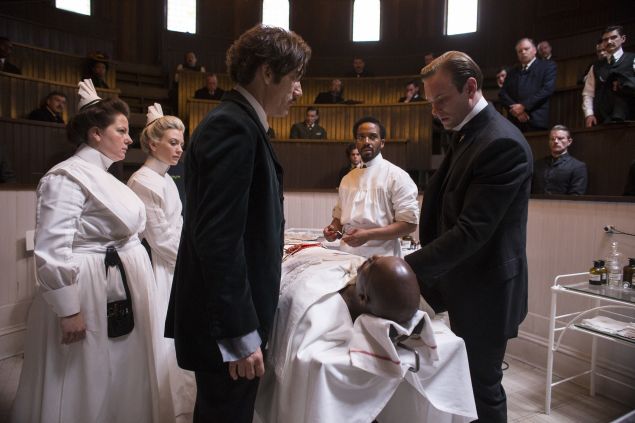 How do you like your horror? Do you like the kind of visceral gore that only an exposed brain complemented by a series of clamps hanging off the dangling skin off the a skull-less man’s brow? Great. Do you prefer the kind of horror that gnaws at your soul rather insteading of hitting your gag reflex? Wonderful, cause Gallinger’s putting his theoretical eugenics into real world practice by performing involuntary sterilizations on the young boys at “the idiot house” out on Randall’s Island. What about a scenario that plays to fears specific to women in this, or any era? Perfect, Barrow cruelly and coldly rejects his wife’s sexual advances as she dolls herself up in her best silks and satins in an attempt to entice her husband. Mrs. Barrow is left on the couch feeling ridiculous and deflated while Barrow flees from her as if she was covered in running sores. Barrow tells his wife he has “business” but that business entails shopping for an apartment where he intends to live with the much younger woman for which he plans on leaving his wife, once he buys Junia out of ping Wu’s sexual slavery.

Jesus, is anyone having a good time on this show? Well, Bertie Chickering manages to have a little manic pixie adventure with Genevieve by breaking into an office to steal journals on radiation therapy. Although the two are adorable together, it’s not all fun and games since Bertie is gathering research on what were still experimental cancer treatments. It turned out that his mom was just diagnosed with the disease herself Still, she’s not so infirmed that she can’t enjoy a little Borcht Belt humor at the dinner table when Genevieve tells a few zingers to soften the reveal to Bertie’s parents that she is indeed Jewish.

Nurse Elkins is having far and away the best time out of everyone in this grim, sad crapsack world. Yeah, she’s still tasked with regularly checking Thack for track marks. However, now she’s pretty much the de facto doctor for Ping’s sex workers after Dr. Mays lit himself up like a Christmas tree last episode. (RIP, you jovial idiot.) Anyway, in the middle of giving a sex worker named Lin Lin a clean bill of health, the working girl imparts a valuable piece of advice.

“When he’s in my hand I can control him,” Lin Lin explains. “I can get anything I want.”

Lucy seems to be taking that wisdom to heart now that she’s actually entertaining amateur pornographer Henry’s advances, despite the fact that she previously blew him off because he already stormed through the nursing staff like “Grant through Richmond.” If anything, this auspicious flirtation with Lucy is taking Henry’s mind off the fact that the massive investment he secretly made into subway construction with family money pretty much went up in flames along with the dynamite explosion that landed over 100 construction company workers into triage at The Knick.

While performing surgery on the construction workers, Thack manages to innovate a technique where he emplys electricity to locate metal lodged deep into a patient. He also employs electricity to locate the area of the brain where he believes addiction is centralized. His demonstration of pricking and prodding a skull-less morphine addict’s cortex is met with pomp and applause in the surgical theater. However, Thack renders the poor patient lobotomized in the course of removing that part of the brain.

Maybe Thack would be better served worrying about his own addiction. After all, his former flame Abigail is absolutely appalled at how casually Thack just taps out a little coke/heroin cocktail for an afternoon bump. Surprisingly, when her back is turned, Thack does actually honor her request. Since curing her syphilis, Thack seems to be falling back in love with his ex, and even kisses her as he walks out the door, out of habit.

I’m not sure Algie is falling back in love with his wife Opal, but he has certainly warmed to her presence, or at least to her influence.

Cornelia is still embroiled in the world’s most tedious murder investigation. It’s so tedious, in fact, that I’m starting to wonder why she left planning charity balls behind. Still, she does manage to catch a break and learn that Inspector Speight had discovered a boat carrying passengers infected with bubonic plague before he was killed. Progress! Finally! 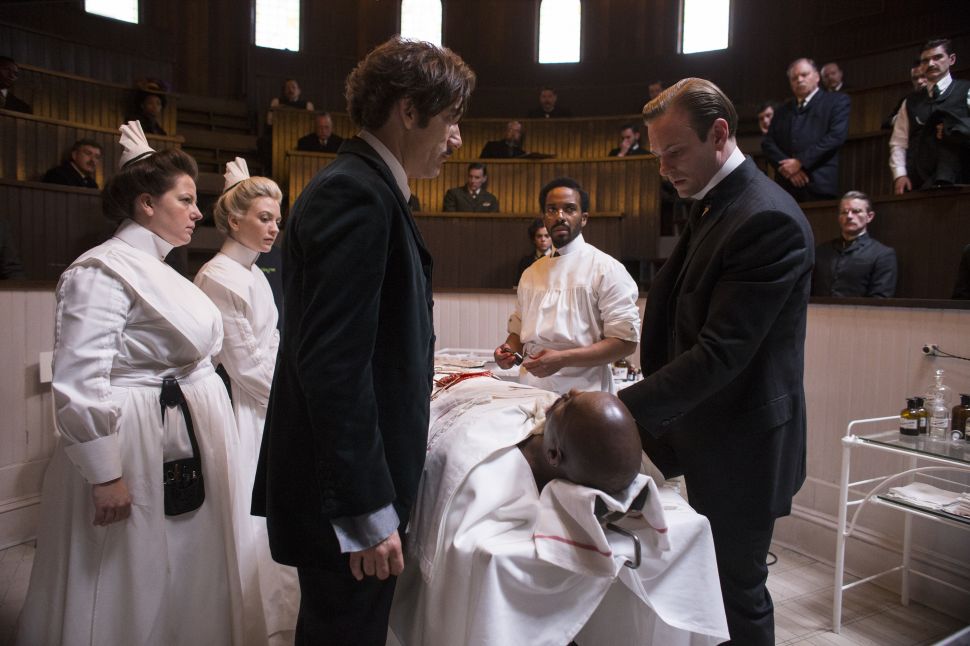