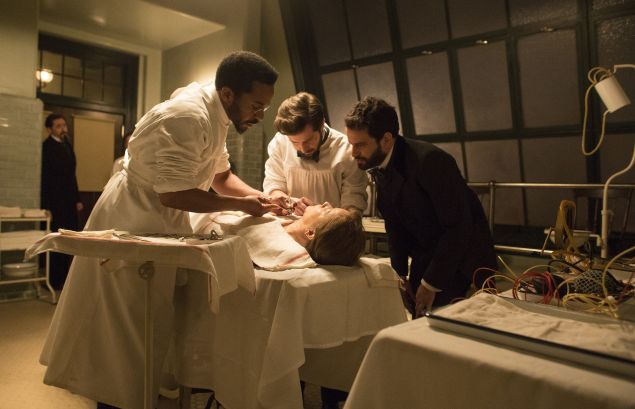 What can trigger Dr. Thackery’s savior complex more than one vulnerable and damaged woman in need of medical assistance? How about two vulnerable and damaged women in need of medical assistance? Enter Nika and Zoya, a set of conjoined twins essentially enslaved by sideshow huckster Lester Brockhurst. Thack stumbled upon them after being taken in by a hypnosis demonstration, or more specifically, he saw an obvious audience plant become terrified by a kitten and assumed he could hypnotize the addiction right out of his patients. God bless Thack for not being discouraged after last week’s fuck up where he essentially lobotomized a man after hacking out the chunk of brain he thought was responsible for addiction. And it’s not that lightbulb going off atop Thack’s head is entirely misguided. Over a hundred years later, people pay good money to have their cravings for cigarettes hypnotized away, to varying results. Still, it looks like Thack is going to have better luck freeing these twins from each other and their slimy oppressor then he will freeing the masses from the shackles of habitual substance abuse.

It seems like some of Thack’s professional recklessness has rubbed off on Bertie as he enlisted Algie in trying to pull off a very experimental and very risky and off the books surgery in order to cure his mom’s esophageal cancer. Given the secret clinic Algie used to run in The Knick’s basement, Bertie thought he’d be the perfect accomplice to perform the unsanctioned surgery in secret at Mt. Sinai. Of course, the procedure went about as well as expected and was only getting worse when an irate Dr. Zinberg crashes the party. Despite his rage, Zinberg jumps into the fray and tries to save Bertie’s mom, but to no avail.

On top of the loss of his mom, Bertie’s secret surgery essentially forces him to resign from Mt. Sinai and come crawling back to The Knick, a hospital that routinely hosts such renegade surgical shenanigans. On the plus side, Genevieve’s roommate is going out of town, so she and Bertie are going to get to have sex. Silver linings, y’all!

Speaking of sex, Lucy took Lin-Lin’s advice and took matters into her own hands. And by that, we mean that she took Henry’s member into her hand when she demanded to know why he hadn’t purchased her an invitation to the hospital fundraising ball. As per her missive with Harriet, Lucy is done with her formerly passive role of being used up and discarded by men, so she’s being proactive in getting what she thinks she deserves. On that note, Barrow’s paramour Junia is lightyears ahead of her. When surveying the spacious love next Barrow purchased for the two of them, she responds with a perfunctory “It’s beautiful” before deflating that sentiment with “Would have been nice to be able to see the park.” Daaaaaaamn, girl.

As for Gallinger, he isn’t so much inflicting horror this week, but enduring it as the demented Dr. Cotton, played by a mustachioed John Hodgman,  shows up to his house for dinner. You’ll recall that Dr. Cotton is the butcher who treated Gallinger’s wife Eleanor’s nervous breakdown by removing all of her teeth. Gallinger now has the distinct pleasure of sitting at the dinner table while listening to man who disfigured his wife brag about curing a hypochondriac by removing his organs until he didn’t have many left. Eleanor’s sister is just as contentious as Gallinger, and soon Dr. Cotton wisely excuses himself from the table on account of feeling ill. Once again, Gallinger and Eleanor’s sister seem of like mind, while the fragile Eleanor is completely oblivious. Sure, Gallinger is on (rightfully) on edge at the dinner with Dr. Cotton and he’s probably going to throw a fit when he finds out that Algie is asking Thack to petitioning The Knick’s board to let him perform his revolutionary hernia procedure on a civil rights leader, but at least he wasn’t doing anything outright horrific this episode. No one was sterilized against their will and he wasn’t threatening to beat up any immigrant children. Sure, the humanity bar is set pretty low for Galliner, but still.

Cornelia is still investigating Speight’s death and she found out that ZZZZZzzzzzzzzzzzz.

Also, Cleary was finally successful in his plea in rescuing Harriet from the shady fallen women’s home. They’re gonna be roommate and he’s gonna hang a curtain up to afford her some privacy and make any other arrangement she needs. Oh, to be a fly on that wall. Or an executive producer on that spin-off show.

The episode ends with Abigail telling Thack she can’t exist in the kind of emotional limbo where he comes to her apartment just to talk to her after he’s been rutting in an alley with a dancehall girl, or with whoever else he’s been carousing. There relationship hinges on a shared intimacy and familiarity, but was ultimately undefined, at least until Thack responded to her complaints by holding her tight and kissing her passionately. Thack seems like he’s all in. But for how long? 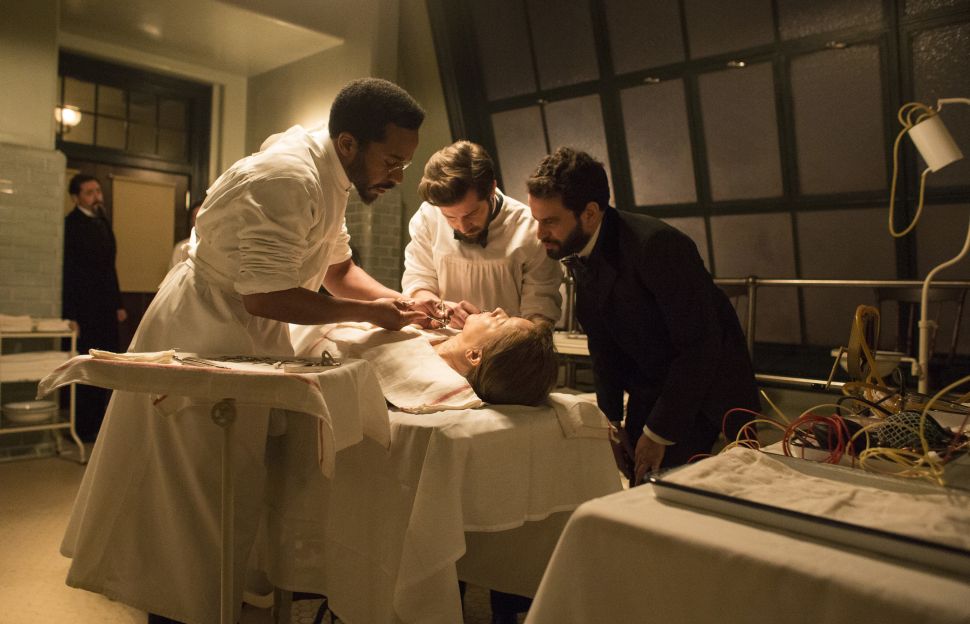