This week’s episode opens with a dirty trick, a repetition of Matt and his vegetative wife Mary’s daily life, listening to the same song in the morning, going through the same routine of dressing and heading to church and then the store, eating dinner (a burrito for him, feeding tube slurry for her) and then settling down to sleep, which Matt video records just in case Mary should snap out of her state in the middle of the night. It’s a sweet and sad sequence that becomes really, crushingly sad when we find out that it’s not just that Matt’s in some kind of a rut, he’s deliberately reliving—down to the smallest detail—the day that Mary suddenly, and briefly, awoke, in hopes she might wake up again.

So, yeah—Matt Jamison is literally living the most cliché definition of insanity.

It says a lot that Matt Jamison is the strangest part of The Leftovers. The character is all ears and nose and Christopher Eccleston plays the part with a gawky, earnest intensity, looking at times like a John Kricfalusi drawing of a witless, uptight middle-aged suburbanite in a bad sweater. Before joining The Leftovers Eccleston was the last person to play Dr. Who before that became a thing millions of people actually cared about, and he brings an alien quality to Matt, who has a tendency to look at the other characters in any given scene as though from the remove of an alternate dimension where human interaction is governed by an entirely different set of rules. His attempts at dealing with the Guilty Remnant in season one were kind of noble but mostly misguided, his devotion to his vegetative wife sweet but maybe bordering on a kind of horrific denial of her actual situation.

In the theoretical theologically approved version of The Leftovers, Matt is the hero. He might not be the only character in the show driven by optimism, hope, and faith, but he’s the only character who lives with these things right out in the open, right on the surface. He’s kind and honest and helpful. In the version of the show we’re (thankfully) getting, it sometimes seems like Matt might be dangerously insane, and also he’s often a little annoying, because it’s more fun to watch characters who are scared things are going to suck flail than it is a character who is sure everything is going to be fine nod and keep moving forward.

I think we’re supposed to question whether Mary ever woke up and spent a lucid day with Matt, just like we’re supposed to question whether Kevin is actually in communication with ghosts and if various other character’s have special healing powers or whatever, so the scene where the evil alcoholic stepdad from Boyhood tells him that Mary is pregnant is genuinely creepy. Matt is overjoyed, totally ignoring the warning that a forty year old woman in a persistent vegetative state has a 90% chance of miscarrying and not catching on to the idea that people are going to assume that he had sex with his wife sans consent until the evil stepdad makes it very clear that he does in fact think this is what happened. Matt couldn’t care less. He’s sure that conceiving this child was the reason Mary woke up, that this is proof of the power of Miracle, Texas, and he wants his co-pay back before he gets back to town.

And of course of anyone in any television show that’s ever existed it’s Matt Jamison, high on miracles en route to Miracle, who gets robbed trying to help a stranded motorist, the wristbands that grant him and Mary stripped away by a desperate father and son.

Denied access to town, Matt and Mary’s journey through the pilgrim camp outside the gate to Miracle is freaky as hell. Topless women walking across the backs of shirtless men, drugs and booze and bad beards and hazy desperation, a loincloth cowboy and a disheveled sad sack desperate for someone to whack him in the spine with an oar, a woman who might be what’s left of Brett Butler (I think that’s her? Right? The camera kind of zooms towards her the first time she’s seen, as though saying ‘look who it is!’) all topped off by a naked man in stocks atop a taco truck and a shrewish sort of guard who goads Matt to climb up and set the guy free by taking his place.

Another episode highlight is Matt’s faceoff with John Murphy, called in by Kevin to throw his weight around and get Matt and Mary back home. When John finds out that Mary is pregnant, he warns Matt that he’d better be ready to lie about how she got that way once people start asking questions, and it seems possible that John very much believes that Matt is telling the truth. For a moment Matt is willing to go along with the lie, but then he just can’t help himself, he has to ask John why he’s so damaged, I guess unaware that damaged people don’t really love that question, getting him and Mary kicked out into the camp once again.

Yeah, Matt Jamison is annoying. He’s totally guileless, he can’t shut up, he ends up needing to get rescued by his sister, Nora, who smuggles him and Mary back into Miracle hidden in the trunk of her car. When they come across an accident on the road—a car flipped over, apparently having struck a goat—the driver, dead at the scene, is the very same man who earlier robbed Matt and Mary of their wristbands. Matt rushes to strip his band off the dead man’s wrist only to spot the man’s son, relatively unharmed. The boy offer’s to return his purloined band we enter the last five minutes of the episode, which cements Matt Jamison as a character I will feel everlasting love and affection for, with a firm place in my personal pantheon of all-time great television characters.

Matt decides to leave. He asks Nora to take care of Mary and kisses her goodbye, he brings the orphaned son of his attacker to John Murphy and makes it clear he’ll never back down from believing that Mary woke up, that miracles take place in Miracle, and he goes back to the camp and takes his place in the fucking stocks on top of that taco truck because, as he says, ‘It’s my turn.’

Matt Jamison would be the hero of the theoretical theologically approved version of The Leftovers, and yes he’s gawky and guileless and possibly insane in this version of the show but as it turns out he’s the hero here, too. Maybe not the protagonist, maybe not the most compelling character, but the hero. Matt’s a man who won’t shut up, who won’t back down, who isn’t just fighting for a better future for his family but a better present, too. He’s not afraid to look crazy, he’s willing to suffer. He’s willing to work. If he’s crazy, we should all be. We’d be better off. 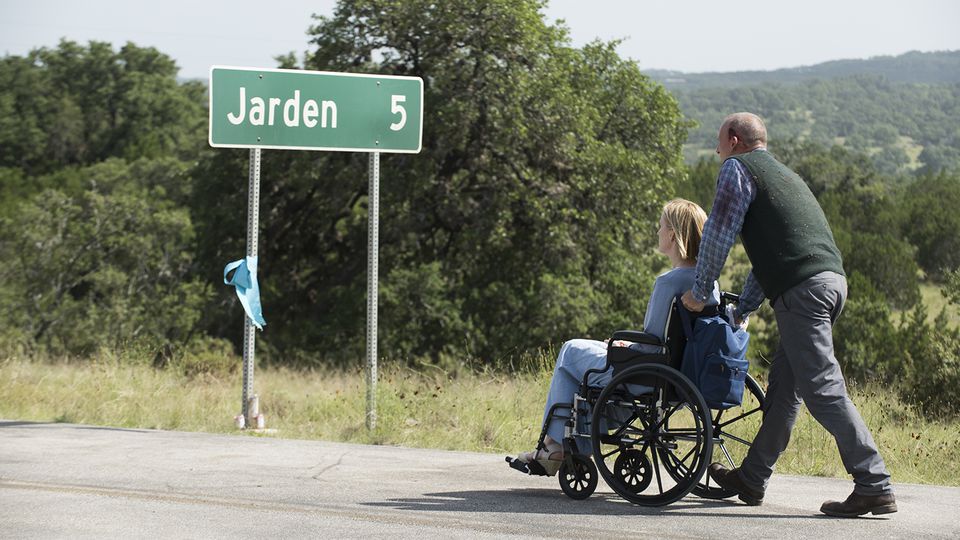