In a television landscape packed with difficult men, Kevin Garvey stands out as the most difficult by an enormous margin. Dude is hard to spend time with. And it’s weird, because he’s better person, more considerate and far more kind, than Don Draper or Tony Soprano or Walter White, but for a multitude of reasons those guys are way more fun to watch, and much easier to root for.

Kevin lacks the charisma those other dudes ooze, and lets give Justin Theroux credit for that, as he’s a naturally charismatic guy. In fact, aside from here he’s traded on having natural charisma in every role I can remember seeing him play. The character is just so wounded and raw and kind of…weak, I guess. Theroux plays it well. But it’s hard to watch.

But he’s the first thing we see this week, waking handcuffed to the bed and the news, delivered by Patti the Possible Ghost, that Nora has left him, and that he’s about to have a hard day.

This episode pretty much boils down to Kevin being given two different explanations for Patti the Possible Ghost, one from Michael Murphy’s creepy grandfather (whose name I can’t find online anywhere) and the other from ex-wife, ex-psychiatrist Laurie. Creepy grandpa says Patti is ‘a most powerful adversary’ that can only be defeated on her own turf, which means piercing the veil between life and death. Laurie says Patti is a hallucination that Kevin is experiencing due to a psychotic breakdown triggered by a combination of PTSD and genetics. Creepy Grandpa is a pedophile that lives in a shack filled with an overabundance of light bulbs and animal corpses, who cites the man living atop a pillar downtown as example of his methods success; Laurie is fresh out of a cult and admits that she drove her son away by forcing him to pretend to have magical powers.

Poor Kevin, Patti the Possible Ghost might be the most stable and reasonable person he knows.

But he ends up going with Creepy Grandpa, who gives Kevin a glass of poison to drink, promises to revive him with a shot of Epinephrine, and then promptly blows his brains out as soon as Kevin starts bucking and seizing on the floor of his shack.

That Kevin chooses Creepy Grandpa and the cup of poison (even Patti the Possible Ghost tells him it’s a bad idea, kind of. She seems confused, in the moment) is pretty interesting in that what he’s doing sort of mirrors the big ‘embrace and live within the various inexplicable mysteries of life’ theme of The Leftovers and shows exactly how dangerous this can be. It’s an interesting counter-point to Matt’s big episode from a few weeks ago. Then, Matt fully bought into seemingly impossible and mystical circumstances in his commitment to the idea that comatose Mary miraculously woke up long enough to conceive a child with him, and in the end this gives Matt the strength and purpose.

Is the difference that Matt gives in and admits he has no control over what’s going to happen—he began that episode trying to trick whatever magic might exist in the world into working for him and ended it deciding to wait things out—and Kevin can’t let go of the notion that there’s some action he can take to carve a more palatable existence out of chaos?

I’m going to say that’s the point, and that I wish I identified more with Matt then Kevin.

A few other things to highlight this week—Margaret Qualley, who plays Jill, is so good in this show and gets overshadowed by the adults, who get more to do every week. Hopefully she’ll get an episode all her own before the season is over. John Murphy’s declaration that asking everyone in town to submit their handprint to his database gives “the innocent men the opportunity to get on the right list” is super chilling. You can complain that ‘Where is My Mind’ is a massively overused song across television and movies but it’s always stirring and works well here. Patti the Possible Ghost hanging a lantern on Kevin taking the advice of a mystical African-American man living in the woods being ‘borderline racist’ would probably inspire a lot of think-pieces in a world where The Leftovers had the audience it deserves. When did we start calling them think-pieces instead of editorials?

And will this be a better show if Kevin is actually dead? 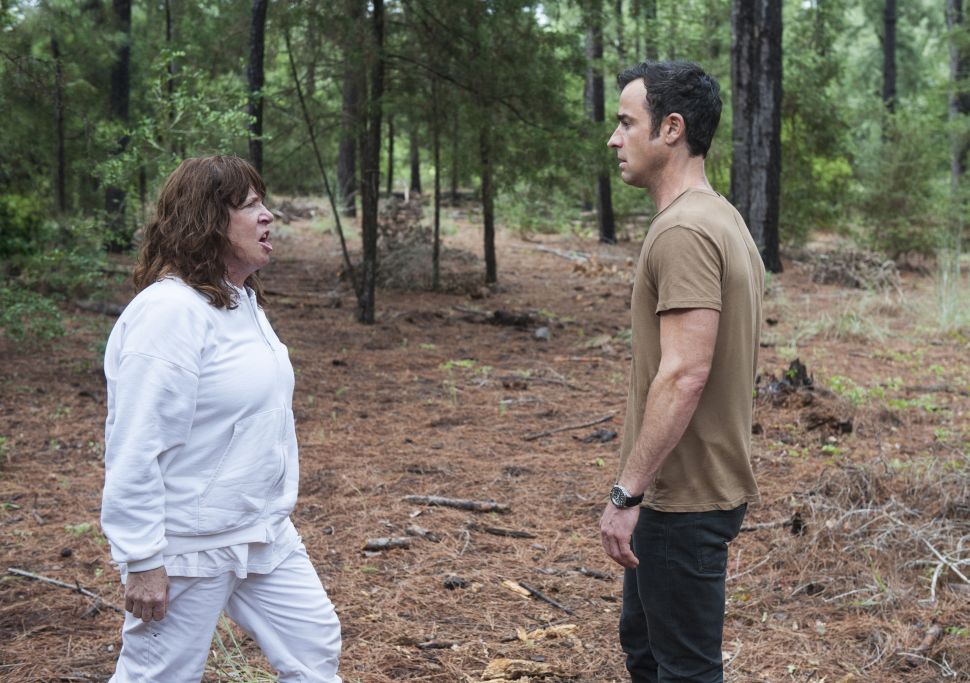