I had a feeling that after last week’s terrific episode, which saw Kevin Garvey skip across the border between life, death, and nightmare like a flat stone and ended with him bursting up from a shallow grave, that this week would swerve and deal with something else completely. Well, not a feeling like a sixth sense, I’m not psychic, more like I figured this is what would happen because it’s how the show has been structured all year.

What if my mutant power were to predict the future, but limited to episodes of The Leftovers? Would the X-Men even bother with me? And what if the show got cancelled? Maybe I’d continue to predict what future episodes would have been had it continued…in effect making my mutant power fan fiction. That could work, actually…Fifty Shades of Grey started off fan fiction, right? And E.L. James is a millionaire now.

I’ve always thought being a millionaire sounded like fun.

Anyway, we spend this week primarily with Meg (Liv Tyler), missing all season aside from a brief cameo a few weeks ago where she raped and threatened Tommy. We first see her tonight in a flashback set the day before the Sudden Departure, blasting rails in the bathroom of some posh restaurant to deal with her mother and talk of money/responsibility/her upcoming nuptials. The scene ends with Meg’s mother dead or dying and flashes forward to before the beginning of season two, Meg and a boyfriend (is this the same dude she was engaged to in season one? I don’t remember) travelling into Miracle/Jarden for some sightseeing and a visit to psychic Eddie Winslow, whom Meg is hoping can connect her with her mother.

Eddie Winslow warns Meg that whatever her mother’s ghost has to say will probably amount to “stupid shit” and disappoint her when it doesn’t actually make her feel better but Meg pushes anyway, cut outside to Meg declaring him a total phony. Before splitting town she shares a baby carrot and a touch of nihilism with Evie Murphy, and spits on the ground before climbing back on the bus to leave town.

Cut to the relative present, Meg and the GR hijacking a school bus and terrifying some children with a hand grenade. We get some clarification about her role in the GR—she’s in a leadership position, but a bit of a rebel, she speaks when she wants, doesn’t smoke, wears a slightly frilly all-white garment, and thinks the GR needs to step up its game. There’s mention that she’s stockpiling plastic explosives and that this material might play a role in whatever she’s planning for the upcoming Sudden Departure anniversary. She’s warned that violence is weakness and disagrees.

Liv Tyler is an interesting actress, which I say because I’m not sure if she’s good or just compelling. She’s charming. The word ‘vacuous’ comes to mind, but that’s not really the word I want. I don’t think she’s dumb or mindless, I mean ‘empty,’ which also sounds like an insult but I totally don’t mean that way—her character is supposed to be empty, or else her character desires emptiness, and there’s something very flat about Tyler’s eyes that works well, but makes me wonder sometimes if she’s making interesting choices as an actress or just really well cast. She’s great, let’s move on.

Meg visits Tommy, who continues to promote himself as a faith healer to steal away members of the GR. She shakes his confidence by telling him that while he only claims to have the ability to take people’s pain away, she actually can, which results in Tommy fighting with his mother and running off to find her. Through talking with Tommy, Meg finds out, and is delighted to hear, that his father and sister are now living in Miracle/Jarden and decides to take him along on a trip down there to check out whatever it is she has planned for the town.

I don’t know why I can’t give Liv Tyler the benefit of the doubt about making interesting choices. I can. I am. Look, the music video for ‘Crazy’ came out when I was thirteen years old, I’ll go to my grave unable to string two thoughts about Liv Tyler together in a way that doesn’t make me feel like I’m talking about something incredibly personal.

She’s really good in the scene where she runs into Matt in the pilgrim camp outside town. Matt assumes she’s left the GR and tells her how happy he is to see her, that he remembers her mother’s death, and apologizes for trying to use the memory of her mother to get her to quit the GR in season one. He tells her he wanted to get her experiencing emotions again and apologizes “for being your living reminder,” and we see every emotion play over Meg’s face before she asks him why the pilgrims are sitting around waiting to get into Jarden when it’s just across the bridge and supplies the answer, too—“You’re waiting for me.”

The GR, and Meg especially, claim to be living reminders of the Departure, but how exactly is terrorizing kids with a grenade a reminder of that, specifically? How is the sublimation of emotion supposed to remind people of something really sad? They don’t seem as interested in reminding people—people don’t need reminding anyway—as much as they seem angry that anyone can function, can walk around pretending the departure didn’t happen.  This is where that emptiness Liv Tyler has pays off, I think. Maybe her character is driven by all these contradictions, but instead of that turning her into some kind of twitchy lunatic she’s a spooky void who let ideology take the wheel only to double down instead of thinking twice when ideology proved incapable of getting her anywhere worth being.

As to whatever everyone is supposedly waiting for Meg to do, all we know is that it involves a shitty camper loaded with Evie Murphy and her missing friends, now GR members themselves. I bet it’s going to be super fucked up, and that we won’t find out next week. 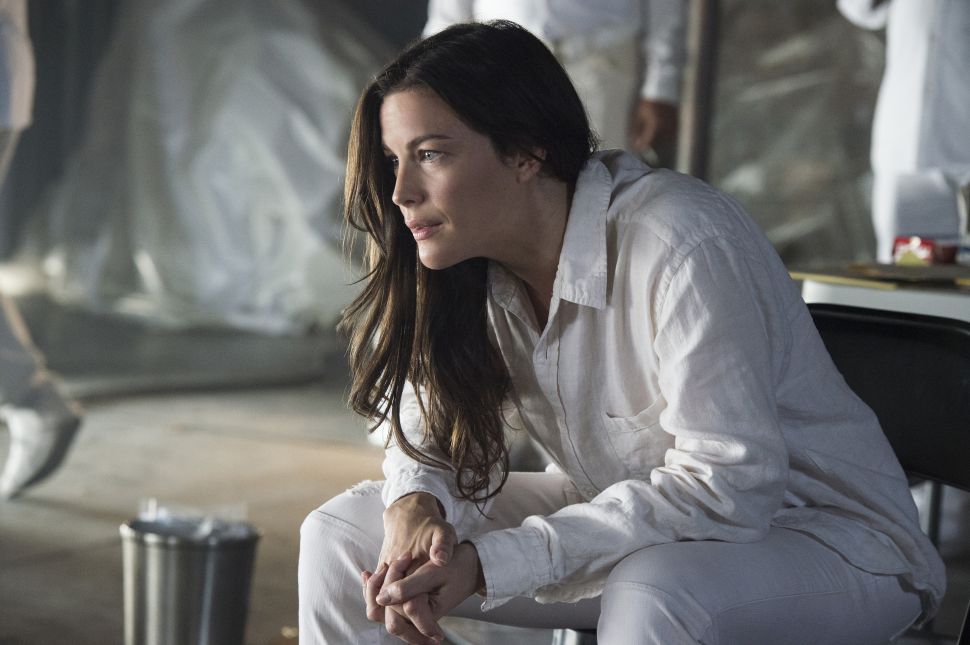