ATLANTIC CITY – The fat get fatter, or so it appeared at this year’s annual League of Municipalities Conference, that alcohol-soaked food and gossip-fest featuring gaudy parties in crumbling casinos thrown in favor of lawmakers in a stagnant statehouse at a time when New Jersey poverty is the highest it’s been in 50 years and the state Transportation Trust Fund (TTF) a shell of its former self.

Scampering from event to event, three men running for governor of New Jersey in 2017 – and state senator Ray Lesniak (D-20), also a candidate – sought to curry favor with that handful of Democratic Party pooh-bahs occasionally lit up amid zigzagging discotheque lighting and the cacophony of synthesizer dance music.

Chairman of the largest Democratic County, Essex County Chief Leroy Jones clearly commanded a lot of attention as he sauntered from one party to the next, the trail of guv hopefuls kicking up boardwalk dust around him.

“I hear the next James Bond is going to be played by a brother,” cracked the chairman, appearing in Daniel Craig-style turtle neck, his wife Jacqueline at his side.

Although there were murmurs in Mur Mur about north and south tensions developing at the League this year, they certainly were not on display in this exchange between Essex County Clerk Chris Durkin, left, and Assemblyman Troy Singleton (D-7).

Part of it included a steadier than last year suggestion that U.S. Senator Cory Booker (D-NJ), in the event Hillary Clinton doesn’t tap him for VP and he gets bored in the minority party in the federal upper chamber, could jump into the governor’s contest out of Essex and, in the words of George Norcross III, “clear the field.”

What does Jones think about that?

He flashed a grin at the question seconds before getting engulfed by the next horde of guv operatives.

Honored by the Laborers and Operating engineers in the Borgata’s Mur Mur Lounge tonight, the chairman was coy throughout, never indicating he might favor one gubernatorial candidate over the other as he plays with the fate of the state, his selection of who gets the line in population-heavy Essex a precursor to who gets to be governor.

There were other players at work, and other dynamics.

There was a very visible and active Al Abdel-aziz out of Paterson, feverishly politicking at the Borgata in advance of next year’s Ward race where he hopes to upend incumbent Councilman Andre Sayegh. Abdel-aziz could be seen in Mur Mur at one point cheek to cheek with Paterson Mayor Jose “Joey” Torres, just below a throbbing stage where Newark Mayor Ras Baraka and his team stood motionless in BlackBerry mode.

Then there was Monmouth County, scene earlier this month of a Democratic victory in LD11.

Now a lot of people and political action committees will want to take credit for the victory there of two wet-behind-the-ears assemblypeople-elect.

But in a demonstration of how he turned his relentless networking skills into political viability in his home county, Monmouth

“He’s worked it very hard, and Monmouth will eventually be a Democratic county because of Vin Gopal,” said Fulop.

So did Assemblyman Gary Schaer (D-36).

Fanwood Mayor Collen Mahr was in the room.

Perth Amboy City Attorney Arlene Quinones-Perez was in the room, along with SEIU local vice prez Milly Silva and Lizette Delgado Polcano, the vice chair of the Democratic State Committee.

The place was simply packed, and it was a big room, too, at Harrah’s, not a closet.

As raucous a celebration as it was, though, that Essex factor lingered, to accompany the general death knell vibe of the Republican Party.

On the floor of the casino at the Borgata, powerful Essex County Executive Joe DiVincenzo and his chief-of-staff, a vastly slimmed down Phil Alagia, stood in a catch basin of politics that included former U.S. Senator Bob Torricelli, Booker Chief-of-staff Mo Butler, and Essex County Freeholder Brendan Gill.

Some buzz persists about DiVincenzo getting in the gubernatorial dance if Booker doesn’t, and beginning the game with Essex County – or a big piece of it.

Gill might have something to say about that, if it ever got to that point. He’s the chief political strategist in the Murphy camp, and might have the potential to pull west Essex support for the ambassador and the likes of state Senator Dick Codey (D-27) – said to be a Murphy fan – and state Senator Ronald L. Rice (d-28), an inveterate Codey fan.

Baraka and Fulop are rock solid, too.

But in any case, Torrcielli and DiVincenzo made nice amid the mindless dinging bells of one arm bandits. Remember, DiVincenzo slapped at the Torch earlier this year, calling the former senator disrespectful for appearing to campaign for a seat still occupied by indicted U.S. Senator Bob Menendez (D-N.J.)

Booker mastermind Mark Matzen, newly boosted by that other campaign night Democratic Party surprise in LD11 – the victory of Assemblyman-elect Andrew Zwicker – could be seen huddled up with Schaer and Torricelli in the vicinity of the Essex crowd.

“It’s early,” he said, when asked if he has a gubernatorial pick at this time.

The hopeful scene outside of Harrah’s.

All he knows is he’s not for Donald Trump for president.

“I’m going to build my own wall in Passaic,” Blanco cracked, “to keep Trump out.”

“I’m with Chairman Leroy Jones,” Luciano told PolitickerNJ when asked if he supports anyone in particular for governor.

It was a politic answer.

Fulop and DiVincenzo approach each other in Mur Mur. 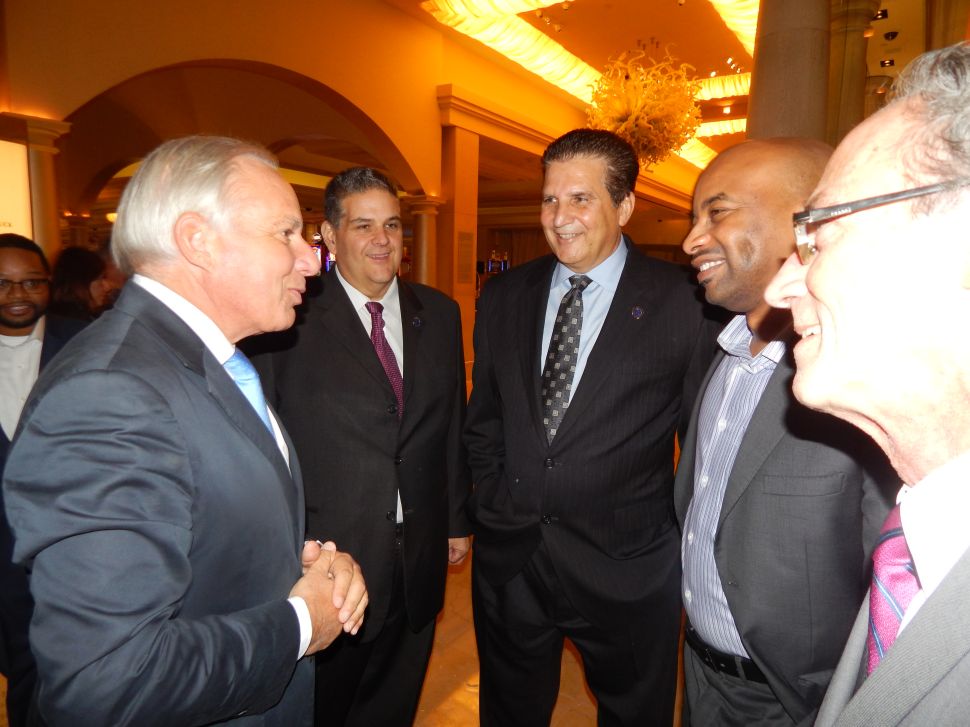