Frank Stella burst onto the New York art scene in the late 1950s. Barely 23, he held his first solo show in 1960, at the prestigious Leo Castelli Gallery. It is something of an understatement to say that the exhibition caused a stir. At the time, no one had seen anything quite like the imposing, nearly all black paintings he introduced, whose monochromatic surfaces are relieved only by spare networks of thin parallel lines, like pinstripes in pale tones that prove to be unpainted, raw canvas.

Bold and rigorous, these so-called “Black Paintings” (1958-1960) are widely regarded as seminal works of what became known as Minimalism. Mr. Stella, however, was indifferent to the reductive precepts of the Minimalists. In subsequent years, he galvanized the art world as an innovative shapeshifter. He changed his style at a breathtaking pace from one year to the next. Throughout the 1960s and ’70s, each new line of Stellas was eagerly anticipated, like the latest model Chevy. Practically everyone in the art world discussed the new works, and anyone who could afford it had to have one. The “Black Paintings” were followed by shaped canvases, the “Irregular Polygon” series, the “Protractor” series, the “Exotic Birds,” the “Moby Dick” series, the “Shards and Scraps” series, and numerous others, as the artist moved ever faster toward the direction of what might be termed Maximalism.

As evidenced by the often spectacular Frank Stella retrospective currently on view at the Whitney Museum of American Art, the artist early on achieved a rather exalted position as the principal heir to the heroic scale and grand gestures of Abstract Expressionism. The sheer volume of his output, produced over the past 60 years, is staggering. The tumultuous evolution of his work, and wildly inventive experiments with materials, are well represented in this dense and intense show.

The first comprehensive Frank Stella survey in the United States since 1987, and the first solo exhibition devoted to a living artist at the Whitney’s new downtown space, the exhibition was organized by Michael Auping, chief curator of the Modern Art Museum of Fort Worth, in association with Whitney director Adam D. Weinberg. Containing some 100 paintings, three-dimensional pieces, photographs and works on paper, the show remains on view in New York through February 7, 2016, before traveling to the Modern Art Museum of Fort Worth (April 17-September 4, 2016), and the de Young Museum, San Francisco (November 5, 2016-February 26, 2017).

Filling the cavernous space of the Whitney’s fifth floor, the works are arranged non-chronologically. The situation makes for a visually engaging installation, but surely presents a frustrating challenge to those unfamiliar with the dramatic evolution of Mr. Stella’s art.

Born in Malden, Mass., in 1936, Mr. Stella attended Phillips Academy, and then Princeton University, where he studied art history and painting. He moved to New York City immediately after graduating in 1958, and almost instantly launched what was to become one of the most successful careers in the history of postwar American art. His is an exceedingly tough act for any young artist to follow.

Major examples from most periods in Mr. Stella’s long career are here, many on loan from prominent public and private collections. The Marriage of Reason and Squalor II (1959), loaned by the Museum of Modern Art, for instance, is a superlative representative of the “Black Paintings.” Among the early shaped canvases, Plant City (1963), a large octagram, or an eight-pointed gold star, painted with zinc chromate, is truly dazzling. And the “Irregular Polygons,” with their Day-Glo colors and elegant geometry, such as Conway I and Chocorua IV (both 1966), and “Protractor” pieces, including the mural-size Harran II (1967), are among the show’s standouts.

With a self-imposed mandate to free painting from the confines of two dimensions and release it into a three-dimensional realm, Mr. Stella changed gears in the early 1970s to produce relief-like painted constructions made out of aluminum or wood. In works such as Grajau I (1975), the brightly colored wedges and diamond-like facets correspond to his earlier efforts in some ways; but the artist’s ambition here was to radically recalibrate the parameters of painting, and redefine what a painting is, or could be.

Mr. Stella began to go over the top—perhaps intentionally—in the late 1970s, with the “Exotic Birds,” and other series featuring wildly baroque abstract compositions, with curvilinear cutout shapes in aluminum, sometimes protruding several feet into the gallery space. Often in enormous scale, some over 12 feet high or wide, these bombastic objects are sometimes decorated with graffiti-like scrawls in gaudy colors and glitter.

Some experts place the series in context with the Pattern and Decoration movement of the period. They also correspond to the Neo-Expressionist trends of the avant-garde of the 1980s. As cited in the show’s excellent catalogue, Julian Schnabel, for instance, has acknowledged the influence of Mr. Stella’s “Exotic Birds” series on his own “broken plate paintings” at the time.

Always a restless innovator, Mr. Stella seems to have consciously aimed to blow away his audiences perennially with each new grandiose visual statement. The revelations in this show for me, however, are the more modest pieces from the late 1970s on. These graceful, smaller gestures include the maquettes for large-scale works, and the easy, casual drawing studies for monumental pieces.

The wall of six maquettes for the “Exotic Birds” series, for instance, is truly arresting. These wistful and humorous constructions, averaging about 2 by 2 feet, feature sensuous configurations of painted metal cutouts and wire mesh. The Pop Art freshness and warmth of found-metal bits, with fragments of product signage and logos visible, add to each work’s liveliness. By contrast, the massive pieces they relate to, several of which are on view nearby, seem relatively cold and impersonal, lacking the graceful charm found in each of the smaller pieces.

​Similarly, the diminutive, recent freestanding sculptures, Circus of Pure Feeling for Malevich, 4 Square Circus, 16 parts (2009) are whimsical and hyperactive constructions of wires and tubing. Arranged in groups on four square plywood tables supported by sawhorses, the 16 pieces appear as a playful sci-fi update of Calder’s Circus (1926-1931), which happens to be on view upstairs at the Whitney. Again, Mr. Stella’s seemingly casual, informal sculptural exercises are for me more exciting than the hulking pieces installed nearby, such as K 459 (2012), made of Plexiglas and resin, and produced with the help of 3-D printing programs.

​Mr. Stella’s embrace of up-to-the-minute technical advances in art-making is admirable, and, as a tribute to an influential artist about to turn 80, this show offers some exciting possibilities for new works using stereolithographic materials and techniques. But perhaps the most radical and provocative shapeshifting he could do now would be to create work that is rather more intimate and personal. 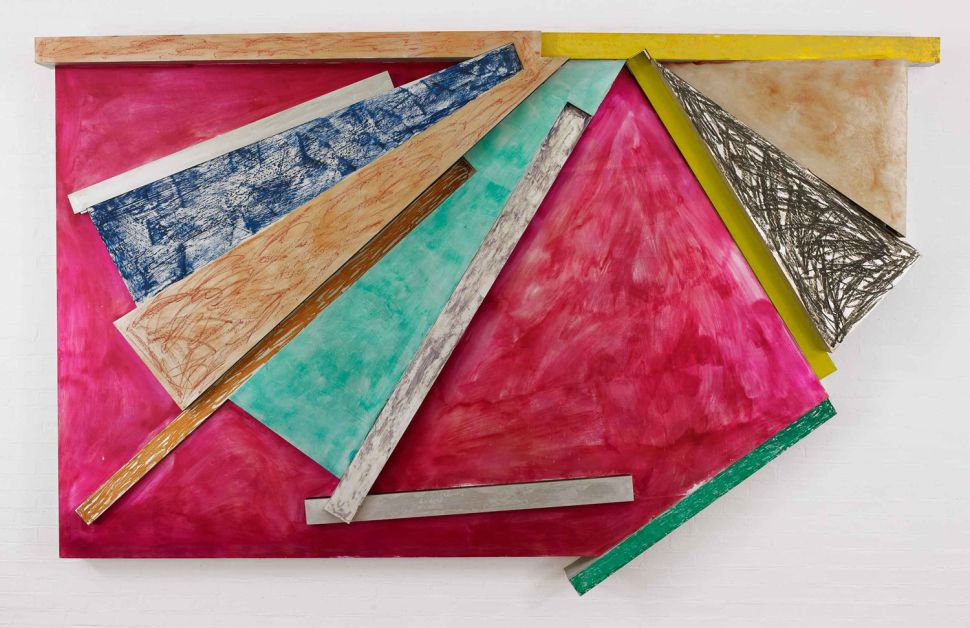