Song of the South, a cover released by the legendary Southern band Alabama in 1988, shot to number one on the country charts in the United States and Canada. It told the story of a Depression-era Southern family and how their fortunes turned for the better when President Franklin D. Roosevelt implemented the Tennessee Valley Authority (TVA), bringing the struggling family a job, followed by “a washing machine, and then a Chevrolet.”

“Daddy was a veteran, a southern Democrat,” sang the band’s lead singer, Randy Owen. “They ought to get a rich man to vote like that.”

Fast forward almost a quarter of a century, and you would have seen Mr. Owen standing beside former Massachusetts Gov. Mitt Romney in support of his 2012 presidential run. Witness also country legend Hank Williams, Jr., who blasted “Reaganomics” in his Billboard country chart climber “The American Dream” in 1982, but some 30 years later could be found on Fox News blasting President Barack Obama as “the enemy.”

The story of the political evolutions of Mr. Owen, Mr. Williams, and millions of their fellow Southerners reached an inevitable conclusion Tuesday night, when Republicans swept the Democratic Party out of almost every statewide office in Kentucky, including the governor’s mansion, which Democrats had lost only twice in the last 68 years. The Democrats entered Tuesday’s election holding five of those six offices. Today, they hold only two and are lucky to have even those—having barely pulled out squeakers in races for Secretary of State and Attorney General.

In a very real sense, the Democratic collapse on Tuesday in Kentucky marked the de facto end of the process.

Kentucky, along with West Virginia, had been the last nettlesome Democratic holdouts against the red Republican tide which began lapping against Southern shores when Dwight D. Eisenhower won Texas, Virginia, Florida and Tennessee in 1952, then added Louisiana, Kentucky and West Virginia to his column in 1956. Aside from Republican victories across much of the South in 1928, when anti-Catholic bigotry against Democratic nominee Al Smith placed several Southern states in the GOP column, Mr. Eisenhower’s victories marked the first time Republicans made headway in Dixie—formerly the “Solid South” of the Democratic Party—since Union troops were still occupying the place after the Civil War.

Over the last 60 years, Republicans began making inroads, to the point where Southern states became solidly red on the presidential level, but homegrown, conservative Democrats continued to prevail on the state and local levels. Still, it was only a matter of time until the political realignment began to trickle down, if you will. One by one, governorships and legislatures throughout the South began to move into the Republican column, beginning in earnest in the 1990s, even as President Bill Clinton was winning a last series of presidential victories in Southern states like Kentucky.

The final cracks in the Democrats’ eroding Southern dam began showing in 2008. In a national landslide for Democrats, Tennessee’s state legislature flipped to the GOP. In the coming years, Alabama, Arkansas, Louisiana and Mississippi would follow suit. By 2014, every legislature in every onetime Confederate state was under Republican control, as well as the entire legislature in onetime Democratic stronghold West Virginia and the state Senate in Kentucky, with Democratic governors surviving only in Kentucky, West Virginia and Virginia, the latter of which has been so altered by in-migration from the northeast that its standing as a Southern state is very much in doubt.

The pollsters blew it, because they couldn’t see the clear trend that was staring them in the face.

In a very real sense, the Democratic collapse on Tuesday in Kentucky marked the de facto end of the process. Yes, Democrats still hold governorships in Virginia and West Virginia, though Republican hopes are high for claiming the governorship in the latter state next year, and they still hold one chamber of the Kentucky legislature, which comes up for election in 2016 as well. But Kentucky was the last Southern state where Democrats stubbornly maintained their stranglehold on most of the levers of power, and on Tuesday, it all got washed away along the banks of the Ohio River.

What is most striking is that so few people saw it coming. Polling consistently indicated that Democratic Attorney General Jack Conway would defeat Republican businessman Matt Bevin by a margin of 3 to 5 percentage points, and the rest of the Democratic ticket appeared to be in a favorable position as well. But the pollsters blew it, just as they blew many key races in the 2014 midterms, in part because they couldn’t see the clear trend that was staring them in the face.

The truth is, Tuesday’s Republican triumph in Kentucky was merely a matter of time. The inexorable march toward Republican supremacy was bound to swamp Kentucky as it had swamped Tennessee, Arkansas and West Virginia in recent years. The South is a conservative place, and with the massive losses suffered by conservative Democratic politicians in the region that began in 2010, conservative Southerners—who in many cases are still registered Democrats—no longer had a home in their traditional party. When the last dominoes began to fall, they fell fast. Kentucky was merely the bookend.

What we saw on Tuesday in Kentucky was the final, dying whimper of the Democratic Party in the South.

National pundits in the coming days will do their best to extrapolate a national lesson from Tuesday’s election results in Kentucky. This is usually a mistake. States and regions differ, and the political tastes of states like Kentucky do not always find themselves in harmony with the national palate.

However, if there is a lesson to be learned with some relevance to 2016, it is this: Any notion Democrats may have had about Hillary Clinton expanding the electoral map into several Southern states her husband carried, like Kentucky and Arkansas, is no longer realistic—as Ms. Clinton herself has telegraphed with her rhetorical lunge leftward during her current campaign.

Make no mistake: What we saw on Tuesday in Kentucky was the final, dying whimper of the Democratic Party in the South. Team Blue had a nice, long run in Dixie, but it has met its Waterloo—or perhaps more appropriately, its Appomattox. All that is left for the Democratic Party is to acknowledge this reality and move on to friendlier ground. The South is gone. 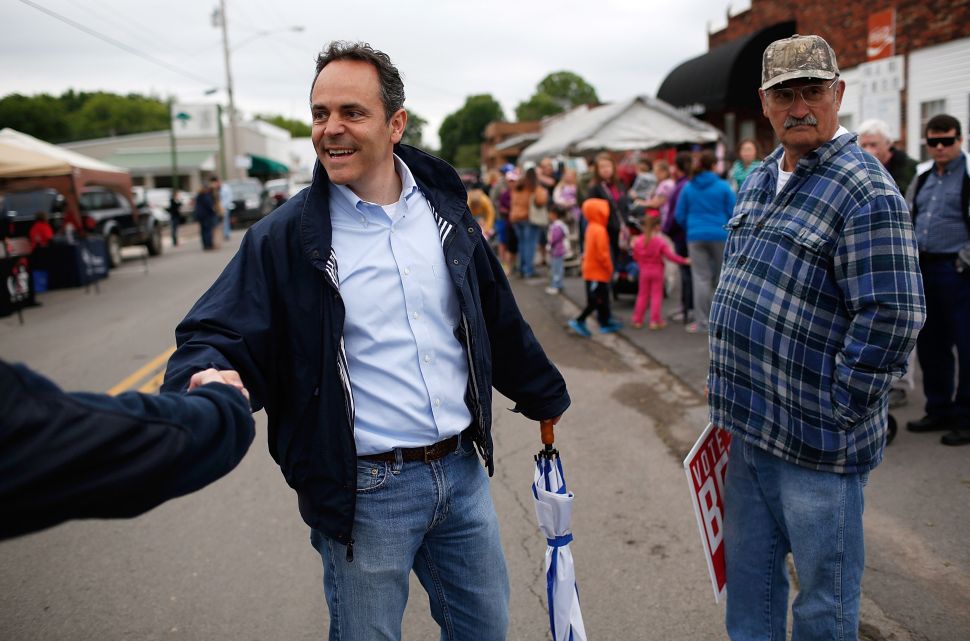