On Friday, November 20, Jonathan Pollard will walk out of a federal prison in North Carolina. Mr. Pollard will be released on parole after spending 30 years in prison for violation of the Espionage Act. He will leave behind new prison friends, like Bernie Madoff, who in a twist of fate became yard mates with Mr. Pollard. His release is long overdue.

Mr. Pollard handed over United States intelligence information to Israel and was arrested as he pleaded for sanctuary at the gate of the Israeli embassy in Washington, D.C. on November 21, 1985. Entry was denied.

Mr. Pollard endangered American-Israeli relations, took action on his own and deserved punishment. He had not been recruited to spy, but foisted himself on Israel.

A U.S. naval intelligence analyst, Jonathan Pollard sought out Aviem Sella, an Israel Air Force colonel who, at the time, was on leave, pursuing a master’s degree in computer science at New York University. Mr. Sela assumed that Mr. Pollard was part of an FBI sting operation, but nevertheless contacted the intel officer of his unit. The response came higher up the ladder, from the head of Israel’s Air Force intel. Surprised, Mr. Sela was told to proceed with caution—but to proceed.

Mr. Pollard was not exactly motivated by patriotism; he asked for money and gifts in return for the information he gave Israel. To start, he asked for a diamond ring and for $10,000. He gave the ring to his girlfriend at the time (who later became his wife and then ex-wife). In addition to the $10,000 up front, he received $2,500 a month for his spying. As much as we can say that he did it to help Israel, Mr. Pollard did it for the money, too (though he claimed he would later repay it all). Many people do now know that Mr. Pollard’s plea deal (he pleaded guilty to the charge of transferring top secret documents to a foreign government) was intended to lessen the sentence of his wife Anne, who was also arrested. The deal included parole for her after serving three years, and was also supposed to lessen Mr. Pollard’s sentence.

At his sentencing, Mr. Pollard said that while his actions “may have been well meaning, they cannot, under any stretch of the imagination, excuse or justify the violation of the law, particularly one that involves the trust of government… I broke trust, ruined and brought disgrace to my family.”

For an entire decade, Israel maintained that Mr. Pollard transferred classified material to an unknown, rogue entity. Finally, Israel admitted that he had transferred the material to them and that they had accepted it.

The sheer number of documents that Mr. Pollard transferred was unfathomable—tens of thousands. Some were simple troop movements of Saddam Hussein’s Iraqi forces; others included satellite photos of the Palestine Liberation Organization headquarters in Tunisia’s capital, which Israel used to strike at the heart of Yasser Arafat’s empire.

Caspar Weinberg, then-Secretary of Defense, made it his mission to deny Mr. Pollard parole as a way of punishing Israel.

Of all the documents he stole, the most important item that Mr. Pollard gave to Israel was a 10-volume guide on how the U.S. interprets signal intelligence. Those 10 volumes were, at the time, the foundation of the National Security Agency playbook. With that book, one could understand U.S. intel and its direction, mission and purpose. It was the key that unlocked all secrets.

Mr. Pollard was investigated by the Naval Criminal Investigative Service. The lead investigator, Ronald Olive, asserted that Mr. Pollard had shopped around the intel to other countries, as well—that he had passed information to South Africa, attempted to contact Pakistan through a third party, and given material to Argentina and Taiwan.

In order to grant him parole, the board needed to hear that Mr. Pollard had somewhere to live and somewhere to work. According to sources, he will be living and working in Manhattan. The terms of his parole dictate that he may not leave the country for five years and he may not conduct any interviews.

These terms are a disappointment for Mr. Pollard. His second wife, a Canadian he married while in prison, now lives in Israel, where Mr. Pollard has been granted citizenship. Israel wants him to come “home.” And he wants to go “home.” But that will have to wait.

Why did Mr. Pollard serve such an inordinately long sentence? The answer, I believe, lies not only in his betrayal of the United States, but also in the behavior of Israel. In the 1980s, the archenemy of the United States was China. In an effort to draw close to the Chinese, Israel shared some of their ill-gotten intel. Caspar Weinberg was Secretary of Defense at the time and he made it his mission to deny Mr. Pollard parole as a way of punishing Israel.

Mr. Weinberger died in 2006. And now, in 2015, Israel has stood by and watched as the United States has signed an agreement with Iran to which they are totally opposed. The release of Mr. Pollard is one of the gifts Israel is receiving from the United States for not causing more damage to that deal.

Justice has its quirks. 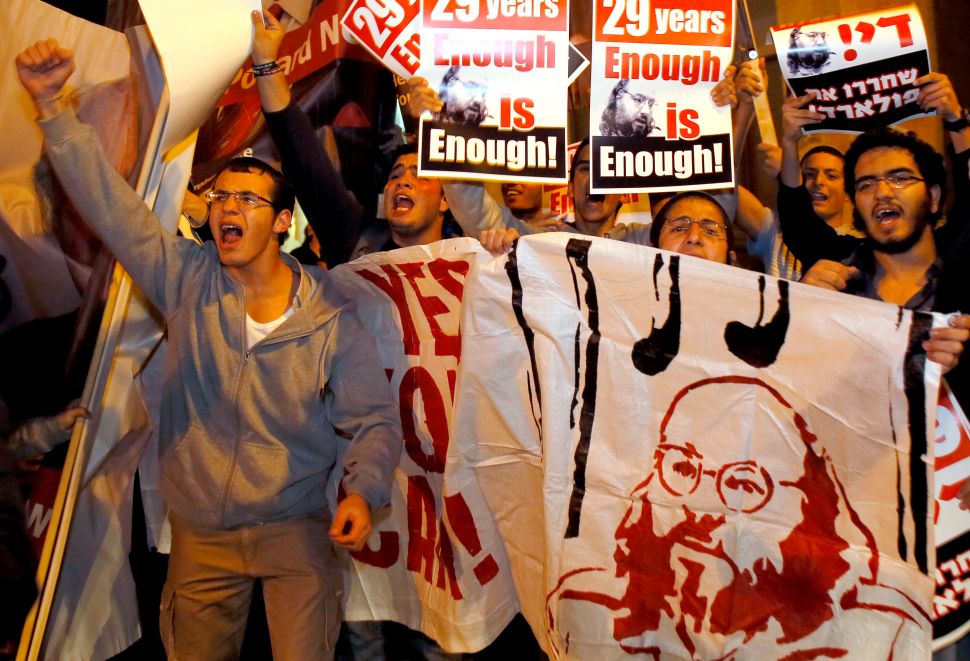