The forest of rock family trees contains only one known instance of a band with twin trunks. If the existential notion of what a “band” is can stretch from an individual like Iron and Wine to a studio illusion (the Archies) or a parade of players (like those under the Fall flag), that still doesn’t include the Vulgar Boatmen, who—in their early ’90s heyday—defied a fundament of the form by maintaining fully functioning lineups in two different cities.

Begun as a long-distance collaboration, two completely separate lineups based 867 miles apart could fairly lay equal claim to the name, repertoire and releases of the Vulgar Boatmen.

The subtitle of Drive Somewhere, an amateurish but worthwhile 2006 DVD documentary, is The Saga of the Vulgar Boatmen. It begins in 1977 at Indiana University, where aspiring punk-rocker Dale Lawrence of the Gizmos met graduate student Robert Ray, who had grown up in Memphis.

“Robert taught the second half of a course about lyrics as literature, which [became] a history of American music. When he mentioned in class that he’d seen Elvis perform live while he was still on Sun, I immediately scheduled office hours with him and we’ve been great friends ever since.” Despite a 13-year age difference, the two had matching taste in books, movies and music—specifically Buddy Holly, Rogers & Hart, the Sex Pistols and Sam Cooke. After Ray moved to Gainesville to teach English at the University of Florida, they began co-writing songs by mailing cassettes back and forth.

“We had no set collaboration method,” says Lawrence. “The songs took shape about every way they could. Sometimes he would add lyrics to a melody of mine, or additional verses, sometimes a mostly finished song needed a bridge.”

“Dale had the melody for ‘Mary Jane,’ ” Ray recalls, “but only a few lyrics and no guitar riff, both of which I provided. The best 50/50 collaboration on the first CD [1989’s You and Your Sister] is ‘Margaret Says.’ It began with Dale’s melody and a similar title; I renamed it for my older daughter.”

The challenge of a long-distance collaboration gained bonus geographic complexity when they decided to record an album. Ray, who was disinclined to tour, had joined (or taken over, depends who you ask) the Vulgar Boatmen, a Florida art-school combo founded by future Silos leader Walter Salas-Humara. After Lawrence converted his post-Gizmos Indianapolis band, Right to Left, to match, two completely separate lineups based 867 miles apart could fairly lay equal claim to the name, repertoire and releases of the Vulgar Boatmen. The Floridians were a recording unit that played out occasionally; with the same style and songs, the Hoosiers played out more but had—other than Lawrence—less of a recording role.

You and Your Sister was mostly recorded at Ray’s home studio, with Lawrence commuting in as co-leader. A couple of tracks were done in Indiana with members of his group; good luck trying to guess which.

Lawrence recalls obsessing over the snare drum sound. “One of the best ones we got was on ‘Mary Jane.’ Trouble was, a lot of that sound was on the scratch-vocal track. When we tried to record a real lead vocal, we lost the great snare sound. So what you hear is actually the scratch vocal, which luckily Robert sang all the way through.”

Magically pulling a consistently economical and exacting sound (which elicited comparison to the Feelies) from more than a dozen musicians in myriad permutations, the two-pronged collective produced three albums of extraordinarily evocative, unornamented guitar pop music, using plain-spoken melodies to tell resonant American short stories that begin in the middle and end nowhere near a conclusion. Ray admits, “I do like elliptical, elusive things, often movies or poems or stories that seem allegorical, but for which the key has not been exactly provided.”

In “Mary Jane,” three lines of uncertainty and guarded desire sketch out a life of yearning and confusion:

My mama said she knows what I ought to do
Sometimes myself I think I know, too
But I call you up and you let it ring *

The best songs on You and Your Sister, which is being reissued by Time Change Records this month in a 25th anniversary edition with three bonus tracks, use restraint and release to shape the music, which can be intensely intimate or wide open. The record summons enormous dynamic range from simplicity and understatement.

The pulsing, obsessive “Change the World All Around” describes one man’s romantic angst:

Last night, I was standing in the driveway, calling your name
Last night, it was late; I could hear your father *

But rather than seeking the solace of one woman, the singer ventures a much grander plea:

Sometimes I just want to change the world all around.*

The six-minute “Drive Somewhere” uses alternating picked chords and a metronomic snare to convey the obsessive-going-on-hypnotic expanse of a highway then turns on a splash cymbal into a joyful declaration of endless possibility. As Lawrence acknowledges, “It was always feel that we were after, rhythm. We just wanted to make music that we would like and want to own.”

After two independently released CDs, the Boatmen signed to a British label in 1995, a seeming commercial break that, with all-too-familiar irony, proved disastrous, ending a dream encouraged by substantial critical support (Greil Marcus did liner notes for the Wide Awake compilation in 2003) and heavy rotation for “Drive Somewhere” on WXRT in Chicago.

First there was drama over which of the many players who could claim membership in the Boatmen were asked to be on the album, then record company politics kept Opposite Sex from a planned U.S. release. (Lawrence expects that failure to be remedied with a reissue.) Ray let the Gainesville band fade away, but the Indiana group—recharged by new bassist Jake Smith (also the singer-guitarist in the similarly minded Mysteries of Life, with his wife, ex-Blake Babies drummer Freda Love Smith)—carried on performing and still does a handful of Midwest shows every year, including an annual January booking at Schuba’s in Chicago. The music endures.

On November 29, the Boatmen and Mysteries of Life will play a special dual record release show in Indianapolis. 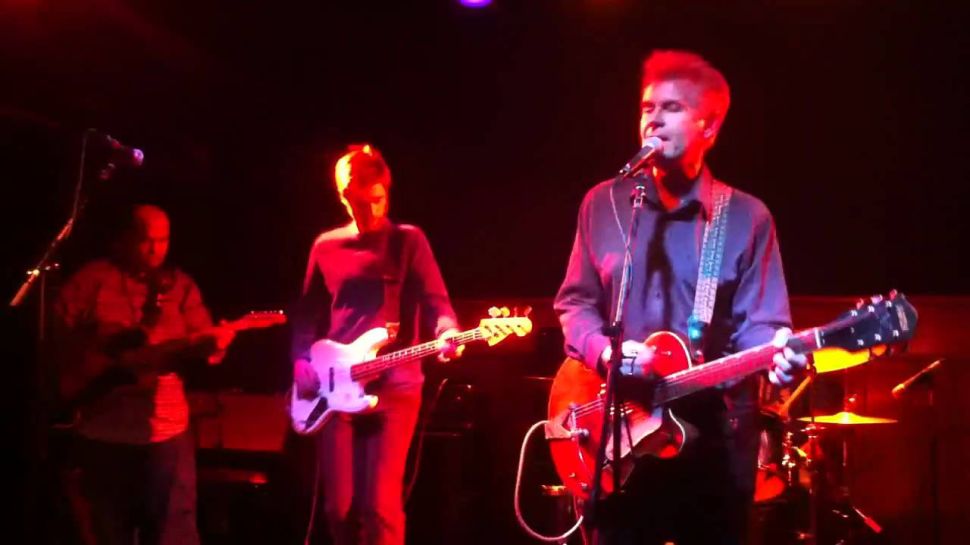