Time to hunker down inside Alexandria for what may be a protracted siege. And so The Walking Dead takes this opportunity to give us a more in-depth look at some of its more prominent (i.e. not yet dead) citizens. Turning its focus from our main cast to some of these less-developed characters like Jessie, Spencer, and that new doctor lady whose name I never caught.

Sure, Rick gets a few scenes here and there, as do Maggie and Tara. But most of our heroes aren’t around. Daryl, Sasha and Abraham are still off leading the rest of the walkers away (which seems to be taking much longer than anticipated, so I expect the next episode will focus on whatever hiccups they’re facing). And Glenn is missing and presumed dead (at least by those who decide to paint his name on Alexandria’s brand new memorial wall).

Meanwhile several of the others who should still be here are conspicuously absent. Notably Carol, who was a badass during the Wolf fight and now is just…not around? And Michonne and Morgan barely appear either.

Instead we’re going to learn all about these here Alexandrians. First we get an introductory scene establishing the basic situation—after whatever happened with the RV, Rick has been unable to prevent half of the walkers from reaching Alexandria, and now they’re surrounding the city 20 corpses deep. The walls are holding, but nobody knows for how long. Which casts an obvious pall over the town and everyone in it—and the scenes that follow are all meant to show how the threat outside the walls creates new threats inside them, as everyone starts to unravel in his or her own special way.

(Oh, and hey Rick, a word to the wise: When telling the freaked-out citizens of a town that they need to keep silent so the 10,000 walkers besieging their town may eventually leave, maybe find a better metaphor than “silent as a graveyard?” Dude.)

So first we get Spencer, Deanna’s son, acting out in a complex mix of competence and idiocy, selflessness and selfishness. He sees the Alexandrians start to raid the communal pantry and talks them down, noting that sure, the walkers outside might one day kill them, but if they just decide that nothing matters anymore because of that and use up all the food, they’re going to end up killing themselves a lot faster.

And then he goes and sneaks a whole bunch of food for himself anyway, because why the hell not? He gets drunk, and when his mom catches wise he blows up at her, saying (not wrongly) that this is all her fault for having coddled the town instead of making them get tough. Then later (hopefully after he sobers up?) he goes and relieves Rosita on guard duty and pensively…eats crackers.

And I…just don’t care about any of this? Something The Walking Dead really still has to learn is that it can’t make us care about new characters simply by telling us that we’re supposed to care about them. It has to give us a reason to care. More than this, anyway.

Take the new doctor (imdb tells me she is named “Denise.”) She was only introduced two episodes ago, and all we really know about her is that she hasn’t done any real doctoring since med school, and that she’s freaked out because she doesn’t want the responsibility of saving people. That’s it.

And yet this episode seems to think we already care a whole lot whether she is able to save this particular patient (another character we’ve only spent one episode knowing), and how she feels about it. And then apparently we’re really supposed to like that she ends up making out with Tara for helping get her through it—but it’s more of a giant shrug. (By the way, the show is barely even trying to disguise the fact that Alana Masterson is very pregnant in these scenes.) Merrit Wever is a fantastic actor, but her character just hasn’t done anything yet. We don’t know her enough and having been through enough with her to care.

Just like Jessie, whose major character traits so far seem to consist of a) she’s hot, b) she’s tough for an Alexandrian—probably because of all that time she spent getting beat the tar out of by her husband—and c) she’s a pretty decent mom, or at least we’re allowed to think so as long as we ignore the fact that she let her husband beat the tar out of their kids a whole lot.

Her purpose here seems mostly to be to spread the gospel of Rick, making the idea that he’s actually right (about everything all the time) more palatable to the Alexandrians. She sees that one of her neighbors has killed herself and kills the zombie she’s become. And then turns around to the crowd that’d gathered and announces that, “This is what life looks like now.” For doing this, she is also rewarded with makeouts.

The two Alexandrians we do actually care about, because we’ve actually gotten to know them by this point, are Deanna and Aaron.

The latter gets the only real plotline of the episode, but it still doesn’t go much of anywhere. He’s feeling guilty for having led the Wolves to Alexandria, so as a sort of penance, he decides to help Maggie try to find Glenn. Which seems sort of silly—if everyone who made a fatal mistake in this world had to do penance, this would just be a show full of nonstop penance quests.

But then they have to fight some very skeletal sewer zombies (wait, if they’re skeletons, haven’t their brains decomposed too? Why does stabbing them in the head still do anything?), and having Aaron along makes Maggie realize that this was always an unrealistic despair/suicide mission that she can’t really drag him along on. Or herself, in the end. If Glenn is alive somehow, she’s going to have to trust him to make his way back to her. So instead she just keeps hope alive by painting his name off that memorial wall.

And Deanna spends the episode similarly bouncing between hopefulness and hopelessness. She’s given some vigor back when she sees her son defend the pantry rationing, goes off and starts writing up new plans for the reorganization of the city, complete with a new motto: Dolor hic tibi proderit olim. (From Ovid: “Someday this pain will be useful to you.”)

But then she encounters drunk Spencer and his hypocrisy and is flung into another despair spiral that ends with her uselessly stabbing a walker in the chest with a broken bottle (man, someone has got to start teaching these people how to kill zombies). And she then basically abdicates her throne to Rick…which was probably going to happen all along anyway. 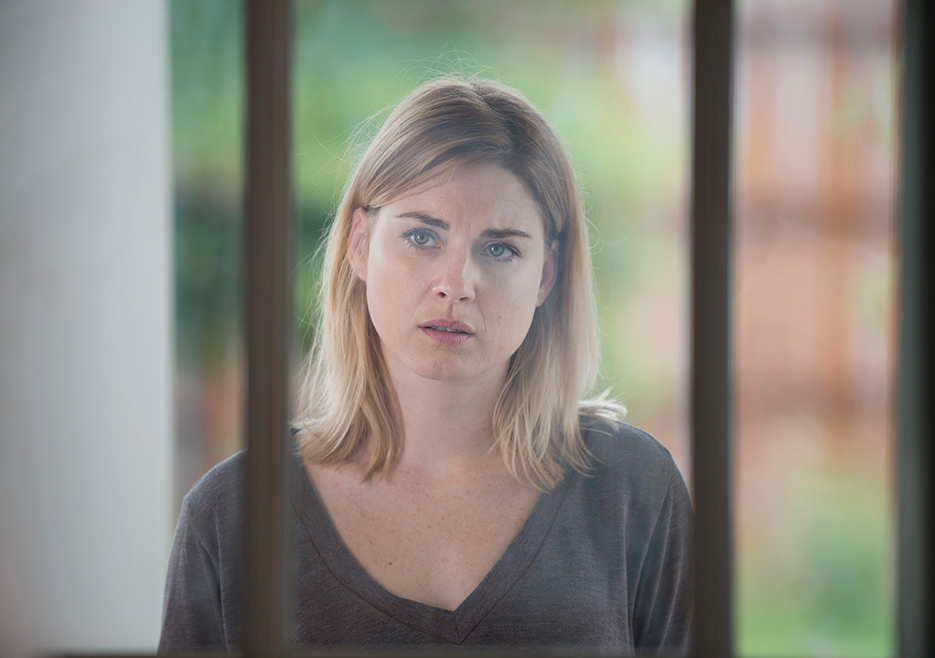