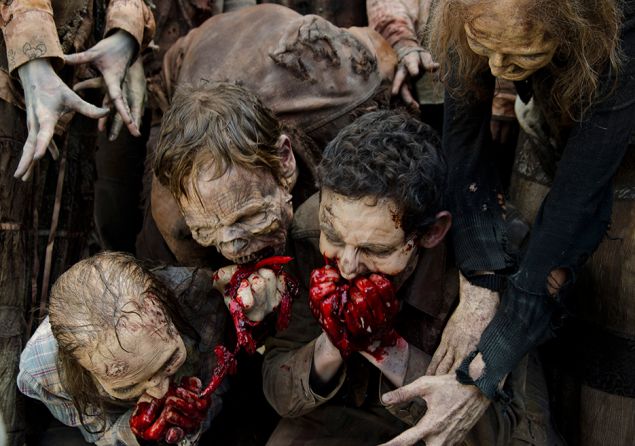 After weeks of pretty impressive delaying tactics, we finally have our answer: Yes, Glenn is alive. Yes, he survived pretty much the way we expected but couldn’t really wrap our heads around, by climbing under that Dumpster and stabbing any walker that got close, then just waiting it out. And no, nobody came to save him, unless you count weirdo loner Enid, who was there to throw him a water bottle when he finally dragged his dehydrated self out from his hiding spot.

I don’t know, but I’m pretty sure I would have enjoyed this reveal much more without the whole speculation circus of the last three weeks. Even though I suspected on my own that Glenn’s death wasn’t what it seemed, had I not had my suspicions reflected in the funhouse mirror of social media, my reaction to the beginning of “Heads Up” would have been, “Woohoo! Glenn’s alive!” Instead of “Oh, looks like everyone was right, and yeah that explains why he wasn’t in the Talking Dead montage and why the producers were making such oblique comments and why Steven Yeun was seen on set, and also what a clever trick by the producers to cut his name out of the opening credits for three episodes, kudos.” I would have preferred the “Woohoo!” reaction.

Anyway, Glenn drags a reluctant Enid along to make his way back to Alexandria to see if Maggie survived whatever disaster obviously took place there. Enid is petulant and glum and basically all “Isn’t it so dramatic and weird, like, being a teenager in the apocalypse?” Outwardly, she’s gone nihilistic, figuring that the world is “trying to die.” Or really, as Glenn puts it, she is just tired of losing people and won’t let herself get close to anyone again. Whatever the case, she’s clearly been spending a lot of time mooning around outside the walls hoarding stuff. Useful for Glenn, but still weird as hell.

Glenn, citing the fact that Maggie wouldn’t have left her behind—which is pretty irrelevant, because he wouldn’t either—convinces her to come back, but not before they swing by the walker-herding plan’s meeting spot, marked by green balloons. Which might as well have a “will come in useful later” sign hanging from them, because there doesn’t seem to be any particular purpose for them to take them along right now. Enid decides to blow up like 10 more of them anyway (with a conveniently left behind helium tank) for the vague reason that they’ll be a distraction for walkers. Or something.

Anyway, when they get to Alexandria, surrounded by an impenetrable horde of walkers, they’re able to use the balloons to signal to Maggie, who has been keeping a constant vigil on the wall. Which would have been an awesome reunion, except that Rick and Co. have been dealing with about 100 different crises inside the town, and they all come to a head at just about the same moment that Enid releases the balloons.

Crisis #1: Deanna’s idiot son Spencer goes all maverick with a bad solo plan to get beyond the wall of walkers, shimmying across a rope strung to another rooftop. But of course the rope breaks and then everyone has to scramble to make sure he doesn’t die. Tara (still not really doing a particularly great job hiding Alanna Masterson’s pregnancy) shoots a bunch of walkers, and Rick chews her out for it, but mostly just because he’s frustrated that he couldn’t use the distraction to make a break for it to a car and lead the walkers away. If it had been anyone else, he might have, but he can’t let the leader of the community lose her last living family member. Deanna, whose sights are now firmly and quixotically set on the future despite the town’s current dire straits, is not pleased with this rationale.

Crisis #2: The inner circle has by now realized that Morgan’s pacifism is a problem—he let some Wolves go instead of killing them, and then they showed up to ruin Rick’s plan to use the RV to lead the herd away—but he remains mostly unshaken in his core beliefs. Which is not sitting well with tough murderess Carol, and when she sees Morgan sneaking Doctor Denise into a locked apartment, her suspicions are aroused. After a detour to drop baby Judith off with Jessie and drop some more cruel wisdom on little Sam, she comes and confronts Morgan about the Wolf he is obviously not just hiding but getting medical treatment for inside their supposedly safe town.

Crisis #3: Horrible, rage-filled teen Ron decides to hide his jealousy and hatred under the guise of wanting Rick to teach him to shoot, but only so he can get his hands on a gun. Not to be give up his Worst Teenager of the Apocalypse trophy quite so easily, Carl acts like a superior little shit, interjecting unnecessary comments about how he already knows all of this throughout Ron’s first gun safety lesson. Which only further goads Ron on. He breaks into the armory, steals some bullets and starts stalking Carl, pistol drawn.

Also giving weapons lessons, incidentally, is Rosita, who is teaching Eugene and some of the Alexandrians how to wield a machete. A throwaway scene that is only notable because it means Rosita actually gets some lines for a change. Probably as compensation for the fact that Abraham is about to ride back into town with an RPG slung over his shoulder and break up with her.

Crisis #4: Father Gabriel continues to be a person who exists.

But all of these crises are subsumed under, and symbolized by, the big one: The building just outside the walls, the one the Wolves crashed their tractor trailer into, is slowly, creakily falling apart, a crack down its center throwing off piece by splintery piece just as Alexandria metaphorically fragments from the inside. And right when Maggie spies the balloons floating overhead and knows Glenn is alive, just as Ron pulls his gun and Carol confronts Morgan, the tower of the building lurches free and knocks over a section of wall. Ironically, Rick has spent the entire episode building braces to shore up a nearby section of wall, a gesture rendered instantly for naught. The walls are down and the walkers, the thousands of them at their gates, are about to stream in. 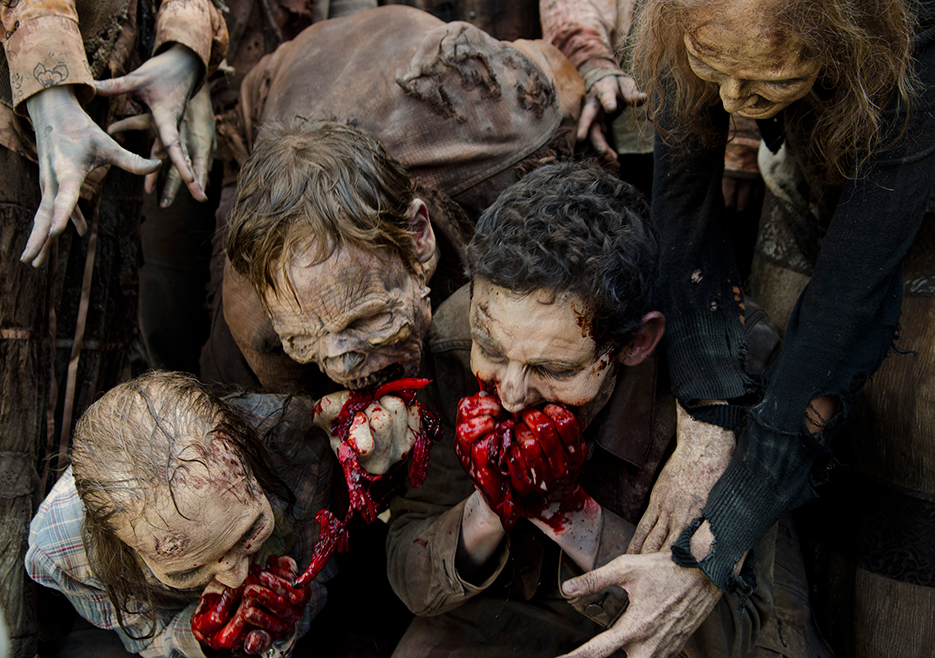