Everyone remembers the very first watch they were given. Whether you picked out a comic book motif from the local toy store as a kid, or thrilled to the funky new vibe of Swatch when it hit the U.S. way back when, the memory is there. The first important watch that comes along from a manufacturer of distinction—a brand with a unique heritage—also occupies a special space. Here, we talk watches with six driven, but very different New York-based collectors.

Michael Lorber, a real estate agent at The SLS Team, has amassed a collection of 50 high-end watches, he estimates. His first, a Breitling Chronograph, was given to him by his parents in 1992 when he was 13 years old. Since then, he has acquired a couple of timepieces every year to celebrate milestones such as passing the bar exam, or closing a big deal, but he is hesitant to play favorites. “It’s like picking your favorite child. I have sentimental watches that I love, including a gold watch that belonged to my grandfather,” he said. His laundry list of favorites includes four or five Pateks, a monogrammed Jaeger LeCoultre, and a Vacheron Constantin driving watch from 1921 with an angled face that allows motorists to see the time without turning their hand. I’m not much of a vintage watch person, though. I’m just scared to take care of them,” he conceded. “But if you want to have a good time, you have to have a good watch.”

Michael Moskowitz, the creative director of web auction platform eBay, has a very particular outlook on his watch collection. “It’s a modest collection, not expansive. It’s more of a selection of eclectic items to pair with different outfits,” he said during a visit to his office. He is one of a small cache of watch collectors who hold strong views about certain manufacturers. “Everyone has a gold Rolex and gold doesn’t appeal to me in a visceral way,” he said. “I don’t want to come off as a poorly spoken Russian oligarch with a manhole-cover-sized bezel on his wrist, either, so I only wear a Rolex in the summer months, but it’s the kind of watch an antihero in a Bond movie handling the scuba equipment might have worn, not a ‘Bond’ watch.” Of course, the majority of his vintage timepieces—including army-issue watches like Waltham, Hamilton, and Bulova timepieces from the ’40s, ’50s, and ’60s—are found on his own website. “Almost my whole collection I’ve found on eBay, because I hate paying through the nose when I don’t need to,” he quipped with caution. “But never buy a watch from a place whose name begins with the letter M. The big four are Montevideo, Mumbai, Mexico City and Moscow. This is from personal experience.”

Marco Cilia, the general manager for Hotel Americano, is an unassuming watch collector, whose collection spans time periods and brands. “With time, I think watch collecting slowly grew on me. I’m not a fan of jewelry on a man other than the essentials,” he said. “So, in my view, a watch becomes a statement piece, and a way to express your individuality.” Despite his passion for collecting timepieces, Mr. Cilia has not formed any firm allegiances with one particular maker. “I like to differentiate,” he said. “I will go for a particular brand one time, and then sometimes for a design moment or time in history. The goal is to have a watch for any occasion and any mood you are in.” These include his essentials: a Rolex Yacht-master, an Audemars Piguet Royal Oak, a Hublot Big Bang, a Panerai Power Reserve and GMT, and an IWC Portuguese. “I generally find most of my watches in-store, but I know a few dealers, so I always go to them first,” he said. “But I always remember, only buy it if you really want it.”

Tommy Fazio, the former men’s fashion director of Nordstrom and now president and creative director of the PROJECT trade show, is a Rolex loyalist. “I received my first Rolex on my 40th birthday from a very special person,” he said slyly. “That’s all I’ll say.” Though he started collecting watches modestly enough with a Timex Expedition, his obsession quickly snowballed. Now he’s a seasoned pro with some sage advice for potential collectors. “Do your homework first before going into a store. Know how much you want to spend, and what type of watch you want to purchase,” he said, sounding like a veteran car collector. “There are a few brands whose stores I love to go into and look at the new models. I recently discovered Bamford watches at Dover Street Market in Murray Hill, which are customized Rolex watches covered in a permanent black coating. Definitely unique.”

Matt Breen is a co-founder of nouveau menswear destination Carson Street Clothiers on Crosby Street in Soho. The lawyer-turned-menswear obsessive has amassed a bevy of timepieces, beginning his obsession as a boy. “My first watch was in first grade, The Shark Watch. I was obsessed, I remember trying to hold all four of the buttons at once so the shark would swim across the screen, never did get it to work,” he joked of the classic Day-Glo-colored accessory. “On a more serious note, my first true ‘timepiece’ was a Stainless Steel 1998 Rolex Datejust, which was a graduation gift from my parents and shockingly survived all four years of college. Needless to say, once it adorned my wrist I never turned back from the world of horology. To this day, it is one of my favorite pieces to wear.” This is one of the pieces he considers to be the “backbone” of his collection, in addition to a brown band and black band watch. “Once you have these three pieces covered, you have a timepiece for any occasion. There is no need to spend a ton of money on your first few pieces, especially if this is something you want to do the rest of your life. You will never be able to work up the ladder if you start at the top. Once you have several pieces,  you can start to seek out the unique, that really speak to you as an individual, that’s where it becomes very fun.”

Director and screenwriter Victor Kubicek has a certain lens of romanticism when it comes to his collection, and considers each piece to be a peep into his past. “I’ve come to know my Grandpa through my watches. From him, I have some of the most interesting ones, like a pocket watch, which I never wear, with a peacock on the back detailed in blue, green and black. So they carry memories for me that are charged with emotion, and that’s critical,” he recalled over lunch. “I’m writing a period story right now, and I always wonder what kind of watch each character would have worn. You have to know what kind of watch he’s wearing to know who he might be.” A favorite of his, an Omega yellow gold timepiece with a hand-hammered face and black band, seemed to be at odds with itself after taking several plunges in the , one particular instance due to a paparazzi chase. “As a kid I had a crush on a young Chloë Sevigny,” he said of the starlet whom he was on vacation with at the time. “We went to the beach where lots of people were taking pictures so we just ran into the .”

“We were having fun, but two minutes later I realized I was wearing the watch,” he recalled. “My best friends helped me patch it together as a high school graduation present, so it’s a bit like a beloved dog with a chewed-off ear.” His Tao of collecting was taught to him by his father, famed ski champion J.R. Kubicek IV. “My dad didn’t like shiny objects, and he wasn’t easily impressed,” he said while puffing his e-cigarette. “He taught me that a watch isn’t meant to display wealth, but to recognize that another man’s time is important.” 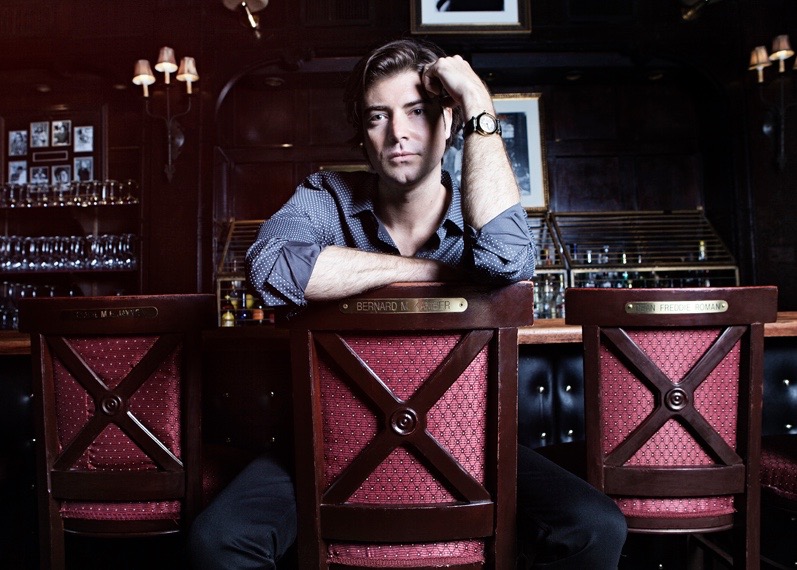