One of the most common questions about publicity stunts is: What happens when they fail? The question is not referring to the stunt going horribly awry but rather, what happens if nobody cares? What happens if it doesn’t get any attention?

The reality is that this is by far the most common outcome. Creators work on a project for weeks or months, hoping it will go viral online, only to be met mostly with silence. But even this outcome might not be so bad in today’s media culture. Outlets are often so desperate for content that they’ll expose and discuss these stunts after they’ve been revealed—even if the number of people ‘fooled’ or impacted is in the dozens.

For instance, I once did a stunt where I tried to pay celebrities to tweet offensive things via the service SponsoredTweets.com. None of the tweets were allowed and I was soon banned from the service. But due to poor reading comprehension and an indifference to the distinction between real and fake, Crushable was happy to write about it as though it was real. Basically, I got the attention without spending the money.

The launch of a satirical restaurant “Lura” (Swedish for trick or deceive) follows similar lines. A few anonymous artists got together to create an absurd sendup of your classic, hipster foodie joint—complete with obnoxious social media accounts and window displays. In reality, Lura’s Rhode Island location is a shuttered coffee shop. The project got a little traction online but by the artists admission, approximately two people were offended when the stunt was revealed as a fake.

It was only after that media coverage and attention came. Eater wrote about it with the sensational headline “Fake Restaurant Lura Cafe Takes a Shot at ‘Elitist Foodies’”. Sites like Eatglobe and The Atlantic’s CityLab followed, and the Washington Post considered doing a story on it as well. A pretty impressive haul for a ‘display’ seen by essentially no one.

So I wanted to interview the geniuses behind the stunt to find out a little bit more about how it happened and what we can learn from it. Of course, in doing so I am falling prey to exactly the same trends I am criticizing—but hey, these guys earned it.

Can you give us some background on this art project and your motivations behind it? How did it come about and why did you decide to do it?

We had already been interested in creating an installation project, and chose foodie culture as our subject after briefly exploring Providence and found ourselves talking about our favorite restaurants and cafes (three of us are foodies ourselves). Being interested in the currently fast-paced millennial / internet culture, our discussion turned to foodie culture trends and tropes as well as its emerging dominance on the web, Instagram specifically.

It seemed like you got a lot of press about the stunt after it happened and had been revealed. A lot of that reporting had a vibe like ‘Look at how they fooled all these people!’ Who exactly did you guys fool? Did many people think this was real?

Our online presence was meant to be purely satirical, so we did not entirely expect people to be fooled; most of our audience (millennials and other restaurant owners, mainly) got the joke, were amused, and moved on with their day. However, on our “opening day” there were a few who went to Lura’s address prepared to have brunch. Two of these people were noticeably confused (we were watching from across the street for about an hour) and voiced their anger on Instagram shortly afterwards, offended that we had made a mockery of their lifestyle.

Before the pseudo-launch of Lura Cafe you seem to have been only using Facebook and Instagram to drive attention to the upcoming launch. Did you try to approach any media outlets? If so, what was their reaction and if not, why? Was it purposeful to keep the campaign low-key?

We’d certainly thought about using other platforms like Yelp and Foursquare, or posters and postcards. But we didn’t feel like they’d make sense for Lura’s purpose, which was mainly to observe the effects of mainstream hype on fast-paced social media; hence Facebook and Instagram. We had no contact with any media outlets during the making of Lura, we did not expect it to gain nearly as much attention as it did. We had given ourselves only about three weeks for this project and gained a follower count of just around 150, so we were only thinking in small scale through the entire process.

Can you walk us through how you got so much attention after the fact? I imagine more people heard about it after the reveal than before?

Right, most of our attention came after we revealed Lura’s real purpose on Instagram. The two individuals who voiced their offense in the comments (one complained further on their own Instagram) may also have helped gain attention, as they were almost the epitome of hipster food/lifestyle enthusiasts and had very high follower counts. Shortly afterwards, we were contacted by Eatglobe, Eater, CityLab, and Washington Post (although they decided not to write about us), who all mentioned that they had found out about Lura through Instagram, so we imagine a lot of our attention was gained mainly through word-of-mouth.

Also I have to ask, why did you decide to stay anonymous? Why not take credit for this? And why Providence RI?

All of us live in Downcity Providence, RI. The foreclosed building on 66 Fountain Street was convenient and accessible; it was originally occupied by ‘Coffee King,’ a mom-and-pop coffee and sandwich shop. Providence is also occupied by a ton of recognized restaurants such as Birch, Gracie’s, Local 121, and North, all places where foodies thrive.

We decided to stay anonymous for various reasons, one being the consideration of the aftermath; no one likes being made a fool of and if they can find someone to blame, we feel the installation would become something else. Lura did not reflect any personal opinions about foodie lifestyle; and our anonymity allowed us to do what we did and have our audience take the joke as they wished without consequence. We also did not ask for permission to install Lura on the building.

Can you tell us more about the reactions you have received, whether it is from media, foodies or others? Were they aligned with your expectations?

On opening day, we had sat across the street from Lura for about an hour just to people-watch. We were actually able to predict who would stop to look at the installation—young people in flannel, dudes with mustaches and tattoos, women with loose top buns. Everyone else not completely fitting the millennial description hardly noticed Lura at all.

What’s fascinating to us is those who believed Lura to be a real cafe despite us being clear about our illegitimacy as a real restaurant. On fast-paced social media, people can choose to see what they want to see. We are also highly visual consumers; we love to see images and like to consume the simplest visual information over the lowest amount of time. We imagine that the offended “customers,” who circled around the building in a confused state and looked in their phones and through the windows (which shows only the dusty interior remains of Coffee King), looked for answers everywhere but the write-up on the windows because anything text-heavy was too effortful.

The press attention we received allowed people to look back at our online presence and really take a look at our content after hearing that this restaurant was a hoax. They get to be in on the joke and laugh at what happened, as well as (hopefully) how easy it was to imitate all that is considered sophisticated and trendy. Our branding/identity process involved simply making mood boards on Pinterest and gathering inspiration from foodie Instagrams. The Lura logo took less than a couple of hours to make; we used a typical sans-serif typeface and put a bike on it. We had a simple lox & bagel photo shoot featuring two fairly young and conventionally attractive art students from RISD.

Is the Lura Cafe stunt just the beginning of your campaign or you see it as a one-off stunt? Should we expect more from you in the near future?

Lura is a one-time installation project, it was taken down shortly after we installed it and we had no intention of bringing it back (much to the Washington Post’s dismay). Currently, two of the team members are working on another food-related project but it will not be related to and is unlikely to be of the same nature as Lura. 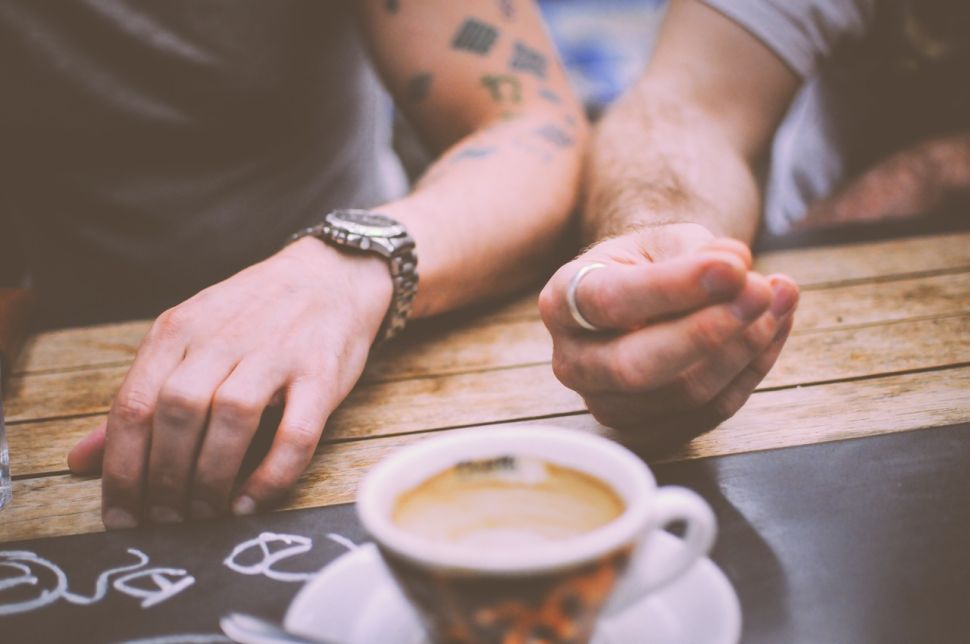