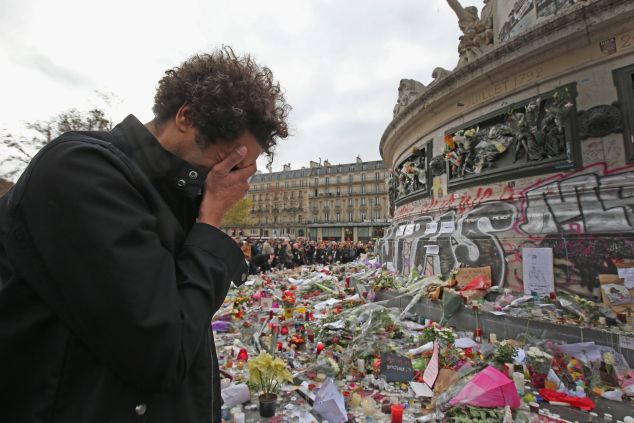 A man weeps for a lost friend as people gather to observe a minute of silence at the Place de la Republique in memory of the victims of the Paris terror attacks last Friday, on November 16, 2015 (Photo: Christopher Furlong/Getty Images)

I had the opportunity to spend a length of time in Paris 30-some years ago. It stays with you. I haven’t smoked in decades but thinking of it now, I still remember a cat in a window observed while blissfully walking the narrow, rainy streets alone before sunrise and I’m dying for a Gauloises. After a very short time came a sense of being at home there; even more than I felt at home back in New England or anyplace I’d ever been before and maybe everyone feels that; it was a heightened sense of being, of belonging; to Paris, to the world.

Possibly what Maimonides experienced when he ascended Temple Mount: That I had come to the center of the world. And that is maybe what drew Hemingway and Joyce and Picasso, what demanded of Hitler that he take it in conquest, what brought Henry Kissinger, Thich Nhat Han and Le Duc Tho to bring peace to a war that was tearing the world to pieces.

It is what brought terrorists there this weekend: To destroy Paris, to destroy the world at its center.

The New York Times asked this weekend on the front page: “Ambulances screamed down the boulevards, as the French capital was left to wonder: Why us? Once Again?”

This is no longer ‘France’ as we understood it; it is an economic zone, a global abstraction, a stylish feature of Americanized post-war world culture.

“Deakin University’s Professor Greg Barton said Islamic State appeared to have ‘crossed a threshold’ and taken its operations ‘into the realm of Al Qaida’ with the Paris attacks, with an audacity and level of co-ordination that should leave us all worried,” News.com.au reported.

After the attacks, Ann Coulter Tweeted: “HOW DID THIS HAPPEN? French people ran onto the street with signs that said, ‘Je Suis Charlie’! Why didn’t that stop this?” And over the weekend Parisians wrote heartfelt sentiments on ad hoc memorial like: “Books not Bombs.”

President François Hollande came out strong and blamed the Islamic State for “acts of war” but if these collective sentiments represent the people, France is doomed.

France can no longer be said to be the Roman Catholic country which forged Europe for more than a thousand years. In light of its recent joining with its neighbors in the EU, it might be said that it is no longer actually “France” as we understood France to be even in the late 1950s when Andre Malraux was Minister of Culture and Charles De Gaulle still registered in the collective memory; it is now an economic zone, a global abstraction, a stylish feature of Americanized post-war world culture. Today Islam is a widely practiced religion and a growing industry. More unintended consequences of the removal of all fences in the ill-fated EU.

In time it may well be France’s destiny to “turn Muslim,” just as it was destiny for the magnificent Hagia Sophia (“Holy Wisdom”) in Constantinople to become a mosque in Istanbul.

I created a kind of stir after the tragic Charlie Hebdo bombings—a threshold event and prelude to this week’s far greater tragedy—by making the suggestion that France, the post-war, eclectic, globalist American friend in the abstraction of “the West” was on the way to a “two-state solution” if it was unable to break the psychological dominance of the terrorists, who increasingly in France and throughout Europe appear to be taking the advantage.

Europe, taking America’s lead since the Oslo Accords signed by the Clinton administration in 1993, I claimed, “found the ‘two-state solution’ to be the practical alternative for Israel, whose situation in the 1990s remarkably resembles those today throughout Europe, as the terror attacks on Charlie Hebdo make increasingly clear. Israel’s situation then and now is much the same as those rising today in London, in Paris, in Germany and throughout Europe.”

We have been told by the Europeans for two decades that they will forcefully advance our lead on this: The only solution to all-out war, the only way to appease and accommodate Arab terrorism in Israel is a two-state solution. Now, in this second horrendous attack by barbarians in the heart of Europe, the two-state solution begins to come into view as a practicable solution for defenseless France.

Not now, but in time and perhaps soon, cultural or religious groups hostile throughout Europe, possibly with sympathies toward ISIS or al Qaeda, could consider bringing a case to the U.N. for autonomous state status where they are most densely populated in post-Christian Europe. With some credibility, citing Europe’s and America’s long-term plans for Israel as precedent.

The only other option is to stand and fight. But that has been the solution right along. And soon it will be too late, as this is just beginning. 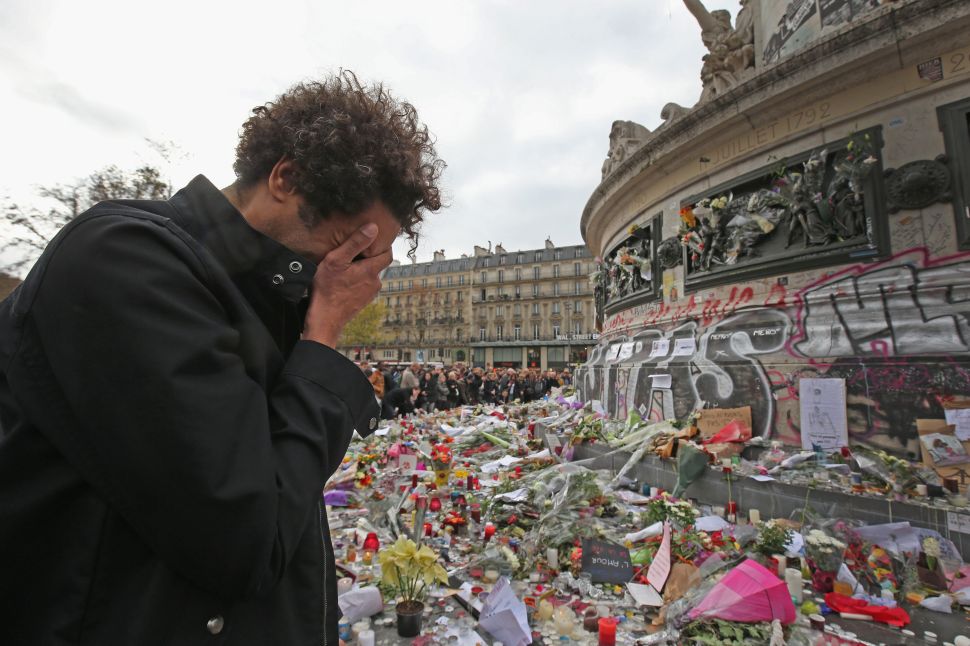