When the Democratic presidential primary kicks off in Iowa in February 2016, the state will also be gearing up for the U.S. Senate race to unseat incumbent Senior Senator, Republican Chuck Grassley, who has held the position since 1981. Three Democrats have declared they are running. One of them—former Iowa State Senator, Democratic Caucus Chair in the precinct of Clarence, Iowa, and bankruptcy lawyer, Tom Fiegen—has formally endorsed Senator Bernie Sanders for president, and is one of his greatest allies in the battle to win the first Democratic presidential primary of the 2016 election cycle.

“The first time I heard Bernie Sanders speak was in May 2014,” said Mr. Fiegen in a phone interview with the Observer. “He came to a little county on the eastern edge of Iowa, Clinton County, to speak in a little town called Goose Lake. There’s a wedding hall there. 300 people came to hear him, more than there are people in that little Town of Goose Lake. After he spoke, the mood was electric, and people were saying to each other, ‘This man should run for president,’ and he hadn’t even hinted at presidential ambitions that night.”

“I want to fix the bribery of politicians in the guise of campaign contributions,” Mr. Fiegen said. “People throw around the reference to Citizens United, but the problem is much more systemic and ingrained than that.”

What works for corporations doesn’t work for small businesses. We need to help them keep their doors open.

For the past 27 years, Mr. Fiegen has specialized in bankruptcy cases and currently runs his firm out of Cedar Rapids, Iowa. He was inspired by his parents, who nearly lost their farm in the 1980s.

“I was volunteering at a farm aid clinic in the eighties where lenders were taking family pets as collateral and selling them at short sale,” Mr. Fiegen said. “Congress passed chapter 12 reorganization bankruptcy legislation, and immediately the landscape changed. Lenders started negotiating in good faith so people could keep their farms. If elected, I would make it legal for people to restructure their home mortgages under chapter 13 bankruptcy. In 2009, a bill to that effect failed in the senate by two votes. Senator Grassley was one of those opposed. If chapter 13 had been amended to allow homeowners to restructure their mortgages, I guarantee there would be millions of people who would’ve kept their homes coming out of the 2008 recession, who are now renting or living with relatives because they were foreclosed and they had no way to cure their mortgage overages.”

Many of Mr. Fiegen’s clients have suffered a major health crisis. Left with thousands of dollars in expenses with no way to pay, their only alternative is to declare bankruptcy. Small businesses fall under the same bankruptcy laws as corporations, which makes them suffer even more.

It is apparent we’re a very old, grey party.

“Congress tried to pass a small business version. It has not worked. We need to amend it to make it less expensive, less time-consuming for a small business that has some ability to save their family business rather than pay thousands of dollars for chapter 11 re-organization,” he added. “It’s a one-size law from large corporations to mom-and-pop stores. A lot of what works well for corporations doesn’t work for small businesses. We need to figure out a way to help them keep their doors open.”

Mr. Fiegen taught economics at Kirkwood Community College in Iowa for 10 years and wants to fix the state’s economic problems which have been uprooted by trade agreements like NAFTA.

“I can take you to towns that have been decimated from losing factories—factories that produced automotive parts, vacuum cleaners, washing machines, tractors—all of those factories have closed and moved to Mexico, leaving ghettos where there used to be prosperous, vibrant communities with well-paying middle class jobs.”

We badly, badly need more young people to get involved with the Democratic Party.

A champion of labor unions, Mr. Fiegen advocates for raising the minimum wage and creating the opportunity for workers to form a collective bargaining unit — especially those at Wal-Mart, who, according to Mr. Fiegen, is “the crack in the dam allowing working people to sink into poverty.”

Mr. Fiegen vocalized his support for Mr. Sanders after many of his own supporters implored him to do so. His campaign issued a formal endorsement this week.

His decision has been well-received, but many members of the Iowa Democratic party haven’t shared his enthusiasm for the Democratic presidential candidate. When Mr. Fiegen was introduced at the Jefferson Jackson Dinner, the 150-word introduction he was asked to provide had been edited to remove his declaration of support for Mr. Sanders.

Mr. Fiegen criticized the way the dinner was executed.

“When we got to the JJ dinner and arrived at HyVee Hall, there were around 3,000 Bernie supporters with us. There were only seven metal detectors clearing four people per minute. I was in the middle of the crowd and it took me over two hours to get into the dinner. The program was supposed to start at 7 p.m., but I didn’t get in until 8. I was told that many supporters gave up and didn’t come into the hall. It’s very disappointing to me because as I travel to different counties in Iowa, it is apparent we’re a very old, grey party. There are rallies I go to where, at 57 years old, I’m the youngest one in the room. We badly, badly need more young people to get involved with the Democratic Party. It was so disappointing that the Iowa Democratic Party was either so inept or purposefully limited the number of metal detectors to discourage people from coming into the hall.”

Mr. Fiegen and other Sanders supporters were also disappointed in the oligarch structure that segregated audience members.

“Around the stage they had tables for dinners that were $1000 a plate. The outer ring, where I was, had tables for $120 a plate. For people and students who couldn’t afford [to sit] there, they sold them bleacher seats for $50 a ticket,” Mr. Fiegen said. “The thing that insulted me with the people on the bleachers, is they put up barricades so those people couldn’t mingle with the people at the tables. It gave very much the impression that they were second class citizens.”

During his introduction, Mr. Fiegen carried a Bernie Sanders sign on stage. His announcement led to an uproar of applause from the hall.

“The only part of the hall that was conspicuously silent were the people at the $1000-a-dinner tables in front of the stage. They sat there like they were cast in concrete. That further emboldened me. I decided to hold the sign above my head throughout the introduction. I wanted to communicate to the party machine people and the people at the $1000-a-plate tables that Senator Sanders’ campaign is a political revolution, that I am part of that revolution, and we intend to remake not only our party, but our democracy and our country, and that there are more of us than them.” 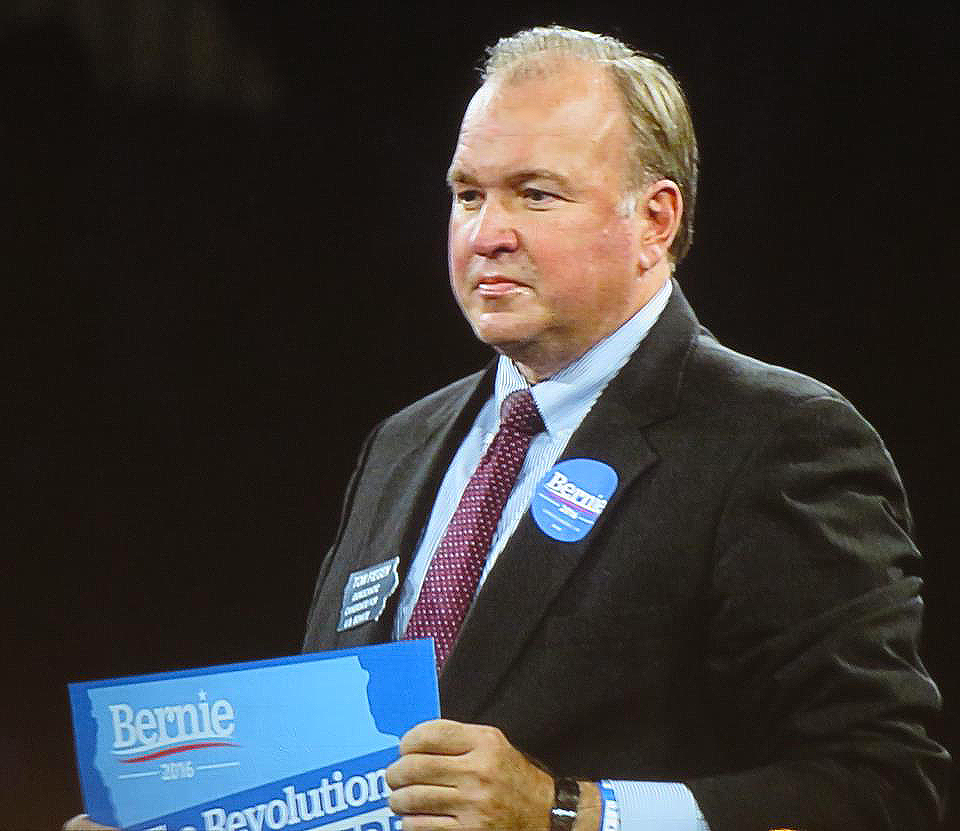