Jay Fielden is the man behind the awesomely tawny Town & Country magazine. As he states in the magazine’s recently released video, the renaissance man has hunted wild boar in Tuscany, tasted mythic bottles of petrus in magnum format, has his suits made in Paris and can even speak franglais. The video, which celebrates 170 years of publication for the magazine, stars Mr. Fielden alongside his entire staff. “I can say that I’ve never had any real experience filming something,” Mr. Fielden said over a brief chat on the phone from his office in Hearst Tower, where the video was also filmed. “Some TV, but not quote unquote ‘acting.’ ”

The editor-in-chief quickly harnessed his acting skills, and produced this 4 minute gem in homage to director Wes Anderson (who we also recently lauded for his taste in corduroy jackets) in just one day. “I had this idea that sprung into my mind, and wrote the script on a Tuesday and we shot it on a Friday,” he said. “I don’t think I realized the ambition of doing a commercial with an uncut shot. I envision the whole thing as uncut like the Wes Anderson American Express commercial, which he makes looks so easy. When I started talking to Warren Elgort, who directed this video, he gave me a sense that I should be a bit more afraid. We kept that one long first shot as a very long cut which took only like 16 takes to get.”

Ultimately it was hit. “Tommy Hilfiger asked me who produced it, and I said right here at home,” Mr. Fielden said. Among the many hilarious scenes in the video, we see Web Editor Sam Dangremond place a new jacket on Mr. Fielden’s shoulders as he enters, Arts Editor Kevin Conley serves him breakfast, and Fashion Editor Nicoletta Santoro is aided by Accessories Editors Will Kahn and MaryKate Boylan in pitching a new “vision.” We even see Mr. Fielden, albeit for a brief second, skateboarding around the office. “Let’s say I try to have credibility with my 12-year-old son by occasionally getting on a skateboard, and scraping my knees and elbows,” he joked. “I’ve been on the wrong side of being good on it, so I’ve never been able to figure out how to do that half loop.”

We can also expect to see more. “This is going to be a series, so we’re going to keep going with this family of characters,” he said. “There are some things we wish we could do again too. I wish I had that piece of toast, but under the circumstances, and this being our first effort, I think we all feel very proud if it.” The first installment can be seen here, or below. 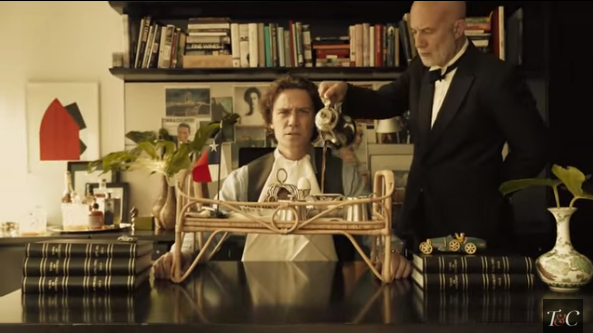