It was a chic evening at a stately Southampton estate a stone’s throw from the aptly named Gin Lane. The sky was streaked with the kind of Hamptons purple that delights artists and hedge fund managers alike. At dinner, I found myself seated between two women I call society mag pop-ups.

After a few gin-and-tonics, the subject turned from those trading spouses to swapping college application stories.

“When I was in high school I just went to Stanley Kaplan,” I offered benignly. “What does it take today?”

“I have no idea,” Southampton Social said, shrugging. “My son goes to boarding school and they take care of everything there.”

“Not in the city,” Auburn Expat explained. “Mine go right from school to their multiple tutors. It’s grueling what these kids have to do today.”

“How many tutors do you employ?” I asked innocently.

“Richard,” she pleaded, “the one thing you cannot quote me on is college tutors. Please, you cannot write about it.”

“Why not?” I asked, perplexed.

“I still have a child in ninth grade,” she said, turning her back on me. What stayed with me was the look in her eyes, at once terrified and pitiful.

Over the next few weeks, I noticed that while no sexual peccadillo was seen as too outlandish to discuss over dinner, everyone clammed up the moment I broached college tutors.

It seems that getting into a top school has become the ultimate expression of pull and pride, but to suggest that one’s kid needs help is to admit that the child is somehow imperfect—a disclosure that belongs nowhere on the typical New York power parent’s press release.

It seems that getting into a top school has become the ultimate expression of pull and pride, but to suggest that one’s kid needs help is to admit that the child is somehow imperfect—a disclosure that belongs nowhere on the typical New York power parent’s press release.

I was giving up hope of getting anyone to talk openly when Dana and I were weekending at The Sagamore on Lake George, where I ran into a vague acquaintance who’d had too much tequila to be reserved.

Playing with her turquoise and gold Van Cleef necklace, her décolletage bursting out of her Ramy Brook silk top, she mentioned that her oldest son was heading off to college. “Where is he going?” I asked.

She mentioned a second-tier Ivy.

“Thank you,” she said, beaming. “But just you wait. The college year is the worst. When the time comes, let me know and I’ll give Dana our tutors—but don’t tell anyone.”

“I don’t understand. Why the secrecy?”

“Oh, you will. Everyone tries to pass off their children as brilliant,” she explained. “It’s like when the girls go off and get their nose fixed in junior year in high school and the mother says the daughter broke it in a skiing accident and had to have it fixed. As if!” she said, guffawing from what might have been personal experience.

“What do these tutors do?” I asked casually.

“They create a story, a ‘narrative’ for your child. You are selling your child as a product. You should know. You’re in the advertising business.” She arched a well-groomed eyebrow.

“Yes, but my children aren’t beverages or lipstick,” I argued.

“Oh, please,” she said, “these colleges get over a trillion applications. Today the average kid from New York City private schools applies to over 15 colleges.”

“How much does this all cost?”

“As much as private school,” she said, shrugging.

“You can print it and quote me.” She stood and staggered away pickled from tequila. “Tell them all I just got my breasts redone, too, and I’m ready to partaaaaaAAAY,” she said, stumbling away from the table and spilling the contents of her Birkin onto the gravel.

“When they see C+ students with a perfect ACT score, they know the child has been tutored,” Madison Avenue Matron, a newly minted empty-nester, declared at another Southampton soiree.

“When they see C+ students with a perfect ACT score, they know the child has been tutored,” Madison Avenue Matron, a newly minted empty-nester, declared at another Southampton soiree.

“How do you feel about your life change?” I asked.

She adjusted her cashmere sweater set. “It’s only been a week or two with the kids gone, so I don’t know. We’ll be spending a bit more time together,” she said glumly, eyeing the balding banker in a cable-knit sweater and dad jeans next to her.

“At least I don’t have to pay for those college tutors anymore,” he offered.

“I think it’s more,” a brunette said, joining the group. “At the end of the day, it’s a quarter million.”

“Why so much?” I asked incredulously.

“My daughter needed the help.”

“I’m not sure if it was the tutors or the donation to the building campaign,” she said, her husband’s ears perking up. “But she got into her top three choices.”

“At least we admit it,” the brunette stated. “That one over there?” She pointed to someone I know quite well. “She had the same tutors as my daughter but she would never admit it. I used to see the girl trying to slip out the side door into her father’s SUV.”

“Sounds like a scene from Mission: Impossible,” I marveled.

One afternoon, I was squeezing tomatoes at
a specialty store I call the Museum of Fine Food when I ran into Madame Crème Brûlée, a chic, blonde, old-money heiress: chignon, vintage Kelly bag and all shades of vanilla cashmere.

“So someone gave me the number of a famous tutor who lives [in the boroughs],” she said. “He told me that he was already fully booked till 2017! He charges $1,550 an hour and doesn’t even meet his students in person! He does it over FaceTime.”

She plucked celery from the bin, continuing. “He told me it was too late for Bootsie but that I might consider booking him now for the 11-year-old.”

“How are you going to pay for it without your husband knowing?”

“I was going to sell a few of my mother’s Hermès bags. The crocodile ones from the ’60s command a premium and my mother had quite a collection. A few Liebers, as well.”

“My husband is too old-school to believe in tutors. But it’s no longer the old-boy network.” She sighed as she air-kissed me. “We need to keep up with the new-money families, but you already you know that, with some of your friends.”

I was doing a morning beach walk when I ran into a longtime advertising colleague, whose older children have gone through the college-entry process.

“People don’t like to talk about their children’s tutors and advisors because they don’t want to share. College admissions is a death match,” he said, obviously speaking from experience. “There are only a few slots available at the best colleges and if a parent gives you their tutor, it might backfire. No one wants to spend all this time and money and then have their child only get into SUNY while someone else’s child takes their place at Penn.”

He continued: “You’re dealing with some of the most competitive parents in the country and if their child doesn’t get into an Ivy there is a sense of failure. And failure is not an option.” He shrugged.

“You’re dealing with some of the most competitive parents in the country and if their child doesn’t get into an Ivy there is a sense of failure. And failure is not an option.”

“Why do you think they’ll talk to me about sex, but not about college tutors?”

“Because there’s no lack of available bed partners,” he said, pausing dramatically, “but there is a limited supply of acceptances.”

The evening flight to Fiumicino is always a
favorite as I get to unplug for a few hours and catch up on sleep. After a day in the Eternal City, I hired a driver to take the team to one of the most renowned Tuscan wine estates, where we were developing an advertising and marketing campaign.

After being shown to our suite in the main villa, I showered, rested and joined the family for lunch on the terrace, served en famille under the camera-ready pergola. The vintner and his stunning wife welcomed us to a table beautifully set with a vintage lace tablecloth, 19th-century china and heavy silver cutlery. The chic grandmother (school of Jacqueline de Ribes) presided, and the three children, ages 12 to 15, sat quietly during the adult conversation, sans screens. After a fabulous lunch of fresh lasagna with pesto, each helped the household staff clear the plates and dishes with grace and charm. Then their 15-year-old son pulled up in a small truck to take everyone to the main part of the winery, located on an adjacent estate.

“Don’t worry, Richard. He’s a good driver.” The father smiled at me with an amused eye.

“How old is he?” I asked as the son opened the door with uncommon gallantry.

“Fifteen. But he’s been driving for two years.”

In the truck, I asked Paolo if he had ever heard of college tutors.

“Yes, we’ve heard. It’s what all you people do in New York. Here, they have an education in life,” he said, shrugging. “They may do a little studying with a teacher after school, but we are more interested in the wines and the terroir.”

“Tuscany is not New York,” the mother said, laughing as her son stopped the truck in front of the legendary winery and stepped out.

“After you,” he said, extending a hand to me.

“Perhaps there is a tutor to help New York children acquire such lovely manners,” I said, noting the sharp contrast between raising test scores and raising children. 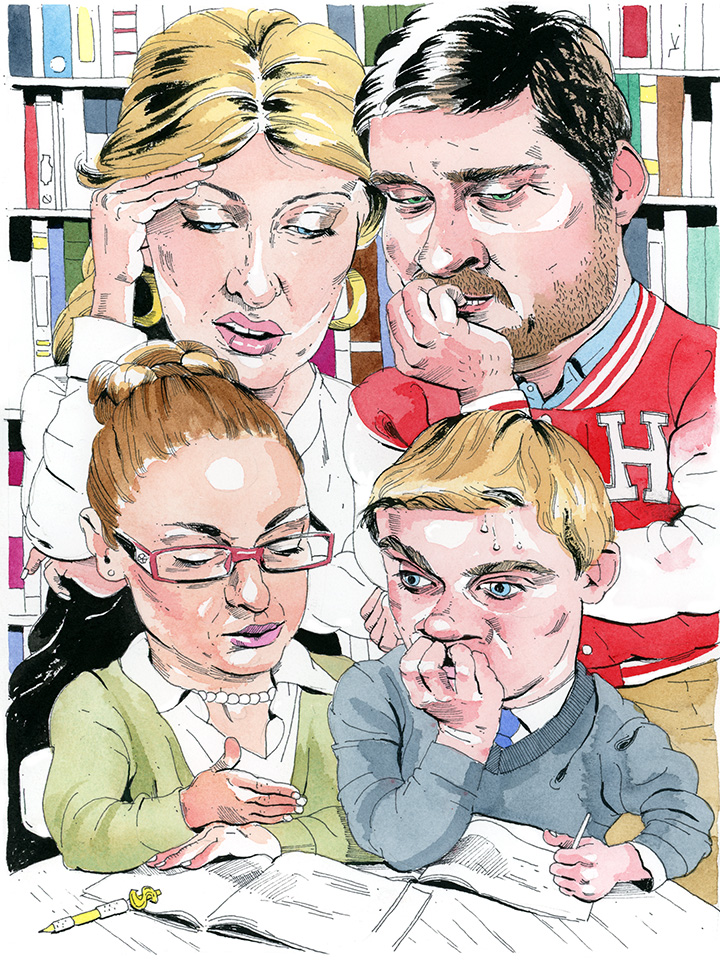