Peep Show, arguably the funniest single camera, POV-shot sitcom in history, is back for a brand new (and final!) season after three years hiatus. If you haven’t been inducted yet to the cult of David Mitchell and Robert Webb, you probably aren’t living in Britain, where the Cambridge BFFs star in everything from sketch shows to panel programs to Mac commercials. But by far the best product of their collaboration is Peep Show, about repressed middle manager/ history buff Mark Corrigan and his slacker roommate Jeremy (“Jez”) Usbourne. The show’s fishbowl lens style and interior monologuing takes a little getting used to, but fans of It’s Always Sunny in Philadelphia will recognize the strong current of nihilistic mayhem that the frenemies manage to evoke where ever they go, often aided by Jez’s other best friend/music partner/drug addict “Super Hans.”

The show, which is airing its final season on Britain’s Channel 4, picks up where the last season left off: Mark is now single after his girlfriend Dobby moved to New York; he’s also kicked out Jez, who he blames for the loss of Dobby (since Jez decided he was also in love with her and tagged along to the outer banks picnic where Mark planned to propose). With his new roommate Jerry, Mark has settled down to a bleak existence of William Morris documentaries and a thankless job at a new bank with his former boss, the lunatically confident Alan. Super Hans is getting married, and his stag night causes friction between his fiancee and their bathtub subletter, Jeremy.

That’s about all you need to know, other than the entire previous eight seasons are on Netflix and you should watch them immediately. Or start right now! We’ve got “The William Morris Years” right below.
[youtube https://www.youtube.com/watch?v=AOW-6frJWdw]

Peep Show airs on Wednesday night on Channel 4, so…you might as well wait till someone uploads it to YouTube. 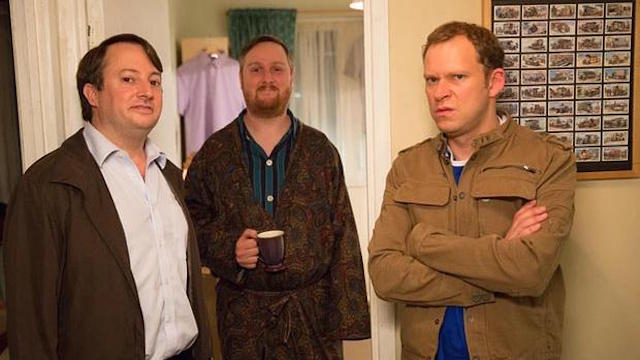