The first thing to know about the contending claims in the vast domain of reefs, shoals, and atolls known as the South China Sea (SCS), is that, despite its name, it’s not part of South China. In fact, China’s claim that almost all of the SCS’ watery vastness comprises its territorial waters is deemed by experts in international law to be spurious, and that also goes for its claim on four artificial new islands, some 90 football fields worth in all, that China has in the last three years created out of dredged seabed.

It was at one of those newly created islands, known as Subi in the Spratly Island chain, stretching between the Philippines to the east and Vietnam to the west, that the U.S. sent a destroyer a couple of days ago, bearing an explicit message to China about freedom of navigation, and an implicit message as well, one aimed at the small, weak countries in the region worried about China’s growing power. The U.S., the message said, will not be intimidated by China, or its semi-jingoistic rhetoric, nor will it be deterred from asserting certain principles, in this case that artificially created islands built in disputed areas do not come with 12-mile territorial limits.

That brings us to the second thing to know about the SCS: naval destroyer or not, it’s going to be very hard for the United States, or its smaller regional friends, or any combination thereof, to stop China from asserting its claims and having its way in one of the world’s busiest sea lanes.

Beijing has promised not to station armed forces on any of the disputed islands, and it probably won’t, at least for the foreseeable future. But the new islands are there along with the airfields that have been built on three of them. They are, as it’s now being put, “facts on the .”

China is engaged in certainly the greatest military buildup on the planet since World War II. Among the weapons it is perfecting is the DF-21D anti-ship ballistic missile, which would be aimed at American aircraft carriers in the event of war.

How bad is this for the United States? In one important respect at least China wants the same thing as we do—the freedom of navigation to bring the 80 percent of its crude oil that passes through the SCS from the Middle East. It also wants access to the 7 billion barrels of oil that are estimated to lie under the seabed; beyond that is something less tangible. The South China Sea is the immediate area beyond China’s borders where it is projecting its newly acquired power. Or, as the writer Robert Kaplan has put this, China is “engaged in an undeniable naval expansion,” because “it is through sea power that China will psychologically erase two centuries of foreign transgressions on its territory.”

This doesn’t have to be bad, except for the fact that the other countries of Southeast Asia look to the United States to deter China. That’s what the much heralded “pivot to Asia” undertaken by the Obama administration means. It’s a declaration that countries like Vietnam, Malaysia and the Philippines won’t stand alone in the face of China’s expansion. But because of China’s ambitions, it’s also a certainty that China will occasionally test America by building new islands, cutting the cables of Vietnamese research vessels, warning American spy planes to get out of what China will contend are its military zones.

That’s what makes the SCS a worrisome place. China doesn’t want war. Its steps, like the steps taken by the U.S., are aggressive, but they are never so aggressive as to risk actual shooting. But the Chinese are also students of Sun Tzu’s greatest epigram, which is that the supreme art of war is not to subdue the enemy by winning the battle; it is to subdue the enemy without fighting the battle.

China is engaged in certainly the greatest military buildup on the planet since World War II. Among the weapons it is perfecting is the DF-21D anti-ship ballistic missile, which would be aimed at American aircraft carriers in the event of war.

The strategic goal is what’s called area denial: to make it so costly to the United States that it would have to stay out of areas within a few hundred miles of China’s coast, including the South China Sea. China’s aim is to subdue the enemy without fighting the battle. And that’s why it will take more than a single destroyer passing a single artificial island to pivot convincingly against China’s expansion. 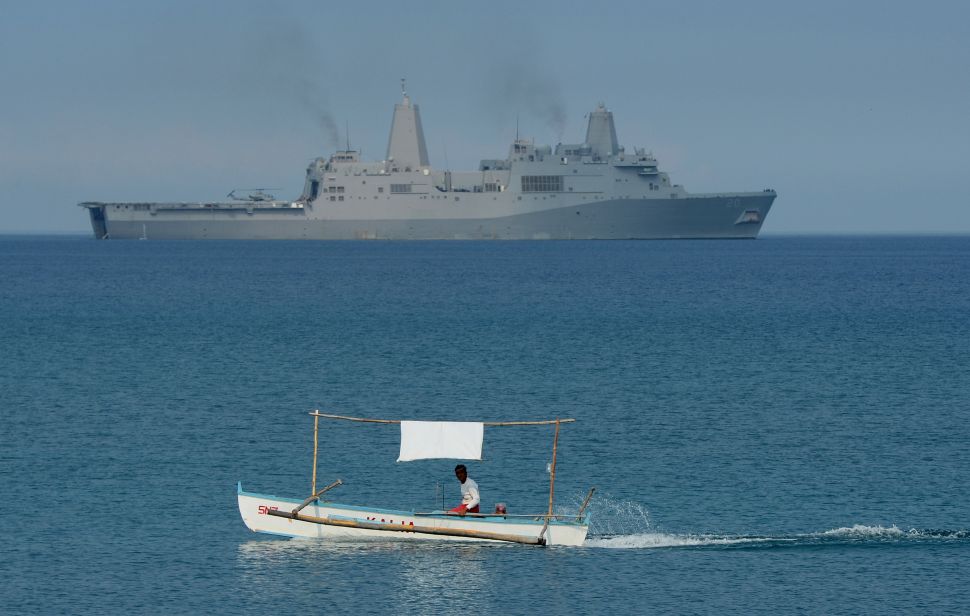