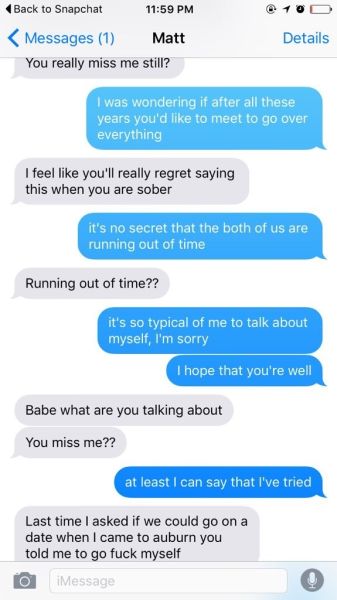 As a millennial pop-culture junkie and former political operative/consultant, I’ve seen my fair share of society’s obsession with “going viral.” In my political past life, I met countless candidates desperate to make a “viral video” to promote their campaigns. Each time, I would silently contemplate asking if they happened to have a cat who plays piano, or a kid with an upcoming dentist appointment, but my better judgment kept those thoughts where they belonged – in my head.

I bring this up because it’s as if we, as a society, are working really hard to force interactions to become viral when they would otherwise be at best un-noteworthy and at worst cruel.

Yesterday morning, after completing some work, I browsed my Facebook feed to see what was up, and noticed Buzzfeed pushing an article.

I clicked through to screen grabs from Auburn PR student Mary Caldarella’s phone (whose battery was perilously low to be attempting such a lame trolling effort) with lyrics from Adele’s latest hit song “Hello.” The texts mostly consisted of her ex boyfriend “Matt” asking confused questions about what she was talking about, and he eventually acknowledged that he should be sorry for some thus far undisclosed wrong he had done to her. The article then posted a tweet that someone had sent her way celebrating that she had gone viral, to which she replied, “Only good thing he ever did for me!!!!!!!!”

As a society, we have got to stop celebrating these smug, self-satisfied acts of passive-aggression

On its own, texting an ex solely to screw around with them is pretty obnoxious and childish regardless of what the person has done. I’ve always tried to treat my exes with dignity and respect, regardless of how I’ve felt in the aftermath of the breakup, because I believe that to do otherwise would be a poor reflection on my character. Those are decisions that I have never regretted.

As a society, we have to stop celebrating these smug, self-satisfied acts of passive-aggression. To begin, Ms. Caldarella’s texts weren’t even funny, save for the fact that on her side they consisted exclusively of Adele lyrics, and on Matt’s side they consisted of utter confusion. So, essentially, Ms. Caldarella is a budget plagiarist, and Matt is clueless. This makes for good Buzzfeed?

All we are seeing is a guy with egg on his face, and some girl showing the internet that she really got one over on him.

Beyond that, Matt’s responses suggest he has some level of affection remaining. I can’t say for sure, but he calls her “babe” and mentions that he had previously asked her out. Like I said, we don’t know what happened in their break-up; for all we know, Matt could be a douche-canoe on two feet. But that’s the point – we don’t know. All we are seeing is a guy with egg on his face, and some girl showing the internet that she really got one over on him.

Another troubling aspect of these sorts of “news” events is that we are, again, celebrating a breach in privacy. My good pal Bethany Mandel fired off a polemic in The Federalist a few months back, excoriating the #PlaneBreakup trending, which followed the dissolution of a relationship at 30,000 feet. Bethany notes that, “Unfortunately, in the age of social media, what is personal is now public,” and nails what is wrong with these types of viral “news” stories.

I’d argue this is even more insidious than the #PlaneBreakup, as its intention is very clearly to humiliate Matt.

It’s bullying – plain and simple. And during a time where public attitude has such an awareness of the issue that it is actually being legislated in states across the country, we, and the media, cannot in good conscience celebrate one person taking advantage of another’s gullibility to get their 15 minutes of fame.

The bottom line is that we can do better. There is so much content, so much commentary, so many smart folks working to create that we can certainly do better than celebrating the mediocrity of some college student who is mad at her ex-boyfriend and wants to get famous telling people about it. Let’s stop giving these sorts of petty people a platform and start celebrating the ones who are creating things of real and lasting value. 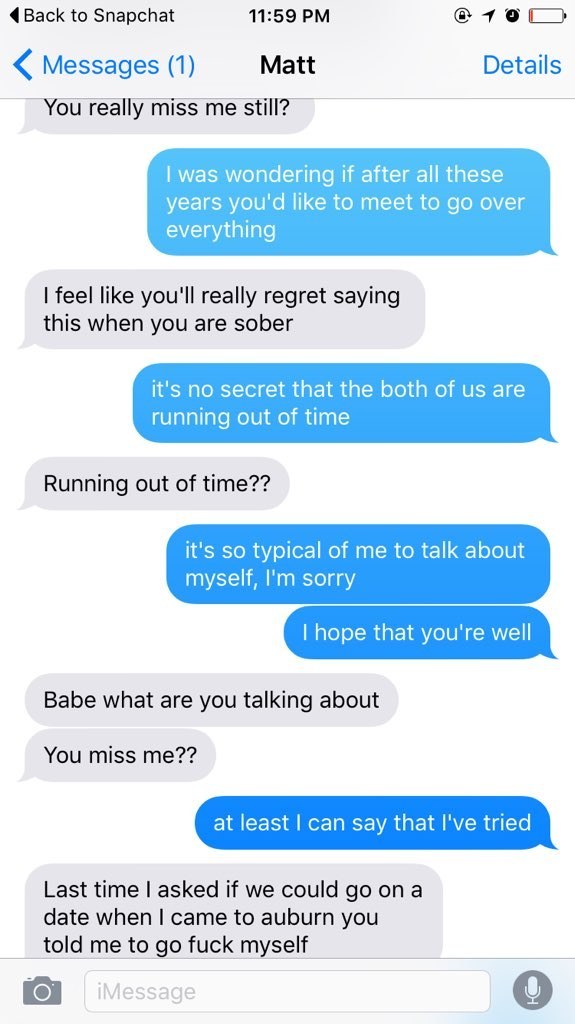