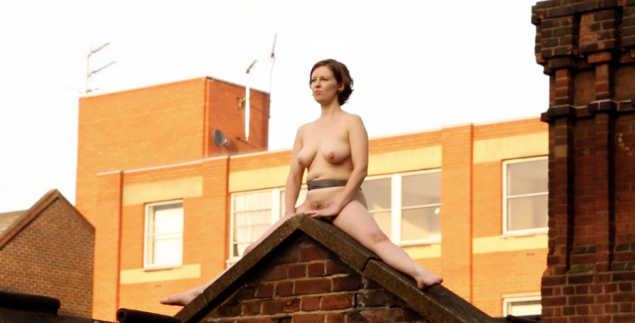 In a feat of fearless endurance, London-based artist Poppy Jackson climbed on a London rooftop and—aside from a safety harness—sat completely nude for four hours.

The sit-in was a performance piece titled Site that attracted gawkers and social media fans alike. According to reports in the Daily Mail, Ms. Jackson took a few breaks during her awkward four-hour straddle (not so impressive, really, in the context of other famous endurance performances … right?).

The artist, who has shown at Whitechapel Art Gallery and the Freud Museum (both in London), makes “actionist work exploring the female body as an autonomous zone,” according to her website, which also makes it clear that this is far from the first fully nude artwork she’s made. 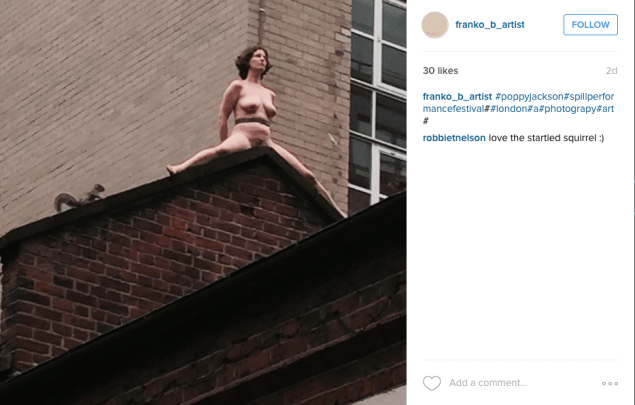 Poppy was, at one point, visited by a fuzzy co-performer.

In a 2014 performance, the artist stood naked and motionless in the corner of an abandoned Police Headquarters and faced the wall continuously for seven hours menstruating. Over the duration of the piece blood dripped down her legs and onto the carpet.

Reaction to this weekend’s performance on social media was mixed, to put it kindly. 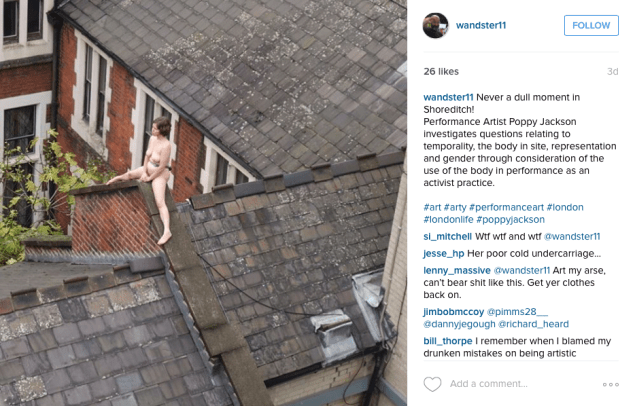 Twitter user @JazzTheSpazz did not mince words. “Sitting on a roof naked is NOT doing ANYTHING to ‘question the temporality of space,'” Jazz tweeted.

So far, we haven’t seen any imitators of this latest nude performance, but we are keeping an eye on the situation.

‘Site’ from Poppy Jackson on Vimeo.