It seemed the most unlikely musical hook-up since David Bowie and Bing Crosby rum-pa-pum-pummed together on the “Little Drummer Boy” in the 1970s. But when Miley Cyrus and Flaming Lips frontman Wayne Coyne united for a spectacular rendition of the Beatles song, “Lucy In The Sky With Diamonds,” which was shown at the Billboard Music Awards in 2014, it raised more than a few eyebrows. But while Bowie and Crosby were an uncomfortable-looking coupling, this odd couple, glitteringly dressed in outfits seemingly straight out of Barbarella, were joyously as one.

After Cyrus contributed to the Lips’ 2014 Beatles covers album, With A Little Help From My Fwends, Coyne and Co. returned the favor, writing and recording her Miley Cyrus & Her Dead Petz record, released for free in August. This fall, the Lips reissue a 20th anniversary deluxe edition of their 1995 album, Clouds Taste Metallic. Miley was 3 years old when it first came out.

Cyrus and the Lips reunited in Chicago, November 19, to begin an eight-show tour that brings Cyrus and the Lips to Terminal 5, Saturday. In Chicago, Cyrus’s costumes included not very much at all—and a prosthetic penis. While this is Miley’s project, she was unavailable to comment; the Observer spoke to Coyne about the duo’s unlikely kinship. And kinship it is, because these happy hippies share more than a passion for exposing naughty bits, wearing shiny glittery stuff and making music. They share a passion for animals: Coyne is a longtime shelter supporter and Dead Petz honors Cyrus’ dog, Floyd, who died tragically in 2014. They also share an ideal of living and loving with no separation between the two. Because love is all you need. Now, did they record a cover of that yet?

Are you and Miley kindred spirits?

I wouldn’t have thought that until I met her. When people like each other they find all the reasons why they are the same and ignore the ways they aren’t. We absolutely like the same things. [Giggles.] I think that’s why we like each other so much.

You two seem to work well together, and also have a lot of fun together.

There’s been a lot of great partying and fun in between all the work. So it’s a great way of seeing what she’s all about. It reminds me of being around Damien Hirst. If you’re around Damien Hirst, you do a painting. I’ve only been around him one day, but after one day you walk out with a painting, because that’s what we’re doing. The same is true with Miley. We’re not just talking about music, we talk about it and then we go and do shows together and make music together. We do the things we’re into. That’s why we like each other so much, because we get to do the things we love to do.

People don’t realize the great lengths we go to in order to make these things happen. We did it during one of her concerts. It wasn’t like we set this whole thing aside and worked it out. We told the audience we have to do this three times and it’s going to broadcast two weeks from now. It was not easy and it wasn’t what people wanted, and it really fucking worked. That’s to her absolute credit that she’s willing to try. People are in trucks picking shots: she’s picking shots; I’m picking shots. It’s beyond proactive. It’s like, this is my shit, let’s do it this way. Not in a demanding “fuck you, I know better than you” way. It’s very much a “let’s make this as good as it can be” way. I think it shows. I know that standing there I felt like “Jesus Christ. I’m this weird old man in this weird suit standing next to Miley Cyrus.”

‘I felt like, “Jesus Christ. I’m this weird old man in this weird suit standing next to Miley Cyrus.” ’

Does the relationship ever feel just a bit strange?

I know it seems strange or seems impossible to some people. It’s like, how the fuck? Why the fuck would you guys even care about each other? But the reality is that she is not like the way people think she is and I’m probably not the way people think I am either. We’re just people who love music. I really love her. I’ve been around her and seen the way she works. She’s just fuckin’ cool. We get these weirdoes involved and have fun and get to know each other. If you’re in my world then that’s what we’re going to do, that’s how we get to know each other. That’s how we got to know Miley Cyrus. If you’re in Miley’s world you’re going to make crazy music and get tattoos with her. 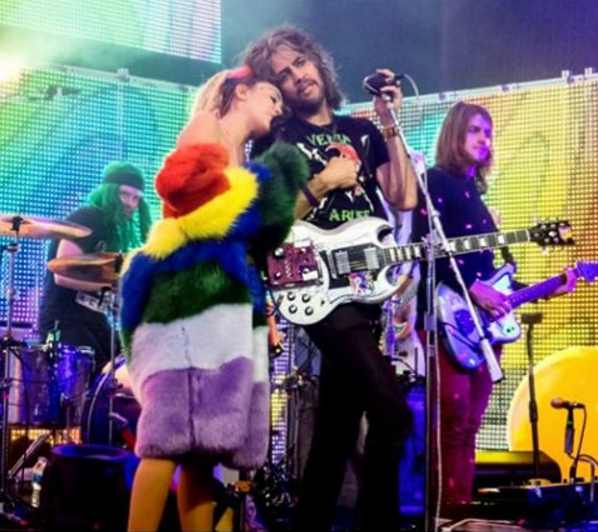