Scrolling through social media this morning, I couldn’t help but notice two distinct kinds of posts from within the last day: those that were about Paris and those that were not. Those about Paris overwhelmingly tended to be stock images—of the Eiffel tower, of movie posters from Paris J’Taime, of some version of the French flag or colors—along with variations of the same phrases telling the people of Paris that we’re thinking of them, mourning with them, taking to social media in an unequivocal global show of support for them.

Are Facebook posts about Paris just another way for people to assert themselves into the conversation in a one-ups-man sort of way?

I couldn’t help but wonder as I read each one—thoughtful, sure, but also undeniably more than a little canned and certainly repetitive—whether the intention behind all of them could possibly be sincere, or whether it was just another way for people to assert themselves into the conversation in a one-ups-man sort of way. It was almost like: I’m thinking of Paris; no I’m thinking of Paris.

Of course we’re thinking about Paris. Do we really—each and, it seemed, every single one of us—need to repeat the same trite words or post the same stock photos to prove as much? Is it not enough to just feel anymore, without taking to social media to put those feelings on display?

Of course it’s not—we know that. For many people, if it’s not on social media, it hasn’t happened—that’s the new normal and how we process events and memories and feelings. And yes: It’s a way for people to insert themselves into a conversation happening in the world at large; to avoid feeling left out.

They may not be entirely wrong. On one hand, there’s nothing wrong with being happy, or posting scenes from that happiness, while some part of the world is suffering some tragedy. Life goes on, and that’s what gives us hope. Still, there was something a little unsettling about those social media posts that appeared as if Paris wasn’t bleeding. At a grinning selfie of a colleague taken last night at a party, I stopped to wonder if maybe she somehow hadn’t heard the news. Or, worse, maybe she had.

The most acceptable posts in the wake of the Paris massacre seem to be the ones offering original content: new information or insight or new images. Like Jean Jullien’s cartoon take of an Eiffel tower peace symbol hybrid, which appeared on feeds from comedian Amy Schumer to the Instagram for New York magazine, or florist Bridget Beth Collins’s rose-petal depiction of the Parisian landmark. Also impactful: recognition of the event in a way that felt genuine and fitting to the person posting, like that of the humor account “Texts from Your Ex,” which ran a text-only box that was uncharacteristically sincere along with the caption: “taking the day off of joking around to send our love to Paris.”

The collective show of support for Paris—no matter how well-worn the messages start to become—may actually help create a feeling of unity.

Of course, not everyone’s an artist. Not everyone has a way with words. There’s nothing wrong with wanting to participate in the conversation even if you don’t have something monumentally original to add. Social media is about giving people voice, and sparking conversation—and, well, if what’s on there troubles you, it’s easy enough to turn off.

Meanwhile, carrying on with business as usual, despite the horrific events that have happened, is okay. It really is. And not just because it’s unavoidable, but also because doing so is a critical part in starting to recover. The collective show of support for Paris—no matter how well-worn the messages start to become—may actually help create a feeling of unity that is an important step towards healing. It may help convey the sense that, if something similar happens to us, there will be a world out there thinking of us, even if we aren’t able to access it. In the best case, that’s what the people of Paris are feeling at this moment. We can only hope. 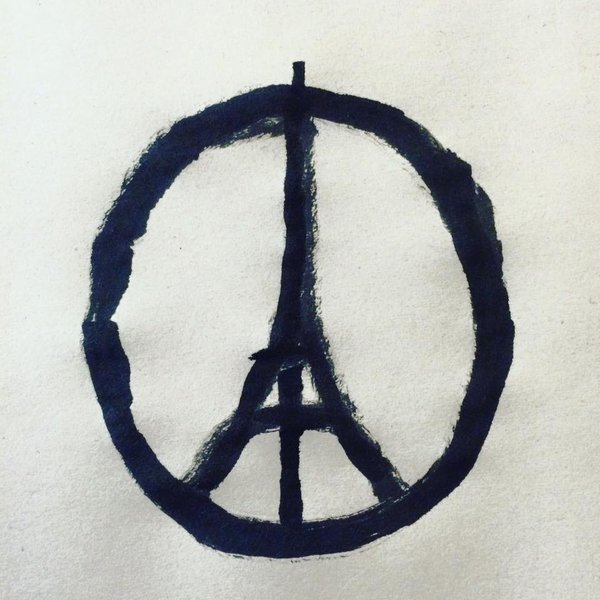