Between HBO debuting its upcoming show Vinyl, Garth Risk Hallberg‘s much hyped novel City on Fire, and Patti Smith’s M Train—all set in 1970s New York—the era is definitely having a moment. It’s no coincidence then that photographer Bill Bernstein, perhaps best known for being Paul McCartney’s personal photographer, is also publishing his own book of photographs from the decade, taken at the height of the city’s disco years.

It was when Mr. Bernstein, then in his late twenties, was sent by the Village Voice to photograph an awards ceremony for Lillian Carter (President Carter’s mother) in December 1977 at Studio 54 that he stumbled across his inspiration. As the ceremony came to an end, the photographer noticed the club regulars rolling in—a stark contrast to those in attendance to toast Carter. With just $40 in his pocket, he bought leftover Tri-X film from another photographer and stayed for the rest of the night.

“That era was the safe haven for inclusiveness and acceptance.” Mr. Bernstein told the Observer. “There was a time back then in ’79 where real homophobia existed outside the door of the disco, but once you walked through the door, it’s like the rules changed.”

Picking up the project again in 1979, Mr Bernstein snapped the faces of the clubgoers every night for months. The images, rarely published before, appear in the new book Disco: The Bill Bernstein Photographs, out November 15.

“I knew what originally drew me into the project wasn’t the celebrities, it wasn’t even the music and, you know, it wasn’t the things that drew a lot of people in like dancing or the drugs, “ Mr. Bernstein explained. “What drew me to this was really the diversity and the acceptance that I saw at the clubs at this period.”

Instead of focusing on the celebrities who frequented disco’s most popular nightspots like other photographers, Mr. Bernstein looked to the everyday regulars that inhibited the spaces across the city. His haunts included Better Days, Empire Roller Disco, Xexon, and 2001 Dancefloors.

Years in the making, the book was initially slated to publish five years ago, with a small press in the United Kingdom. However, when the press suddenly went out of business, the project went back on hold. As a result some of the images in Disco are also featured in Night Dancing, a book that that got shuffled from editor to editor. Mr. Bernstein, though, is much happier   with the timing of the upcoming book.

“Five years ago was wrong. This is perfect,” Mr. Bernstein said. “The synchronicity of this whole project has been astounding.”

Returning to the photographs 35 years later, Mr. Bernstein was surprised to notice a few similarities with the present day.

“I didn’t understand it then, but I now believe that this era was a short lived preview of a world of inclusion that we are just now beginning to bear witness to,” he writes in the foreword to Disco.

“People loved having their photo taken at discos,”  Mr. Bernstein recalled, and wonders if anyone will spot themselves in the book. “It’d be interesting to hear their story and see if they recognize themselves.”

While he also shot a few celebrities like Andy Warhol, the fashion designer Halston and Studio 54 owner Steven Rubell, they never truly captured his attention. “I have a shot in the book where its about a dozen paparazzi taking a picture at a table,” Mr. Bernstein said. “I was much more interested in that scene than who they shooting.”

90 percent of the images in the book were taken in 1979. Without trying or realizing it at the time, Mr. Bernstein caught the end of the era of disco.

“I think this book sort of pushes the limits a little bit in terms of its content in some places,” Mr. Bernstein said. “I think people will see things that they are surprised to see.”

Disco: The Bill Bernstein Photographs hits stands in the United States on November 15. A selection of images from the book will be on display at a exhibit at the Serena Morton Gallery in London from December through January. 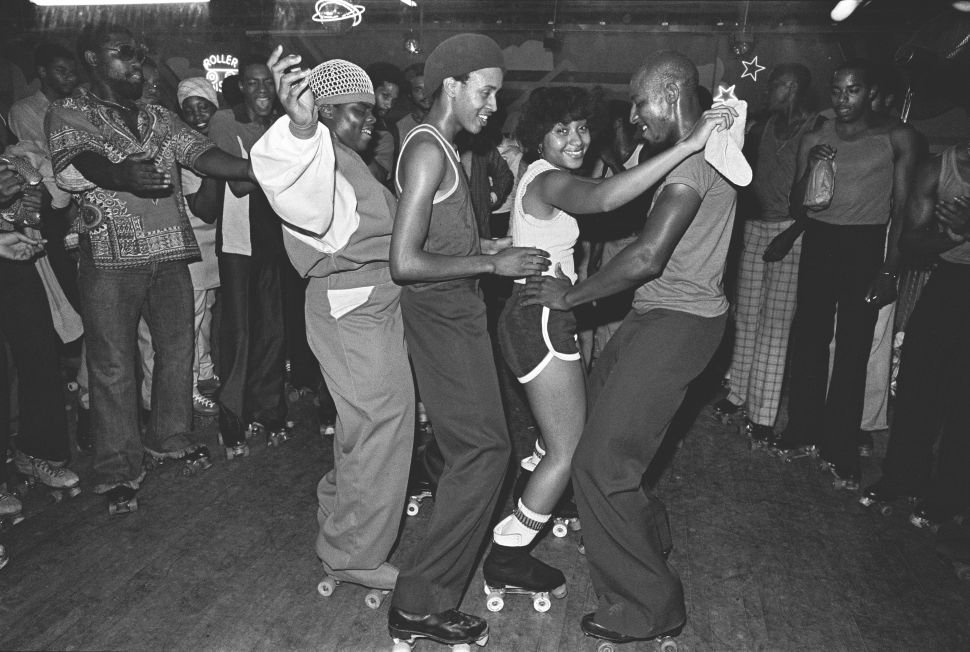