ATLANTIC CITY – Convention-goers at the New Jersey League of Municipalities reveled at after-hours parties but—though the group seemed to be enjoying the nightlife after the long days of sessions—there seemed to be one group that was underrepresented: Republicans.

This Election Day saw significant losses for New Jersey’s minority party. After losses in four assembly districts saw them lose four seats and a failure to pick up seats in competitive districts, the party now holds the smallest assembly minority in almost 40 years. Though Assembly Minority Leader Jon Bramnick held an event on Tuesday night, that event was somewhat isolated amid the schedule of primarily non-partisan and Democratic events.

When asked during his Tuesday event if he had noticed the dearth of Republican events, Bramnick told PolitickerNJ that he “hadn’t been counting.”

Though Republicans were well represented at the week’s session events and at the Atlantic City Convention Center, it took until Thursday—the last day of the conference—for Republican Lt. Gov. Kim Guadagno to make an appearance. As the speaker at the closing luncheon, her remarks were notably bipartisan, calling on both Democrats and Republicans to work together, seemingly dismissing the notion that Republicans will be able to achieve much on their agenda without courting the other side of the aisle.

Another luncheon speaker was Atlantic City Mayor Don Guardian. Once considered the Republican hope for the struggling seaside city, Guardian addressed Atlantic City being “broke” during his remarks, something that drew a chuckle from attendees.

Still, it remains to be seen how the Republicans will come together in the face of this year’s shortcomings and make their presence in New Jersey known. With Governor Chris Christie’s popularity lower than ever in the state, it is possible that the party’s connection to him—particularly as he continues to spend so much of his time out of state due to presidential ambitions—may make it hard to gain traction. On Wednesday, a poll ranked Christie in fourth place in New Jersey among Republican choices for presidential candidate.

New Jersey tends to lean heavily Democrat and this last Election Day proves that the party’s hold is still strong. However, Christie’s initial election in 2009 and reelection in 2013 proves that Republicans are still here… even if you can’t see them. 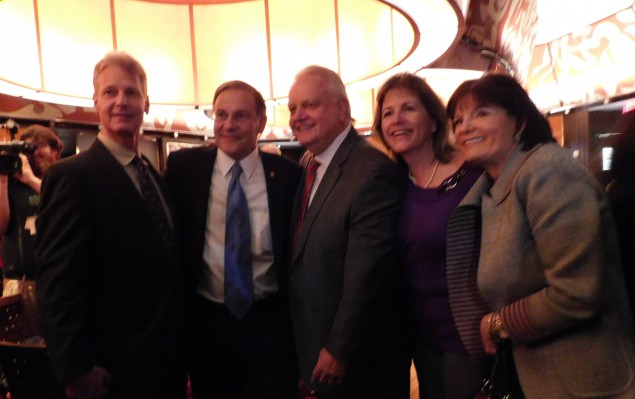