The Mormon Church has recently argued that whatever their views on gay marriage, public officials cannot override the laws of the land. And church leaders have made public calls to support those laws that ensure there is no discrimination in housing and employment for individuals based on their sexual orientation.  This Mormon commitment to the law of the land has even led them to call on Kim Davis, the Rowan County, KY clerk who refused to issue marriage license to gay and lesbian couples, to accept the verdict of the Supreme Court and issue these licenses. This has been in stark contrast to many other Christian denominations who have supported Davis and forcefully opposed the new court decision.

Recently, however, the Mormon Church, with which I’ve enjoyed a warm relationship for a quarter century, has released a new policy ordering Mormon leaders worldwide to clamp down on church members who are in same sex marriages, excommunicating them if necessary. Children of same sex unions, whether biological or adopted, must also be barred membership in the church until they are eighteen, and even when they reach that age, these children may not live in their parents home, and must make a declaration that they oppose same sex marriage if they wish to join the church.

To bar a gay man or woman from communal acceptance and access to religious practice is hopelessly misguided.

This decision, while no doubt motivated by the hope to keep the Mormon population from forming homosexual relationships, will in the end accomplish nothing but push people away from God and religion, and only increase the ever growing numbers of Americans who view religion unfavorably. It’s surprising that such an unjust policy could even be considered.

Let us imagine that a man and a woman are living together outside of wedlock, as is the case with countless couples in the United States. Now, one would traditionally have said that they live in sin. But would anyone, including the Mormon Church, tell them that they are no longer allowed to come to pray? And if their children are born out of wedlock, are they barred from being members of the Church until they turn 18 and run away from home?

To bar a gay man or woman from communal acceptance and access to religious practice is hopelessly misguided.  Since when is one aspect of our lives that is not lived in accordance with biblical teachings an impediment to being in a relationship with G-d in other areas?

But to bar their offspring from membership in the church, and to forbid these children from even living in the same house as the parents who loved them and raised them to adulthood?  Since when did the bible condone punishing children for the sins of their parents?  Does Ezekiel 18:20 not state, “A son shall not bear the iniquity of the father, and a father shall not bear the iniquity of the son.”

I have written and spoken out many times on this, emphasizing that within the Bible there are moral prohibitions and their are religious sins.  Moral prohibitions are those which involve harming another person and which are accepted by believers in God, agnostics, and atheists alike.  These include prohibitions such as murder, kidnapping, adultery and stealing. The common denominator behind all these prohibitions is injury to an innocent party.

Then there are religious prohibitions, which are based solely on faith. These include prohibitions such as eating shellfish, keeping the Sabbath, bringing first fruits to the temple, and homosexuality.

Moral prohibitions that involve harming another individual rightly deserve to be vigorously combatted and condemned by all. However, in our times when religion has been rejected by so many due to religious warms and religious judgmentalism, condemnations and excommunications are the last thing we need.

My own great teacher, Rabbi Menachem Schneerson, the Lubavitcher Rebbe, transformed Orthodox Judaism by teaching that what people mostly respond to is understanding and love.  What I admire about the Jewish faith, and what I would like my Christian brothers and sisters to extract from it, is that we conceive of the relationship with God as consisting of 613 commandments, or 613 strands. Even if we are not living in accordance with God’s will in one area, there are still so many other commandments that we can keep.

Being in a relationship with God is like being in a marriage. If a husband forgets his anniversary, would we bar him from celebrating his wife’s birthday?

As a Rabbi and counselor, I have listened to countless gay men and women who have poured out their hearts to me about how torn they are between their faith and their sexual orientation.  Many have told me how deeply they love God and how much they want to fulfill His will and have asked me how they reconcile and find their place in a relationship with God while being gay.

The Bible consists of 613 commandments, one of which is for a man to marry and have children, and the other is for a man to avoid physical relations with another man. “That leaves 611 commandments for you to observe. That should keep you pretty busy.”

I call on the leaders of the Mormon Church to reconsider their new policy. Though they oppose gay marriage they must never oppose gay men and women and must certainly never be so cruel as to punish their children.

The Washington Post calls Shmuley Boteach “the most famous rabbi in America.” He is the founder of The World Values Network and is the international best-selling author of 30 books, including his most recent, “The Israel Warriors Handbook.” Follow him on Twitter @RabbiShmuley. 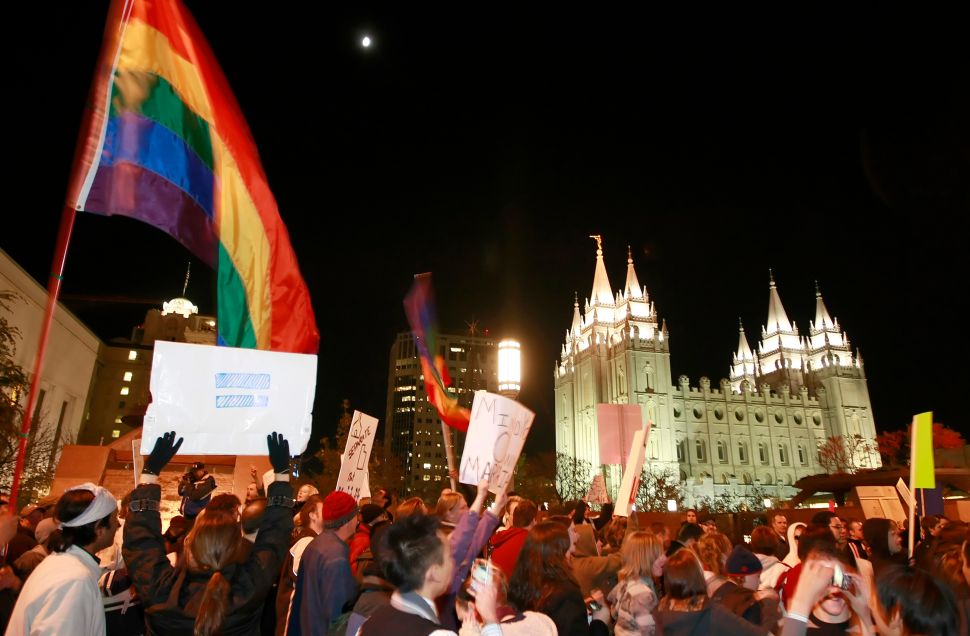